1,928 Minors Have Been Murdered In Mexico This Year 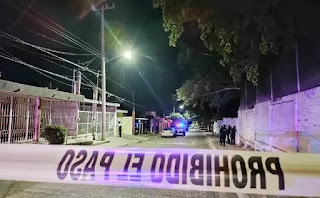 Michoacán, Guanajuato and Zacatecas are the states that lead these crimes against minors.

In Mexico, 1,928 intentional and culpable homicides have been committed against people between the ages of 0 and 18, from January to September of this year 2022, according to the Executive Secretariat of the National System of Public Security.

Michoacán, Guanajuato and Zacatecas are the states that currently have the highest incidence of crime in this area, with 204, 179 and 131 cases, respectively. Meanwhile, in Sinaloa there have been 42 homicides against minors.

With the permanence of the Armed Forces and the National Guard in public security work, it is expected to reduce the number of homicides against children and adolescents, said Raul Sapien Santos, president of the National Council of Private Security.

He explained to Debate that the problem is that we have failed to safeguard the rights of children, since “we have forgotten that we have to guarantee and preserve their life, survival and their own development,” he said. 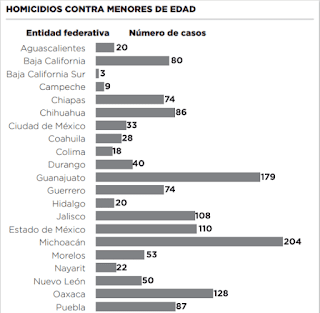 The president of the Council considered that the rule of law has been violated by the decomposition of the social fabric.

“Today the issue of child recruitment by organized crime is getting tougher,” he said.

The solution is not only about providing sufficient budget for municipal and state police, but it is a matter that comes from education in the family, integration, the culture of legality, as well as the approval of the initiative of Decree by which the General Law of Civic and Itinerant Justice is issued, he said.

This law has among its objectives “to bring conflict resolution mechanisms, as well as procedures and services to remote populations with difficult access and marginalized areas

One issue that is currently being neglected is the role of social networks and television programs in inciting and romanticizing the lives of drug traffickers and illicit issues, Sapién said.

We must strengthen the family, access to education, health care, so that children and adolescents can participate in sports and artistic activities, he said.

“All this energy of young people is used in an illegal way by organized crime. He stressed that even that has an explanation, which is that minors do not commit crimes, but rather administrative offenses. Therefore, they are used to shoot, do drug dealing and be part of human trafficking networks where they are forced to perform sex work.

It should be noted that in Mexico, from January 2020 to October 2022, 5,279 minors between 0 and 17 years of age are missing and unaccounted for, of which 1,022 cases were reported in the State of Mexico, which is the entity with more disappearances of minors in that period; in Sinaloa there were 77 disappearances of minors, according to the National Commission for the Search for Persons of the Ministry of the Interior.

“Those children don’t know where they are, we don’t know if they are part of organized crime today, if they were taken to another country or if they were used in the illegal trafficking of organs.

The Secretary of Foreign Affairs, Marcelo Luis Ebrard Casaubón, stated that “violence cannot be reduced with the current volume of arms trafficking… we think that in the United States there have not been important actions in this area.

According to the Attorney General’s Office, 55,996 weapons have been seized in Mexico between January 1, 2020 and September 22, 2022; Tijuana has a record of 3,201 weapons, Ciudad Juarez of 2,179 weapons and Guadalajara of 1,217 weapons. While the U.S. counties that sell the most weapons seized in Mexico are Hartford, Maricopa, Arizona, and Harris, Texas, said the foreign minister.

55,996 weapons have been seized in Mexico between January 1, 2020 and September 22, 2022, all of which come from the United States, according to information from the Attorney General’s Office.