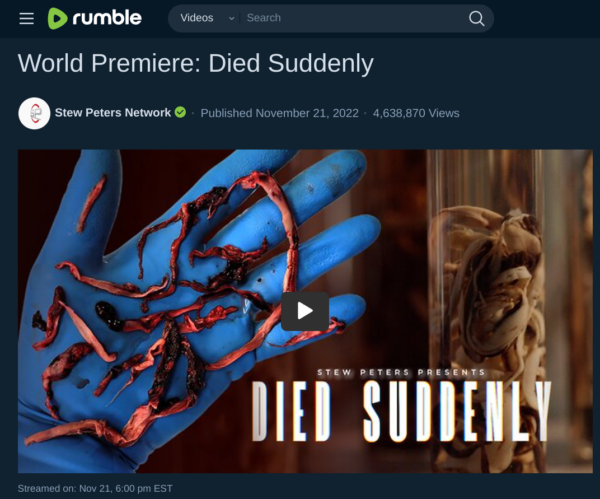 5 million viewers watched the Stew Peters Network’s new Died Suddenly film within the first 24 hours following its release, and the momentum shows no sign of stopping, with viewership tallies continuing to climb and internet users sharing the groundbreaking new film faster than Big Tech censors can take it down.

Died Suddenly, the new film from the mega-viral Stew Peters Network, generated massive traffic in its first 24 hours online, raking in more than 3.1 million views on Rumble alone between its release on Monday evening, and the same time on Tuesday.

During the same time frame, over on Twitter, the official stream for Died Suddenly exceeded 1 million views, while even more were compiled across other platforms.

Directed by award-winning documentarians Matthew Miller Skow and Nicholas Stumphauzer, with help from producers Stew Peters, Lauren Witzke, and Edward Szall, Died Suddenly is blowing the lid off of the genocidal depopulation agenda at the heart of the COVID jab scheme.

“All glory to God, and the award-winning filmmakers, Matthew Skow and Nicholas Stumphauzer,” Peters went on. “They’re truly gifted.”

After its first 24 hours online, the Died Suddenly film went on to rake in over a million more Rumble through Tuesday night and into Wednesday morning.

Still, the views are climbing.

At the current count, more than 4.6 million viewers have watched the Stew Peters Network’s Died Suddenly film on Rumble alone.

Died Suddenly continues raking in massive amounts of views on Twitter as well.

Despite the best efforts of the Big Tech corporation to keep a lid on things, seemingly barring the film from its list of trending topics, Died Suddenly has received a whopping 1.2 million views on the Twitter platform.

In addition to keeping Died Suddenly off of the trending charts, Twitter appears to have de-listed the @DiedSuddenly account altogether.

When the account is searched for by name, multiple other accounts appear, but not @DiedSuddenly, the account from which Twitter users can stream the full Stew Peters Network documentary film.

Twitter isn’t the only Big Tech corporation trying to halt the viewing of Died Suddenly, as the new film threatens to blow the lid off of the narrative so carefully procured by corrupt global power brokers.

On Facebook, users are being censored before they can even post links to the Died Suddenly film, with the social media platform telling them that their post has been “declined,” as if they swiped a bad credit card.

Google has joined in on the campaign to stifle the film as well.

Long notorious for manipulating search results in favor of left-wing interests, Google has visibly tried to push negative corporate media stories about the film to the top of its search engine results.

The censorship effort has apparently been in vain though, as millions of viewers continue watching Died Suddenly and spreading links to the film like wildfire online.