A beginner’s guide for anyone who hasn’t been keeping up with the recent happenings in the fight between Chapitos and El Mayo aligned CDS groups in northern Sonora and eastern Baja California.

If you’ve been following the previous BB articles on this, feel free to skip this one.

There is a region of land that lies between the Gulf of California and the US-Mexican border that is highly-prized and hotly-contested by factions of the Sinaloa Cartel. 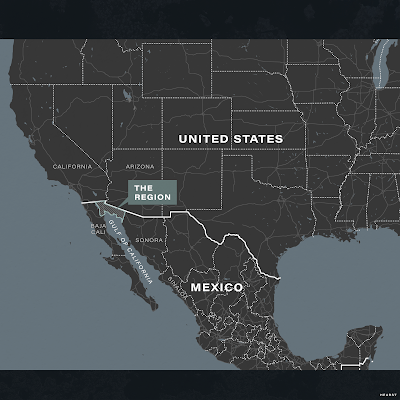 This region is important to the group because it plays a key role in one of their preferred drug smuggling methods according to leaked Army intelligence and Zeta Tijuana articles. 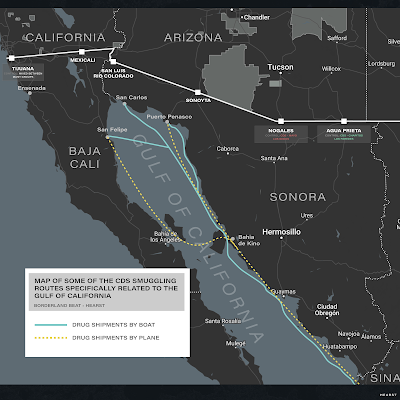 This method entails filling up boats with drug shipment in Sinaloa, which then sail up to unloading points like Santa Clara, San Felipe, and Puerto Penasco, located in the northern part of the gulf. From there, the shipments are smuggled up north, either to:

Maps of smuggling routes published through the Guacamaya leaks of Army intelligence (their map shown here) show there are also a number of unmarked airstrips nearby, which are used to land small aircrafts carrying drug shipments. 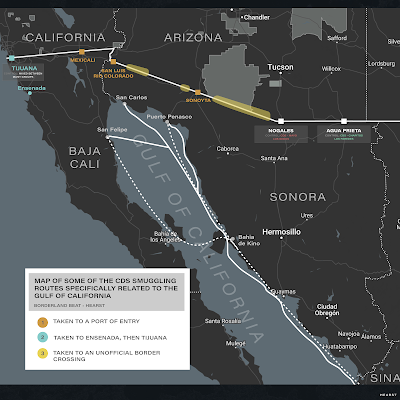 The Sinaloa Cartel is divided into two major factions, on one side are groups affiliated with Ismael Zambada, “El Mayo”, and on the other side are those affiliated with the sons of El Chapo, who are known as Los Chapitos. The most well known among the sons is a man named Ivan Guzman. 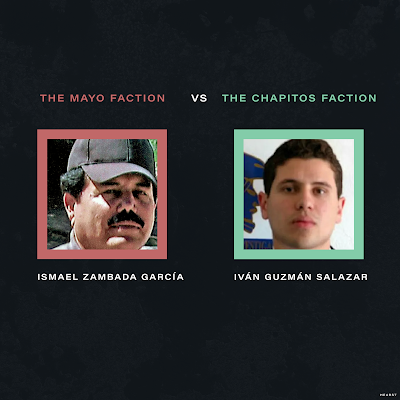 Although both factions are technically Sinaloa Cartel, there are multiple states in which they fight each other to the death for control of territory. This region between the Gulf of California and the US border is no exception.

Mexicali and its port of entry is controlled by CDS – El Mayo, with Mayo’s son-in-law Carlos Felix Gastélum , alias “El Chavó Felix”, in charge of running the city. 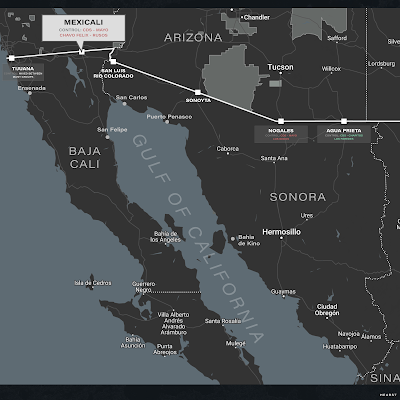 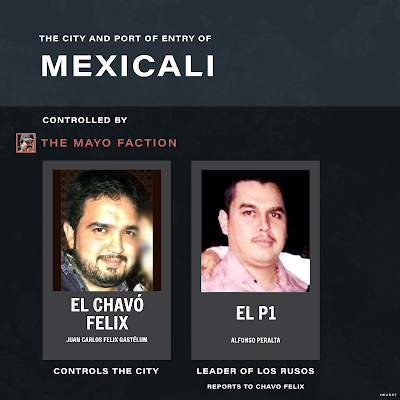 It is (or was) generally believed that the founder of the group, El Ruso, stayed within the state of Sinaloa, in a life of semi-retirement, mentoring his successor Alfonso Peralta, alias “El P1”, who leads Rusos forces in Baja California and Sonora. El P1 is believed to be a direct report under Chavo Felix, who he works with closely. 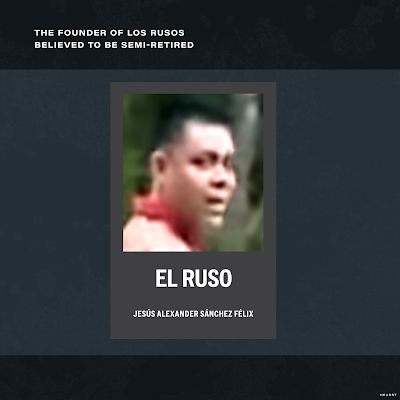 Rusos may have had a group break off from them called “Los 80s” within the last year, but little has been heard of them since their first few narco messages. 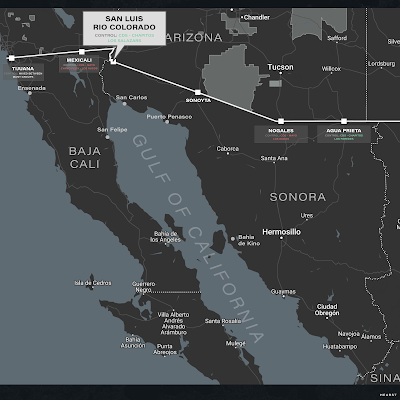 Their armed wing Gente Nueva de Altar is currently believed to be split into two sides and the group’s power appears to have diminished significantly in the last year due to multiple big arrests. Salazars also have smaller, local groups like Los Garibays and Los Memos allied under them. 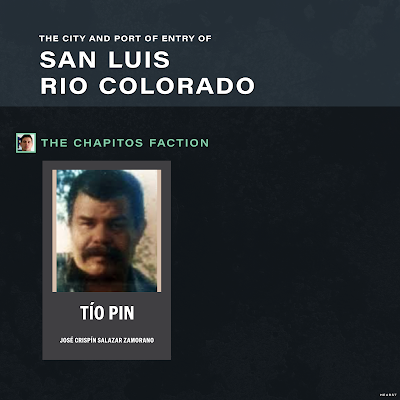 Last year there were rumors of some tension arising between Salazars and Chapitos but nothing seems to have come from it.

SLRC has been regularly contested by Los Rusos, who are fighting to take control of the city from Los Salazar. To see a collection of articles which cover Rusos fighting against Salazars, please see the bottom of this story.

The port of entry of Sonoyta remains a question mark. A year or two ago, Zeta TIjuana alleged that a Salazar lieutenant named Eduardo Molina Flores, alias “El Zabe”, was operating in Sonoyta. 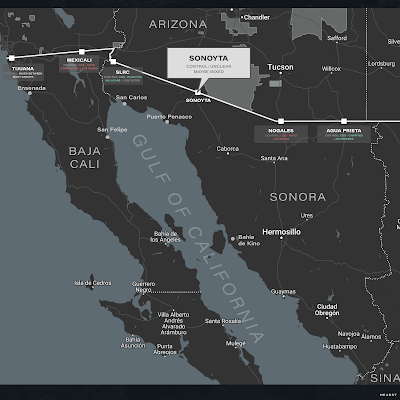 Recent rumors allege that Chavo Felix is able to move large drug shipments through the Sonoyta port of entry. It may act as a neutral location, where any CDS group (or maybe even a Caborca Cartel group?) can smuggle shipments as long as they pay a fee to the owner of the plaza.

The unloading location of Santa Clara is controlled by a CDS Chapitos cell led by Adán Quintero, alias “El 74”.

The unloading location of Puerto Penasco is believed to be controlled by Chavo Felix. 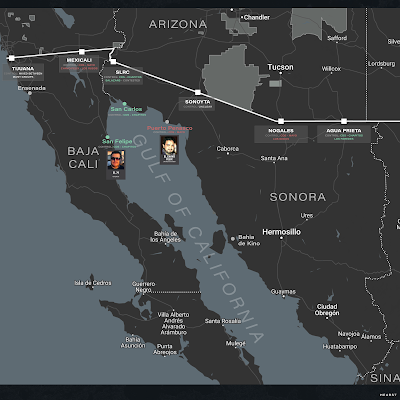 Locations along the gulf, near the city of Caborca, seems to have recently had an influx of Chapitos hitmen arriving, working under the direction of El Gabito. These hitmen seem to be primarily used for contesting areas more to the south which are controlled by the Caborca Cartel, however, it’s possible for them to engage in contesting CDS – Mayo groups to the north. 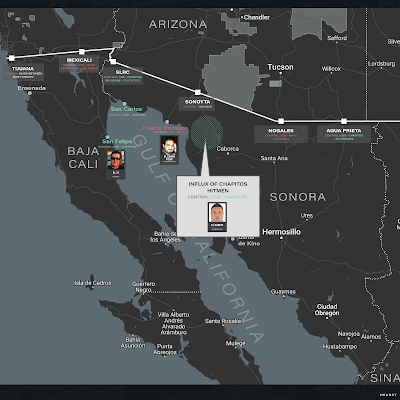