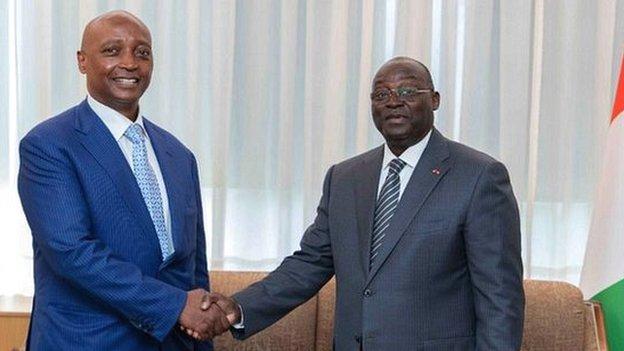 Officials from the Ivory Coast government signed a formal hosting agreement for the 2023 Africa Cup of Nations with the Confederation of African Football (Caf) on Friday.

The signing is significant as it all but ensures that the next finals, which will actually take place in 2024, will be held in the West African nation.

In recent years, the host country for Nations Cups has moved around at relatively short notice, with Cameroon having lost the 2019 finals ahead of belatedly staging them earlier this year.

Along with other dignitaries, Caf president Patrice Motsepe was in Abidjan to meet Ivorian government officials, including vice-president Tiemoko Meyliet Kone and sports minister Paulin Claude Dahno, who signed the agreement.

Six stadia in five cities – Abidjan, Bouake, Korhogo, San-Pedro and the capital Yamoussoukro – will host the 24-team finals, which will be held in January and February 2024.

The Stade Olympique d’Ebimpe, a 60,000-capacity stadium in Abidjan, is set to host the opening game and final, while the 45,000-capacity Felix Houphouet Boigny Stadium in the city is also being renovated.

The Organizing Committee of the African Cup of Nations 2023 said it was satisfied with the progress of work on the Ebimpe stadium at the end of a technical visit last month.

Meanwhile, the country’s National Office of Infrastructure stated that stadiums in Bouake and Yamoussoukro, which will hold 40,000 and 20,000 respectively, are virtually complete.

However, the BBC’s Lalla Sy in Abidjan says that concerns have been raised about whether there will be enough hotel rooms available to accommodate competing teams, dignitaries and officials and travelling supporters.

Siandou Fofana, Ivory Coast’s Minister of Tourism, has called for hotels to be upgraded to international standards.

The 2023 Nations Cup was originally scheduled for June and July next year, but was moved to avoid the rainy season in Ivory Coast.

Qualifiers for the finals are under way but proposed fixtures in September were rescheduled to allow Africa’s five participants in the World Cup to arrange friendly matches.

Group fixtures will resume in the next international break in March, with the final two rounds of fixtures being held next September.

Ivory Coast are playing in Group H despite already being assured of a place at the tournament.

Meanwhile, Caf is also looking for new hosts of the 2025 Nations Cup after stripping Guinea of hosting rights last month because of a lack of suitably advancing infrastructure and facilities.

The continent’s governing body set Friday as a deadline for countries to declare interest in staging the tournament and, after receiving documents and touring bidding countries, is due to announce the successful country or co-hosts on 10 February.

A display of faith

Friday’s signing is significant as it shows the faith that Caf has in Ivory Coast to successfully host the 24-team Nations Cup in early 2024.

Shortly after taking charge as Caf president in early 2021, Patrice Motsepe grew alarmed by the lack of leverage he had in regard to hurrying up Cameroonian preparations for this year’s Nations Cup, given the contract had already been signed prior to his arrival.

In February, he said the signing of such a legal document between host nation and Caf should be delayed until a point whereby the African football body no longer needed the threat of removing the tournament from a host nation in order to effect various requests.

Motsepe’s successful trip to Abidjan should not be underestimated in terms of its importance in stressing that Ivory Coast is fit to host, especially coming after the 2025 finals were removed from Guinea last month owing to Caf’s concerns over the country’s readiness.