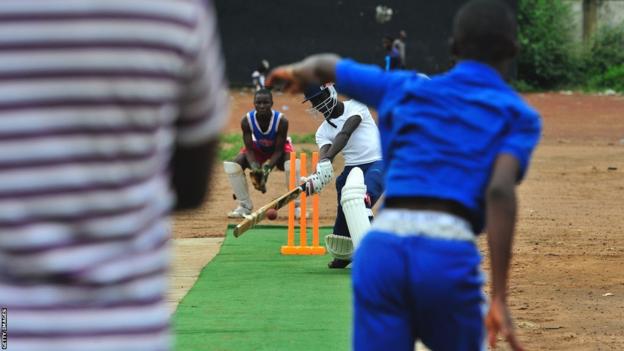 Africa must prevent some of the continent’s children from wielding AK-47 guns and “let them hold a cricket bat” instead, says the chief executive of the Africa Cricket Association (ACA).

Cassim Suliman hopes the launch of the continent’s own Hundred competition next year can help deliver this aim.

The ACA has previously used cricket as a social tool, particularly in Uganda where it helped set up an initiativeexternal-link a decade ago to help children recovering from the brutal 20-year insurgency led by the Lord’s Resistance Army in the north of the country.

“Basically, we teach a kid about accountability, responsibility, dedication, determination, and, above all, leadership.

“We also promote prevention of HIV and AIDS, hunger and starvation – and – taking out the kids that are fighting with AK-47s in wars and let them hold a cricket bat. Bring them back to normality in sport.”

A proposed Africa-wide Hundred will be the second time the format will be used following its invention and patenting by the England and Wales Cricket Board (ECB), which has run the competition twice since 2021.

It also comes off the back of September’s inaugural T20 Africa Cup for International Cricket Council (ICC) Associate Members in Africa.

Suliman also revealed that a bigger budget T20 Africa Premier League will be launched in 2024 to run every two years, while the Hundred will be played annually with a more domestic-focused agenda in the hope that the shortest formats will unlock engagement across the continent.

Meanwhile, the ACA is also on the verge of reviving the Afro Asia Cup, which ran for two series in 2005 and 2007.

Suliman says the ACA will now speak to the ECB about the rights to stage the Hundred, which is a further expansion they had not envisaged.

“We were approached by potential sponsors to go down that route,” Suliman continued.

“I watch (the Hundred) always. It is exciting, it’s great fun and to have that introduced into Africa will be good for spectator viewership. We have a sponsor that is very interested. They were also quite interested in the T20 Africa Cup – it opened up a lot of avenues for us.

“We are looking at the registration of it (the Hundred) by the ECB. We’ll definitely write to them, engage with them and tell them to look [at it] as part of cricket developing in what they call a third-world country and see how it goes from there.

“I’m sure they’ll be very accommodating. If not, we’ll just change the format.

“Further on, we want to launch the Africa Premier League, like the IPL. You can get a sponsor, an investor, very quickly – no problem. We are busy working with investors.”

As well as the national level plans for an Afro Asia Cup, the ACA launched the inaugural T20 Africa Cup in September in South Africa.

Uganda beat Senegal in the final, with Suliman reporting tournament viewing figures, which are still to be finalised with the latter stages, of 52 million after it was broadcast to 168 countries.

Qualifying was open to every African country up to ICC Associate Member level, although Namibia missed out as the Eagles had already agreed to other commitments.

“The potential is there and we don’t want to lose the moment,” Suliman continued. “The Africa Cup is going to carry on, it’s not going to die off as a one-off thing.

Zimbabwe coach Dave Houghton is keen for his side and South Africa to be included in an expanded T20 Africa Cup, and Namibia’s former South Africa all-rounder David Wiese echoes the sentiment that more options are needed on the continent.

“(ACA) is putting in a lot of funding and effort to grow the game and it was nice for us to play against teams like Uganda, Nigeria and Zimbabwe, who have played top tier for a while now.

“But it would also be great to have something like the European League. If there could be an African league or cup, that would be awesome to see because I do feel like there is a lot of talent out there.

“Uganda, Tanzania, Botswana, there’s a lot of development going on in these countries, but I still feel a lot more can happen. I didn’t know what to expect with associate cricket but I realised quickly there’s a lot of talented players. It’s just the opportunity that’s lacking.”

Wiese believes the Afro Asia Cup, which saw select XIs from both continents play One-Day Internationals and T20s, could benefit the Eagles.

“If a couple of Namibian guys can be included, we could close the gap [to cricket’s top international sides] quite quickly,” the 37-year old said.

“Namibia will only get better if they play against better opposition, so that means we’ve got to play against Test nations. Unfortunately, for associates, that [option] is just not there.

“I’d also love to see these (domestic) T20 tournaments enforce that they have to have an associate player in the squad, just to grow the game.”

Wiese, who made his debut for South Africa in 2015 but switched to Namibia in time for the 2021 World Cup, believes with the rise of the shortest forms of the game and some unified future tour planning, the time is right to raise the standard of African cricket.

“They got some quality T20 players, developed their skills and kicked on into different formats – that’s the way to go.

“The only challenge is, and it’s getting a little bit deeper, but you need funding for these things. That funding comes from having ODI status and not necessarily T20 World Cups. So it is a little bit of a catch-22 situation.

“But if the ICC can look at a different model and get a couple more associate teams involved in playing triangular series – for example, let Namibia piggyback on a South African series playing at home – that could be massive.

“Again, it all depends on the ICC and where they see the game moving in the next couple of years but once we start playing better teams, we can inspire younger generations of Africans to come through and then it can be a snowball effect.”

If so, the ACA might be happy that the continent’s youngsters have different targets in very different sights.