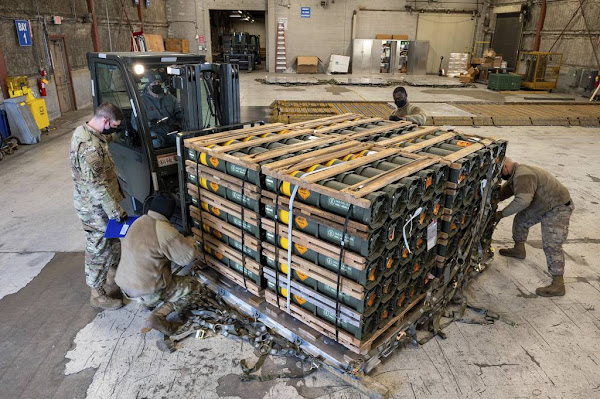 In this image provided by the U.S. Air Force, Airmen and civilians from the 436th Aerial Port Squadron palletize ammunition, weapons and other equipment bound for Ukraine during a foreign military sales mission at Dover Air Force Base, Del., on Jan. 21, 2022. (Mauricio Campino/U.S. Air Force via AP)

WNU editor: A must read …. US aid to Ukraine puts pressure on Pentagon’s arms stockpile (AP).

Here are the key points in this AP report …. …. U.S. defense production lines are not scaled to supply a major land war, and some, like for the Stinger, were previously shut down.

That’s putting pressure on U.S. reserves and has officials asking whether U.S. weapons stockpiles are big enough. Would the U.S. be ready to respond to a major conflict today, for example if China invaded Taiwan?