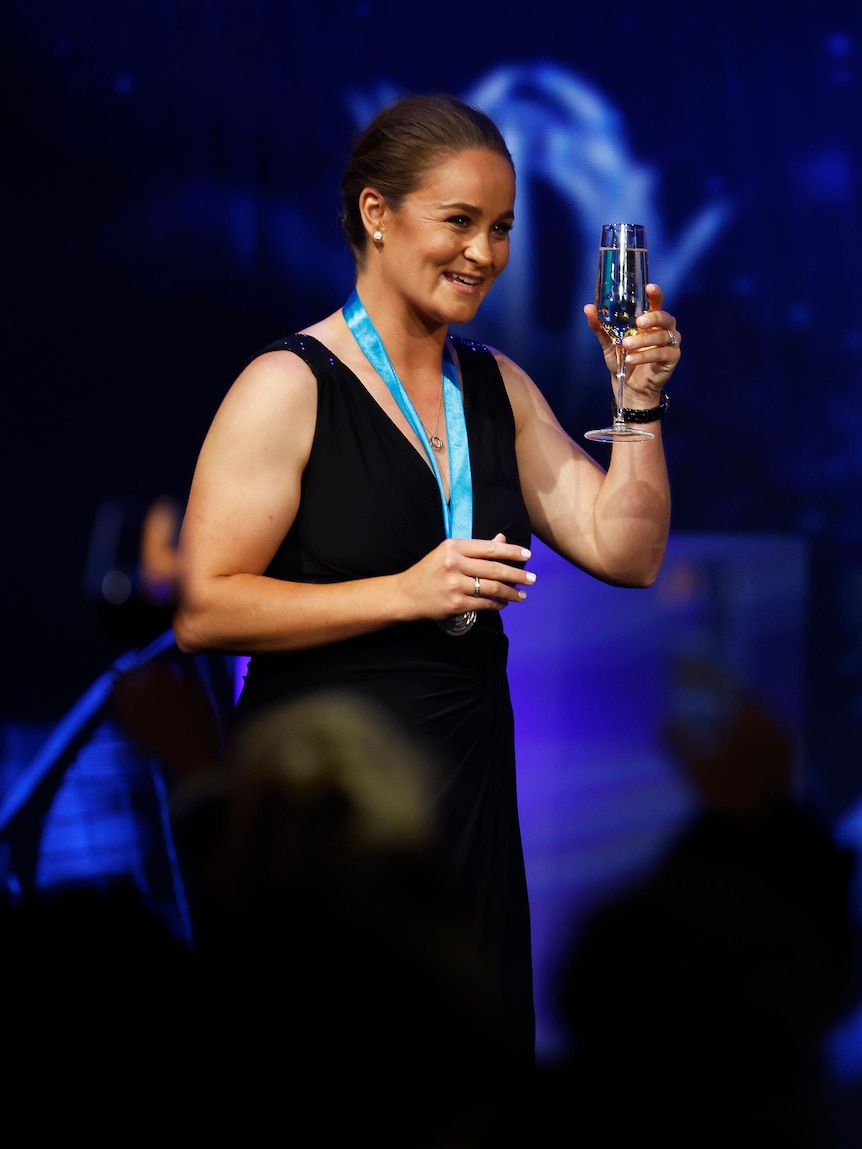 Ash Barty has hailed her record fifth consecutive Newcombe Medal as the ideal exclamation mark on her decorated tennis career.

Barty broke the Australian Open’s 44-year local title drought, after reigning in Adelaide to complete an undefeated summer, and was crowned Australian tennis’s player of 2022, despite her shock retirement in March.

“I stand here very proudly knowing that I absolutely fulfilled every ounce that I could to this to this beautiful sport and it brought me so much more than I could have ever dreamed,” Barty said.

The 26-year-old relished receiving the award in front of her family at the Australian Tennis Awards ceremony in Melbourne on Monday.

“It’s obviously an amazing way to cap off what has been an incredible journey,” Barty told reporters.

“The journey of a lifetime, the journey of me chasing after my dreams and exploring what was possible out in the world.”

The former world number one’s brilliant summer culminated with her victory over American Danielle Collins in the Melbourne Park final to complete a rare seven-match grand slam campaign without dropping a set.

She also claimed the Adelaide International singles title and combined with Storm Hunter (nee Sanders) to sweep the doubles trophy.

The 26-year-old has twice shared the honour but has now won her third outright medal.

Established in 2005, the foundation’s mission is to improve health and educational outcomes for young Indigenous people, using tennis as a vehicle.

“I just wanted to say how proud I am to be here tonight,” Goolagong Cawley said.

“And getting this award was a real surprise, I must admit, and from someone who I just absolutely adore.”

It came 11 months after Goolagong Cawley surprised Barty by presenting her with the Daphne Akhurst Memorial Cup for her Australian Open triumph.

Barty had advance notice of her mentor’s latest honour award but had good reason to keep it quiet.

“I was privileged and honoured and humbled to be asked to present it,” Barty told reporters.

“But it was a genuine surprise for her, so it was great.

“I knew how excited people would be for Evonne, because not often does she get recognised enough for the amount of work that she does.

“I know that we all appreciate it but sometimes it’s nice just to get that little bit more of an appreciation from the greater public and knowing that she’s had such a positive impact.”

Goolagong Cawley, a Wiradjuri woman, was among those who offered Barty support during her well-publicised break from tennis after the 2014 US Open.

Ngarigo woman Barty later paid a poignant tribute to the tennis legend via the dress she wore throughout her triumphant 2021 Wimbledon campaign.

And while Barty was winning Australia’s top tennis award, her replacement as world number one snapped up the WTA Player of the Year gong.

Iga Świątek rose to number one in the rankings in April after Barty’s sudden retirement.

The 21-year-old Pole then remained at the summit for the rest of 2022 thanks in part to two grand slam title triumphs at the French Open and US Open.

Świątek, the WTA Newcomer of the Year only two years ago, led the tour with 67 match wins and eight titles.