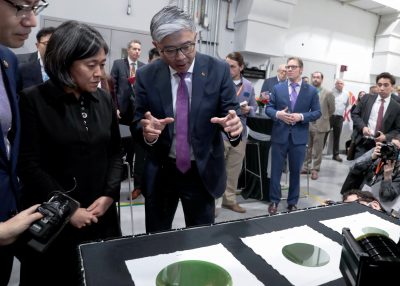 The end of 2022 left no doubt that the Biden administration in Washington had joined its predecessor on the mission to trash the rules-based international trading system, of which the United States had been the architect-in-chief in the aftermath of the Second World War. In December, US Trade Representative Katherine Tai thumbed her nose at the WTO rulings against the Trump administration’s steel and aluminium tariffs, which she too had gone into bat for.

And Biden’s team introduced the CHIPS and Science Act that sought to limit Chinese participation in the complex international semiconductor chip trade and production networks. Gone is any pretence of not forcing countries to choose — if US allies remain in the semiconductor business with China, they’ll be hit by sanctions. This is sold as security policy, but with some US companies given a temporary licence to continue to do business in China it looks very much like crude protectionist industrial policy.

In case there was any doubt, the Biden administration then introduced the misnamed Inflation Reduction Act which gave a massive boost to the subsidisation of electric vehicle manufacturing in the United States with large scale buy-in to industrial policy — exactly the issue it has been accusing the Chinese of — and retreat from open trade.

This is a significant U-turn in US economic policy and a major blow to the rules based economic order, of which the United States had historically been the primary defender. It’s a development of systemic importance because, however challenged its economic and social infrastructure, the United States is still the largest economy in the world and the world’s second largest trader. It’s much less important than it used to be in the world economy and global trade, but it’s still the world’s superpower and its innovation and moral authority mean that countries still look to Washington to lead.

From architect-in-chief to enforcer-in-chief, the United States has become spoiler-in-chief of the international trade regime.

How did this come about? And what should the rest of the world do, especially the heavily trade dependent economies in Asia whose economic and political security are so deeply tied to the effectiveness of a rules-based multilateral trading system?

It did not come about quickly, although Mr Trump undoubtedly accelerated the policy shift decisively by his embrace of populist protection against foreigners and foreign goods as a winning political gambit. Absent a national contract that valued social protection or policy strategies and institutional arrangements that cushioned and compensated for the impact of economic and social change on those at the frontline or caught in the backwash of it, Trump captured a polity that was fecund with discontent.

As William Reinsch argues in this week’s lead article, the change in US trade policy is due in part to ‘the belief of many in the Biden administration that traditional free trade agreements have benefitted large corporations and their executives at the expense of workers’. If that’s true, there are more efficient ways of rectifying the inequity than by cutting off the benefits from trade. The Biden administration’s trade policy for the middle class is focused on distributing the gains from trade but without a trade policy that creates them.

What is principally a problem of domestic policy mismanagement nonetheless has high stakes geopolitical dimensions. China is now cast as America’s — and by extension its allies’ — dominant economic and security threat. Economic decoupling from China is justified in terms of national security strategy. The COVID pandemic has fed irrational fear of vulnerabilities through exposure to international trade. And Russia’s invasion of Ukraine has deepened anxieties about the security implications of trade dependence.

Nationally, Mr Biden aims at a number of disparate targets at once: ring-fencing production that is seen as important in national security terms (such as high-quality semi-conductors); boosting national production of leading high value goods like electric vehicles; protecting jobs in industries that have political power like steel; and lowering income inequality.

Internationally he wants to make the United States more self-sufficient with more secure international supply chains in critical areas; create regional and global alliances to achieve that; and at the same time, deal with the climate change issue. But his administration appears to have only a muddled idea of the implications of the interventions in one area of this policy mix for the ability to achieve the desired outcome in others.

There is one thing about which the rest of the world can be absolutely sure. There is no quick fix to sorting out the dysfunction in US national policies now infecting the good conduct of national economic policy. The previously unthinkable reality is that the United States has given itself a red card in the conduct of sound international economic diplomacy and will likely be out of the game for some years to come. It will take a political generation or two to resolve the pickle that America has got itself into.

That is now the starting point for the conduct of international economic policy in Asia.

Asian countries and others in Europe and elsewhere (including US allies) — most of the rest of the world — with a deep strategic interest in an open, rules-based multilateral trading system must defend that system from the United States while working to upgrade the rules, step by step in regional and plurilateral agreements. That’s no easy task and will require political courage as well as deft diplomacy, particularly in dealings with the United States itself.

Beijing’s actions will need to change to match its rhetoric, but it’s clear that China, the world’s largest trader, has a stake in the existing rules-based system. The United States needs to be engaged in the effort in a way that avoids the American inclination to isolate China and break the world up into blocs.

The hope, to paraphrase Winston Churchill, is that the United States, as is its wont, will make the right call after trying everything else.