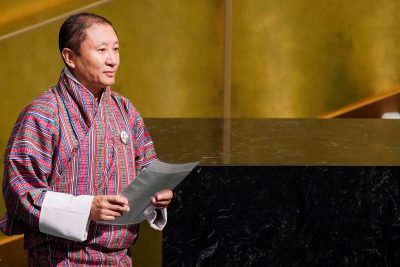 Throughout its history, Bhutan has often found itself caught between various imperial forces. It has consistently navigated a fraught geopolitical environment, and it has survived and flourished as the most peaceful nation in South Asia. But Bhutan now faces new challenges in a world with growing political tensions that affect trade and economic interdependence.

Bhutan finds itself ‘asymmetrically inbetween’ two large and resource-hungry neighbours — China and India — who maintain a significant trade relationship with each other in spite of their geopolitical differences. Bhutan has historically been aligned more towards India as a consequence of British imperial policy in the region. Due to the rivalry between India and China, Bhutan cannot take advantage of its location to benefit from both neighbours.

Analysis of Bhutan’s foreign relations has typically focussed on three determinants — economic factors, bilateral relations with India and threats from China. But this analysis overemphasises the mutual perceptions and perspectives of China and India, and largely overlooks Bhutan’s own foreign policy initiative.

Bhutan’s foreign-policy trajectory can also be read as projecting its own endogenous initiative in two additional and significant ways. The first is the way in which it has internationalised. Bhutan has expanded its formal diplomatic relations and joined international organisations and multilateral fora gradually and in different phases that have been driven by its national priorities and imperatives. Bhutan has developed linkages and expanded relations to reduce ‘distances’ with countries that are not geographically close but have been brought ‘close’ owing to common ground that arises from shared attributes, such as a similar size, Buddhist ethos or environmental values.

The second is the way that Bhutan’s foreign policy has been steered to avoid direct involvement in great power politics. In this, Bhutan exhibits contrastive ‘learning’ of what not to do from the example of other entities in the region such as Nepal.

Bhutan chooses not to antagonise either of its neighbours, and has a longstanding and powerful discourse of ‘friendship’ that plays an important part in its diplomatic relationship with India. The ties between Bhutan and India range from infrastructure connectivity, counter-insurgency cooperation and hydropower, to the memorialisation of historical relations between the leaders of the two countries. The Friendship Treaty between the two countries, which was renegotiated in 2007, removed an imperial-era clause about seeking guidance from India. This was a significant step forward in recognising Bhutan’s autonomy in conducting its external affairs.

Bhutan has also committed to the ‘one China’ policy and has not adopted any stances likely to provoke China. An important aspect of Bhutan’s diplomacy is the careful use of silence to de-escalate crises, as was the case during the Doklam crisis of 2017. Avoiding aggressive public statements that incite nationalist sentiment and polarise domestic politics enables Bhutan to maintain good relations with both of its neighbours. Bhutan often points out that it is a net provider of security in a region that would otherwise see greater escalation of hostilities.

Bhutan has limited fully formal diplomatic relations, but in various ways, such as through development and technological initiatives, it engages fruitfully with multiple significant states. The fast-growing Bhutanese diaspora in Australia, coinciding with the restructuring of civil service bureaucracy in Bhutan, is a development that will be of salience in the coming years. Beyond India–China, Bhutan has pursued a variety of strategies in building relations at a paradiplomatic level, and also with other small states, whether in the neighbourhood (like Bangladesh) or further away.

The country has ‘de-hyphenated’ its foreign relations in engaging with antagonistically positioned countries, seeking complementarities and finding points of mutual gain, making an effective use of multilateral fora. As Bhutan’s foreign policy objectives rather closely match its behaviour on the international stage, it has a credibility that has helped it be a norm entrepreneur and place issues such as environmental preservation or happiness enhancement on the global agenda.

Bhutanese foreign policy focusses on sovereignty and security, including human and environmental security. Although the fear of Chinese encroachment into Bhutanese territory is generally seen as the only traditional security threat it faces, climate change and environmental damage also pose a significant threat to Bhutan. In the past, another threat it faced was from anti-Indian insurgents who sheltered in its southern forests and were expelled in an operation led by the fourth King himself.

In recent years, historic moves towards settling the Bhutan–China border issue were made, with a Memorandum of Understanding for a three-step roadmap to expedite boundary talks signed in 2021. This is an imperative goal for Bhutan. Its border with India was only finalised in 2006, and it has shrunk in size over centuries due to the encroachments of multiple and sometimes overlapping empires. Although border talks with China began in 1984, they were not concluded because areas strategic for India — such as the Siliguri corridor — were involved.

Bhutan has faced continued uncertainty and risk because of its unresolved border issues. Bhutan’s actions to resolve these, such as furthering a border resolution with China, are in its sovereign interest and should not be perceived as anti-India.

The best way to address the repeated encroachments and potential hostile flareups would be for regionally and internationally significant actors to put their weight behind a resolution of Bhutan’s border negotiations with China. If this issue is settled, Bhutan will have a stable context in which it can further its ambition of being a bridge of harmony between India and China.