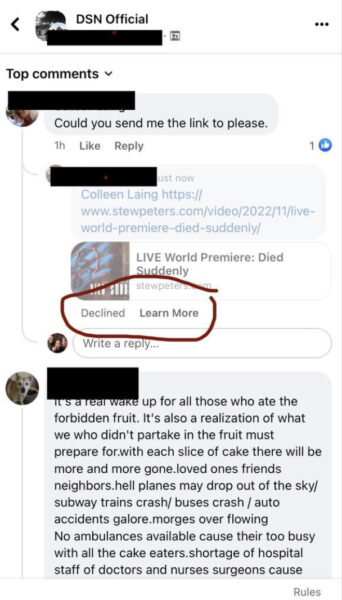 Big Tech and their allies in corporate media are scrambling to censor Stew Peters’ earth-shattering new documentary film, “Died Suddenly,” after it amassed millions of views within hours of its release and broke through the left-wing algorithms to trend on social platforms.

Censors on Facebook have already booted “Died Suddenly” from the social media platform after millions upon millions of viewers streamed the film within hours of its release.

“Died Suddenly” from the Stew Peters Network, another hit film directed and produced by award-winning filmmakers Matthew Miller Skow and Nicholas Stumphauzer, who also directed “Watch the Water” and “These Little Ones,” promises to upend the paradigm through which the last three years will ultimately be viewed.

Apparently, the film has gone so viral and has so disrupted the Big Pharma narrative, that Facebook’s censors and anti-speech algorithms are working overtime, to stop users from even posting the film in the first place.

In a screenshot obtained by National File, when a Facebook user tried to post a link to the new “Died Suddenly” film, they were censored as soon as they hit the “post” button.

Google, long known for its manipulation of web search results in favor of the political left and corporate-government power structure, appears to have de-listed the “Died Suddenly” film, or at least pushed the actual link to the movie to the very end of their search results.

Currently, the Big Tech search engine is pushing articles from Forbes and other corporate media publications to the top of its “Died Suddenly” results, in an attempt to dispel the documentary, which cites hard medical and scientific facts before making its claims.

While Google’s Forbes link says that “Died Suddenly” “pushes unfounded” claims about the COVID jab, other search results appearing on the very same page prove the entire point of the new film.

Right next to stories from Forbes and The Guardian are news stories profiling people who’ve “died suddenly,” in the wake of the COVID jab roll-out.

All over the world, the phrase “died suddenly” has become commonplace in the obituary sections of newspapers and in web posts made to memorialize jab victims – providing the tragic inspiration for the naming of Peters’ new film.

Produced by Stew Peters, along with hard-hitting patriots Lauren Witzke, and Edward Szall, “Died Suddenly” blows the lid off of the global depopulation scheme at the heart of the death jab roll-out.