Can Japan, moving closer to Israel, preserve its neutral reputation in the Middle East peace process? 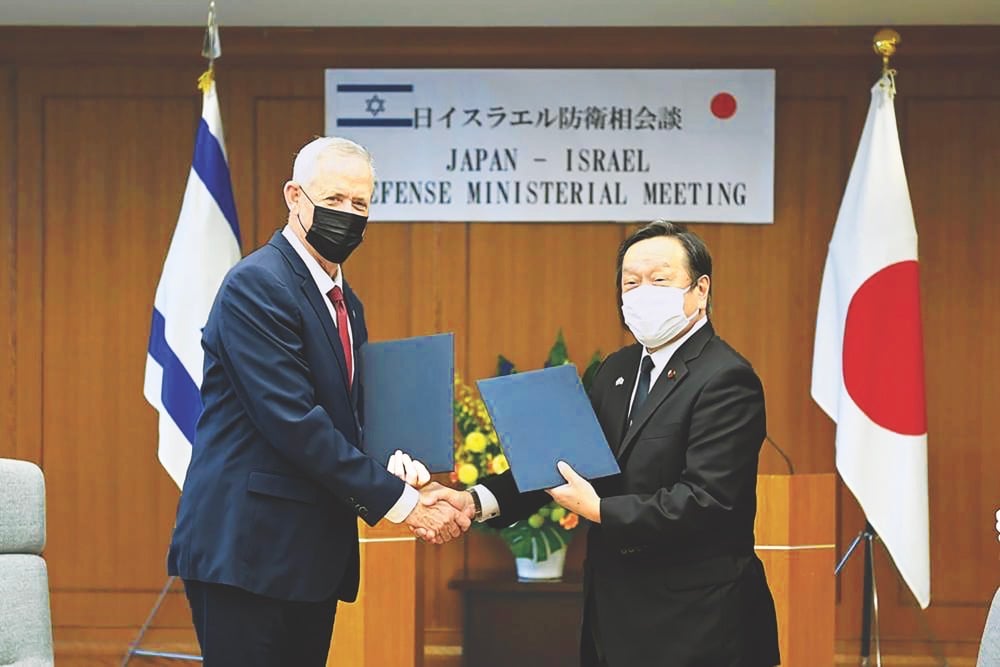 TOKYO: Japan’s reputation as a neutral actor in the Middle East peace process continues to suffer as it tries to forge a close defense relationship with Israel. Diplomats say Tokyo is taking a visibly softer stance with regard to aggressive Israeli policies and the annexation of Arab lands by force.

The perceived policy shift by the key Asian economic power is understandably causing concern among not only Palestinians, but also people across the entire Arab world. Veteran Likud politician Benjamin Netanyahu has less than two days to tell President Isaac Herzog he is ready to put together Israel’s 37th government.

In the new Israeli coalition government, Itamar Ben-Gvir, a far-right politician, is tipped to head a Police Ministry with expanded powers in the occupied West Bank. Ben-Gvir’s expected role as national security minister has sparked controversy in Israel itself owing to his past support for Meir Kahane, an extremist rabbi, one of whose followers carried out a terror attack in 1994 at the Ibrahimi Mosque in Hebron, killing 29 Palestinians and wounding 150 others.

Against this backdrop, Waleed Siam, the Palestinian ambassador to Japan, cautions that there are potential downsides to Tokyo’s is eagerness to boost bilateral cooperation with Israel.

“Of course, Japan is free to do whatever it wants, but such a policy only rewards the Israelis and does not discourage its hostile acts against the Palestinians,” he told Arab News Japan.

Referring to Ben-Gvir, Siam said it is shocking that “one of Israel’s (expected) Cabinet ministers belongs to the infamous Kahane organization, which killed Palestinians who were praying in the Ibrahimi Mosque and in surrounding areas in Hebron.”

He told Arab News Japan: “We heard Netanyahu say ‘no’ (to establishing a Palestinian state) during his first and second terms as prime minister, and now it is his third term heading an Israeli government, and he is still saying ‘no.’

“The Palestinian leadership has long agreed to the two-state solution with Israel, thus showing great willingness over the years to compromise.

“However, Israel’s expansion of illegal settlements and continued annexation of Palestinian land means that we, the Palestinians, are living under an apartheid military regime that has been systematically oppressing, brutalizing and discriminating against us.”

Siam said that by allowing Jewish settlers to inflict violence on Palestinians, evicting Palestinians and demolishing their houses, as well as annexing Palestinian neighborhoods, Israel has demonstrated that it “does not respect international law or UN resolutions.”

As long as the “world rewards Israel, cooperates with Israel and opens its markets to Israel, Israelis will have no incentive to do anything about the two-state solution,” Siam added. “Based on that, I believe the international community must be considered responsible for enabling Israel’s daily illegal acts against Palestinians.”

• Japan has long been perceived as an impartial broker of a future deal between Israel and Palestine.

• A joint Arab News Japan-YouGov survey in 2019 found that 50% of Arabs view Japan as the most credible potential candidate to act as a Middle East peace mediator.

In Siam’s opinion, the fault lies with the international community for failing to enforce relevant UN resolutions. “We hope and appeal, in the strongest possible terms, that they reflect on appropriate measures to bring the Israelis into compliance,” he told Arab News.

Mohammad Shtayyeh, the Palestinian prime minister, recently played down the significance of the election loss seven weeks ago of Israel’s big-tent government to Netanyahu’s right-religious bloc.

He said that gains by far-right Israeli religious parties in the national election were “a natural result of the growing manifestations of extremism and racism in Israeli society.”

“Generally speaking, under international law, territory occupied by force and unilaterally annexed is not permitted. From this perspective, Japan has maintained its position not to recognize the Israeli annexation of the Golan Heights. That’s been a consistent position of Japan. So, concerning the Israeli-Palestine conflict, it should be a two-state solution that the parties involved (should aim to achieve) through negotiations.”

Incidentally, Japan established the “Corridor for Peace and Prosperity” initiative, aimed at facilitating the economic self-reliance of Palestine through regional cooperation with Japan, Israel and Jordan.

As of June 2022, Japan’s assistance amounted to $2.21 billion since 1993, including assistance to Palestine refugees and aid in response to the situation in the Gaza Strip.

Japan has separately provided $23 million in humanitarian support and reconstruction assistance to Gaza.

While the basic elements of the Japanese approach to the Middle East peace process may not have changed, there are recent signs of an increasing admiration for Israel in Tokyo driven by self-interest.

“Israel excels in developing advanced technology and innovation, and (it) holds importance for the Japanese economy and the stability of the Middle East,” the Japanese Foreign Ministry in Tokyo said in its 2022 foreign policy report.

It added: “Israel attracted worldwide attention in 2021 as a leading country in COVID-19 vaccinations. The country became the first in the world to begin offering a third dose of vaccinations to the general public.”

The foreign ministers of Japan and Israel kicked off the Tohoku-Israel Startup Global Challenge Program in July 2021, while Benny Gantz, the former Israeli defense minister, held a meeting with his Japanese counterpart earlier this year and agreed on new military and security cooperation.

Observers say that by supporting the Abraham Accords, which are bringing some Arab states closer to Israel, the Japanese government is portraying itself as a guarantor of the region’s stability and beyond. But not all experts agree on this point.

“The Japanese government is not considering supporting the current trend (the Abraham accords) because it would jeopardize its impartiality,” a Japanese expert in Middle East issues told Arab News Japan.

“However, one school of opinion does hold that such an approach is in line with Tokyo’s aim of achieving reconciliation between Arabs and Israelis.”

According to another expert on Japan-Israeli relations, Japan is moving closer to Israel’s side as security and self-defense grows in importance for Tokyo.

“Palestinians can’t help Japan with its security requirements but Israel can,” he told Arab News Japan.

A reception hosted by the Israeli Embassy in Tokyo to celebrate the 70th anniversary of bilateral ties “was full of staff from Japan’s Ministry of Defense,” he added. 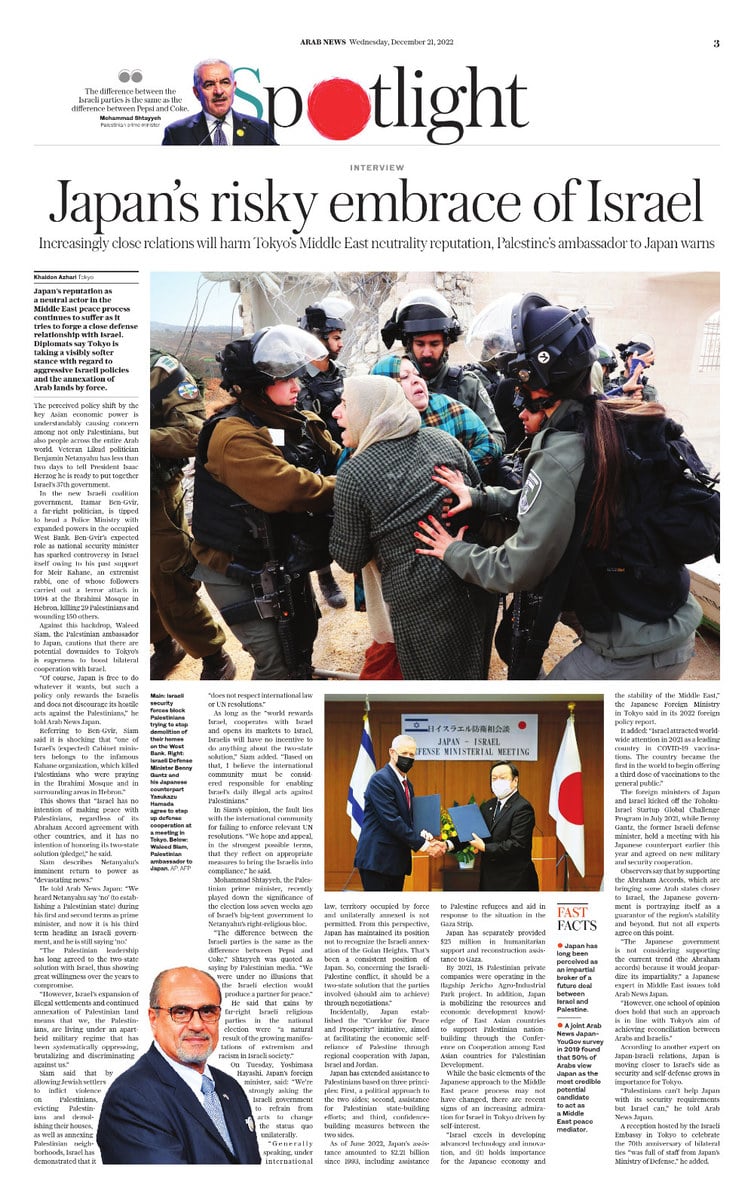