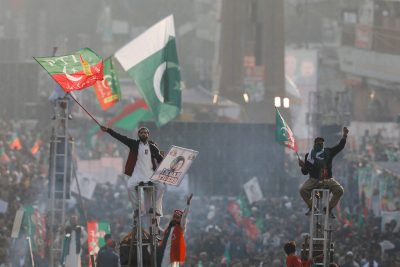 The infelicitous phrase ‘international basket case’ might better apply to Pakistan today than when it was applied to Bangladesh in the 1970s — Pakistan’s former eastern half. Bangladesh has surpassed Pakistan economically and in quality of life. There is even talk of Bangladesh graduating to upper middle-income country status. Quite a reversal of fortune as no one talks about Pakistan that way.

Pakistani economists lament that Bangladesh overtook Pakistan in just a couple of decades. Pakistan’s remittance earnings are greater than its stagnating export earnings, and both combined can’t pay for its imports. The Pakistani economy is in a precarious state and some are calling for Pakistan to suspend payment on its ever-increasing foreign debt, the largest portion held by China at 30 per cent.

An increase in Pakistani tax revenue is good news, but it remains to be seen if Pakistan can improve its tax to GDP ratio, which sits among the world’s lowest at 9.5 per cent. Pakistan’s budget deficit is 7.9 per cent of GDP and continues to remain dangerously high despite continual government promises to the IMF that it will put its fiscal house in order.

Successive Pakistani finance ministers have long promised to raise, even double, Pakistan’s tax-to-GDP ratio but have proven unsuccessful after facing determined opposition. Entire sectors of the Pakistani economy — agriculture, retail and real-estate development — are essentially untaxed. For example, OECD countries collect about 2 per cent of GDP in property taxes versus 0.6 per cent in emerging market economies but Pakistan’s figure is a mere 0.1 per cent. By some estimates, 50 per cent of Pakistan’s work force is in the untaxed economy, accounting for about 35 per cent of GDP.

As long as the unholy economic trinity of real estate development, retail business and the sugarcane barons remain outside the tax net, Pakistan will not be able to generate enough fiscal revenue to pay its bills, much less improve its socio-economic welfare indicators.

Pakistan has serious long-term structural economic problems, and the costs for this year’s devastating floods will be in the tens of billions of dollars. Suffering from mammoth floods every 10–12 years, which are becoming worse and more frequent due to climate change, Pakistan is one of the world’s most water-stressed countries.

Rebuilding the destroyed infrastructure will be impossible for a country that is already heavily indebted, desperate for an IMF bailout and begging for financial assistance from the world community. Inflation was high even before the floods hit and is now about 25 per cent and climbing.

Miftah Ismail, who negotiated the US$1.17 billion temporary IMF bailout, was Pakistan’s fourth finance minister in five years. Ismail resigned and was replaced by ex-finance minister Ishaq Dar. Dar has ruled out a loan default, although he has asked for US$27 billion in bilateral-debt rescheduling, presumably to ensure the repayment of sukuk (Islamic bonds) due in December.

Dar is generally held responsible for Pakistan’s economic woes during the Pakistan Muslim League’s (PML) last ruling stint. He is regarded as a crony of the Sharif brothers — Nawaz who served thrice as prime minister, and current prime minister Shahbaz. Dar fled the country rather than face corruption charges but had his arrest warrants quashed to enable his return. There are also serious corruption charges against both Sharif brothers.

The Pakistan People’s Party is the PML’s long-time opponent but is currently allied with it against ousted prime minister Imran Khan’s Pakistan Tehrik-e-Istiqlal. It also has a serious corruption problem. The former Pakistan president and current party leader Asif Ali Zardari was known as Mr 10 per cent.

Pakistan is a corrupt rentier state. The elite depend upon extracting rents, whether from its geo-strategic position, massive foreign aid — loans or other assistance — or remittances from Pakistani workers toiling in the Gulf. Because it is a consumption focussed elite that does not reinvest in the Pakistani economy, there is precious little economic development to show for all this inflow. The ability of its economy to manufacture and export high value added items — essential for sustaining growth in real worker wages and living standards — is lower than comparable countries.

Further complicating the political situation is former prime minister Imran Khan who was removed in a vote of no confidence in April 2022. Still, Khan appears to be gaining in popularity daily and is planning mass rallies to destabilise the current government and force early elections. General Bajwa, the head of Pakistan’s army, and a particular target of Imran Khan’s, has retired, but his replacement, General Asim Munir, is also likely to be in Imran’s cross-hairs. This will further exacerbate political tensions and increase the likelihood of domestic unrest.

Pakistan is a country that is unstable at the best of times. It now confronts a veritable devil’s brew of natural disaster, economic crisis and political instability.

Feisal Khan is in the Economics Department at Hobart and William Smith Colleges, New York.