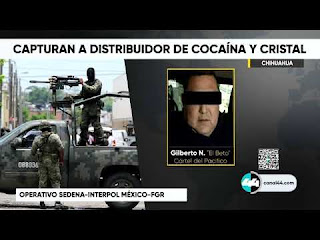 The capture of Gilberto N., nicknamed “Beto”, was announced by the Secretary of National Defense, Luis Cresencio Sandoval.

In Chihuahua, Gilberto, alias “El Beto” was arrested, who is considered to be an operator for the Pacific Cartel in the state

The Secretary of National Defense announced the capture of four relevant targets in Mexico, including an alleged operator of the Sinaloa Cartel who operated in the state of Chihuahua and sent drugs to the United States.

This was announced by the Secretary of National Defense, Luis Cresencio Sandoval, who said that among the four relevant arrests that took place in different states, in the state of Chihuahua, the capture of Gilberto N., nicknamed “Beto” was achieved, without disclosing further details.

During the press conference with President Andrés Manuel López Obrador, the head of the Mexican Army explained that the arrests were made in a period of 14 days between the months of November and December of this year and as part of the national security strategy.

Luis Cresencio Sandoval said that eight missions were carried out in the country through the deployment of 147,000 military elements, attending to public security, customs, air space surveillance, migration, disasters, eradication of crops in the country in a period of 15 days.

In Chihuahua, Gilberto, alias “El Beto”, who is considered to be the operator of the Cartel del Pacífico in the state, was arrested and was in charge of moving cocaine and methamphetamine for a drug trafficking network in the United States, according to Sedena.

At the moment there is no further information on the time or municipality where the Sedena, FGR and Interpol captured Gilberto, but they say it was on December 1.

In coordination with the CNI and the Attorney General’s Office, they arrested four people, including a financial operator of La Familia Michoacán identified as Misael “El Pollo” and another arrested in Nuevo Laredo identified as Heriberto “El Negrolo”. 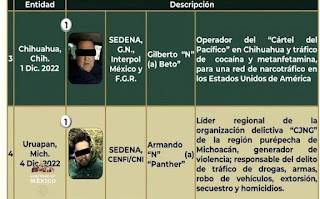 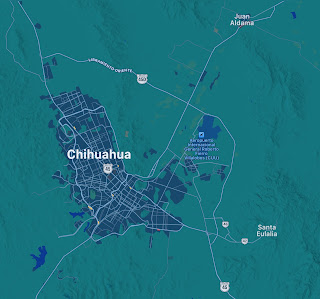