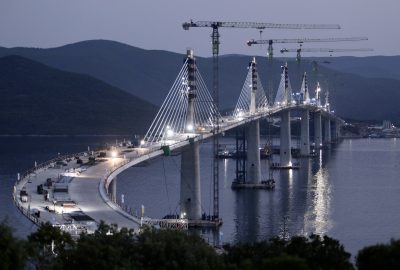 When the Peljesac Bridge in southern Croatia opened on 26 July 2022, it was the second time a Chinese construction company, the China Road and Bridge Corporation (CRBC), had built a sizable bridge in Southeast Europe. It was also the second time that Li Keqiang, China’s now-former premier, attended an opening ceremony for a Chinese-constructed bridge in Southeast Europe.

While the opening of the Pupin bridge in Belgrade featured hundreds of Chinese flags and a visit by the premier, the 2022 opening of the Peljesac bridge was quite different. During the lavish inauguration of the bridge, Li addressed the crowd via livestream with a speech extolling the friendship and cooperation between China and Croatia. Local media dismissed the talk as long and tedious. No Chinese flags were seen among the Croatian nationalist imagery.

One reason these two events were so different is the COVID-19 pandemic. China’s zero-COVID policy has made overseas trips a rarity for Chinese leaders and citizens alike.

Chinese construction sites in the region have faced staff shortages caused by COVID-19 restrictions. Even as European societies have slowly opened up, strict rules adopted by Chinese companies have separated the lives of Chinese employees from their local colleagues — even more than before.

Local Chinese managers of Gorenje, a Slovenian electronics manufacturer acquired by Hisense, were reprimanded by their superiors for COVID-19 outbreaks in the company. Chinese employees were advised not to socialise with their Slovenian counterparts to prevent infections. It’s hard to build ‘people-to-people’ links, as Chinese Communist Party foreign policy calls for, when the barriers to interaction only get higher.

While China and its state-owned enterprises (SOEs) have not left Southeast Europe, a period of naive optimism and excitement is drawing to a close. Many headlining projects have stalled. It’s not just old projects fading out — few new projects have been announced in recent years. Partly, this reflects shifts away from coal, which once made up most Chinese-funded projects in Southeast Europe. Even so, few ‘green’ projects involving China have been announced in the region, leaving an infrastructural gap that may not be filled with Chinese loans or contractors.

COVID-19 is not the only barrier standing between China and Southeast Europe. The European Union’s (EU) new guidelines on excluding ‘third country’ (Chinese) bidders from public tenders were first applied in Southeast Europe. In 2020, the Slovenian procurement commission excluded all bids by Chinese SOEs to build a new US$1.2 billion rail line.

China is excluded because it is not party to the World Trade Organization’s Agreement on Government Procurement. The European Commission seems to be flexing its regulatory muscle with new guidelines for member states.

Such rules are getting stricter too. In March 2022, the European Parliament and national governments agreed on an International Procurement Instrument after a decade of negotiations. The instrument demands market access reciprocity and makes it possible for member states to consider the social, environmental or security implications of allowing a third country bidder to participate in large public tenders. The Commission specifically mentioned the Peljesac bridge as an example of the problem — while European companies seldom win public tenders in China, a Chinese SOE won a US$355 million contract almost entirely funded by the EU.

Another hotly debated measure is the ‘anti-coercion instrument’ that would allow the EU to respond to third countries that exert economic pressure on individual member states, as happened in the case of China’s sanctions on Lithuania over its relations with Taiwan.

The EU’s hawkishness on China affects the ‘waiting room’ of the Balkans as well. Montenegro’s humiliating experience of being refused an EU bail-out for its Chinese loan troubles sent a strong message to the region, especially to bigger EU candidate countries like Serbia.

Serbia remains China’s only real friend in the region. Although distracted by Russia’s invasion of Ukraine, Serbia continues to balance between ‘the West and the rest’ in its foreign policy. But even in Serbia, China’s image has recently taken a hit. An increase in local protests and civil society monitoring of Chinese investments has raised the political cost of cosying up to these far-away investors.

Working conditions at the building site of a major tire factory became a national talking point in 2021. Conditions became so bad that the Serbian president and prime minister got involved to reassure the public that the government respects workers’ rights. In the country’s east, a slow-burning conflict between local environmental activists and Chinese mining giant Zijin has escalated of late. Protesters occupied a local hill in Majdanpek that is earmarked for demolition, while local journalists have investigated Zijin’s treatment of Chinese miners.

China became a player in Southeast Europe because of its SOEs and no-questions-asked loans. In return, China wanted its SOEs to work on big construction projects in the region and build up portfolios that would allow them to bid for projects in EU states — something the CRBC managed to do with the Peljesac bridge. The route to such bids appears closed for now.

Even if geopolitical tensions subside, European governments are getting serious about curtailing the social and environmental failures that plague many Chinese-funded projects. It will only get harder for China’s state-owned giants to win tenders, acquire European companies or invest in building local production plants.

China’s domestic political context also matters. As seen at the 20th party congress and with the current wave of protest, China’s leaders are firmly focused on domestic prosperity and social order. Long-term Chinese investments will remain an integral part of Southeast European societies, but China’s political influence in the region should not be taken for granted.