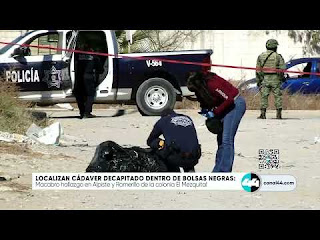 Video translation is as follows:
A man on a street in Ciudad Juarez found the body of a person. It is the decapitated corpse of a human being that was inside several bags. I’m showing you the images where exactly this happened in the last few hours in the El Mezquital neighborhood.
Apparently a citizen was driving their vehicle down a dirt road, as you an see on the screen, when he discovers the plastic bags. It turns out that it’s the body of a person. The authorities arrived to collect the evidence. It is still unclear at this time when the body was left there and who is responsible for this dramatic discovery.
As we were saying, it is the body of a decapitated person that was taken in bags and dumped in the street of the neighborhood that I am telling you about in the area of El Mezquital. The authorities have given very little information about this crime. Only that it happened at this point mentioned above. 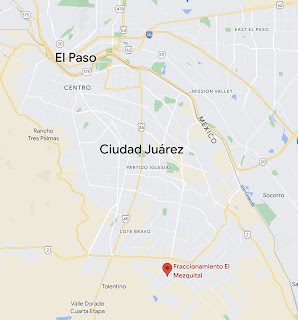