By “El Huaso” for Borderland Beat 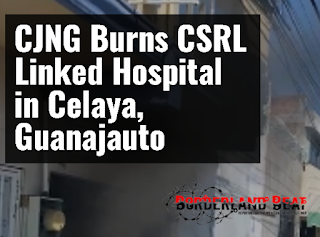 This morning in Celaya, Guanajauto, hitmen of the Cartel Jalisco Nueva Generación (CJNG) attacked and burned a hospital mentioned in leaked army documents as being affiliated with rivals the Cártel Santa Rosa de Lima (CSRL).

The Clínica San Fermín was attacked by armed gunmen who shot up the exterior, spread flame accelerant inside, and set the building on fire, according to news daily La Silla Rota. There are no reports of injuries or deaths. A video of the attack shows two narco messages were left at the crime scene, signed by the CJNG Grupo Elite, a CJNG cell that spearheads their war in Guanajuato.

The video is blurry, but the Grupo Elite’s main stock phrase “Remember that all of Guanajuato has an owner” can be seen. This motto appears in the vast majority of their messaging. In 2021, of the 57 narco messages signed by CJNG in Guanajuato, 45 (79%) had this same phrase within them, according to the 2021 Borderland Beat narco message database.

Videos show the burned building but no sensitive content.

On October 29, Mexico news site Latinus reported on the leaked documents showing photos which appear to be part of a Sedena report on organized crime affiliated businesses in the states of Guanajuato and Michoacán. The documents claim that the targeted business, the Clínica San Fermín in Celaya, is owned by the mother of  Fernando Juárez Morelos “El Panther”, a former CSRL operator. Latinus also reported that the documents reveal that the hospital was used by the CSRL to treat their wounded members without providing a paper trail.

After the capture of longtime CSRL boss José Antonio Yépez, “El Marro” in August 2020, El Panther took control of the CSRL, leading the organization until his own capture on October 8, 2021.

The Latinus article shows a photo of the hospital as well as its address.

The leaked information was part of the 8 Terabytes of Sedena documents leaked by hacker group ‘Guacamaya’, who have been releasing information since September 30, 2022. The breach, which contains millions of leaked documents, reveals information about Sedena’s capabilities, operations, and intelligence. Carlos Loret de Mola, the founder of Latinus and a harsh critic of the current administration, was the first to report on the leaked documents.

So far this year Guanajuato has recorded 2,424 homicides, about 10% of the nation’s total, according to government data. This carnage is related to the years long brutal conflict between a local organized crime group, CSRL, and the CJNG, which has made Guanajuato the most violent state in Mexico by homicide count since 2018.

Much of the violence is fueled by the fight between these two groups and their allies for control of the state’s lucrative Petroleros Mexicanos (PEMEX) pipelines and an expanding market of synthetic drug consumers.

With information from David Saucedo.