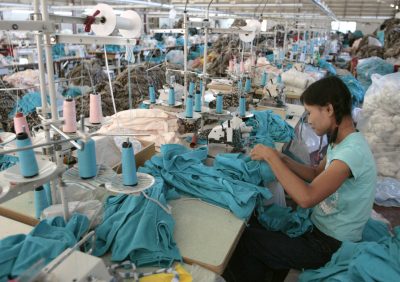 From 1 October 2022, Thailand’s daily minimum wage has increased throughout the country by 5–8 per cent. The new daily minimum wage ranges from 328 baht (US$9.45) to 354 baht (US$10.2). This has raised concerns about the effect higher wages may have on Thailand’s economic recovery as the world continues to grapple with the COVID-19 pandemic.

Minimum wage policies have long been a controversial issue among policymakers, businesses and scholars. While they guarantee minimum income for workers, they also increase the cost of employing low-wage workers, which in some cases can increase unemployment. Empirical studies on the impact of minimum wages suggest mixed results. Negative impacts on employment have been found in developed countries such as the United States, the United Kingdom and Australia.

In 2011, the newly-elected government led by Yingluck Shinawatra announced a harmonised minimum wage rate nationwide known as ‘the 300 baht (US$8.64) minimum daily wage’ scheme. This was Thailand’s largest hike in the minimum wage since the country’s first minimum wage legislation was passed in 1973. This also was the first time since 1972 that all provinces had the same minimum wage, irrespective of the cost of living and other socioeconomic characteristics.

Unlike other policies such as the universal health care system and pension, many occupations and economic activities are not covered by the minimum wage law, such as government officers, state enterprise employees, domestic workers, maritime workers and agricultural workers.

Minimum wage legislation applies regardless of age, education, nationality, race or sex but varies by location. One of the primary mandates of the minimum wage law is to protect newly-hired workers. Employers are expected to pay workers who have more than one year of experience more than the minimum wage because they accumulate skills and have higher productivity.

The minimum wage reform in 2013 increased average daily earnings, consumption expenditure per capita, income per capita and the number of paid days of employment. But poor households are less likely to reap gains from this reform due to non-compliance with minimum wage laws in the large informal sector of Thailand’s economy.

Thailand is home to about 2.6 million migrants, primarily from Laos, Cambodia and Myanmar. Migrant workers are concentrated in manufacturing, fishing, construction and domestic work sectors. These jobs are categorised as dirty, dangerous and difficult. Most migrant workers in Thailand earn wages equal to the minimum wages set by the government but the increased minimum wage may not result in a large inflow of migrants, given the slow economic recovery from the ongoing pandemic.

While an increase in the minimum age could put pressure on business costs, wages are not the only important factor for attracting more investment into Thailand. Due to large sunk costs involved in investing abroad and the need to secure parts and components elsewhere, relocation takes time and money. The COVID-19 pandemic may accelerate the process of production relocating away from China as a consequence of higher labour costs in China.

The 2022 minimum wage increase is smaller than the 2013 reform in terms of changes to the daily wage. It also does not guarantee favourable outcomes for workers, especially low-paid, low-income earners because the economic conditions are fundamentally different. In the early 2010s, Thailand’s economy grew by about 2.7 to 7 per cent per year and the unemployment rate was slightly above 0.5 per cent.

Disrupted by the COVID-19 pandemic, Thailand’s economy is expected to grow by 2.9 per cent in 2022 and 4.2 per cent in 2023. This is relatively low compared to other countries in the region including Vietnam, the Philippines and Indonesia, which are expected to grow by 5–7 per cent in 2023. Thailand’s unemployment rate in 2021 was 1.4 per cent — the highest in two decades. This has exacerbated challenges caused by its shrinking working population due to its ageing society, the large size of its informal economy and high income inequality.

The Thai economy has been hit hard by the pandemic. Low-paid, informal workers are paying a high price. In this uncertain environment, it remains unclear whether this is the right time for Thailand to increase the minimum wage given it may put more pressure on small- and medium-sized enterprises. The debate on Thailand’s minimum wage continues to rage on the road to economic recovery from the pandemic.

Wannaphong Durongkaveroj is Assistant Professor of Economics at Ramkhamhaeng University. This is an abridged version of an article originally published by the author in Asian-Pacific Economic Literature.