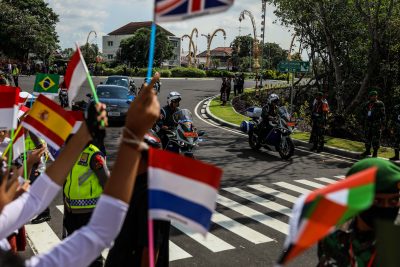 As the tectonic plates of the global balance of power are shifting, leaving a widening fault line in the international order, some countries face both the onerous challenge and unparalleled opportunity to build bridges. The countries that find themselves in this position are middle-powers.

These are countries whose unilateral actions cannot project economic or military power on a global scale, but who are large enough to exert influence. It is fortuitous that the three G20 presidencies after Indonesia fall again on middle-power countries, namely India, Brazil and South Africa.

The success of the 2022 G20 Bali Summit shows that the G20 is a process that enables middle-power countries to be fully integrated into the global system. Through the G20 process, they play a critical role in reshaping global geopolitics by brokering deals among superpowers and warring countries. They have become regional powers who are determined ‘to be at the table and not in the menu’.

Indonesia has set a high bar for the next G20 presidencies.  The troika structure of the G20 Summit — where past, current and future G20 hosts consult with one another regarding the Summit agenda to ensure continuity — provides opportunities to carry forward a sustained agenda. This ensures that the mutual concerns and interests among emerging markets and developing economies are discussed at upcoming G20 summits. There are five agenda topics that middle-power countries should use the next few G20 summits to address.

The first is to build mutually beneficial bridges across the US–China economic rivalry by using the G20 as a platform for discussions, working relations, cooperation and personal networking among leaders. This will help mitigate the US–China trade war, supply chain fragmentation and technological bifurcation — all of which will create higher inflation globally.

Global value chains of production and service networks between the United States, China and emerging markets and developing economies are key to securing stable geoeconomics amid geopolitical tension. Multilateralism is rooted in the deep belief that all countries must work together to supply each other’s demand.

Many middle-power countries also understand very well that their largest trading partners are not necessarily, and do not have to be, their closest political allies, and they will continue to use their agency to actively make sure that they are not being pushed to take sides.

The second is to call for more extraordinary actions to improve global health infrastructure, including investment in the Pandemic Fund — a joint initiative between the G20 Ministers of Health and Finance to prepare better for future pandemics.  The Indonesia G20 Presidency collected US$1.4 billion but the G20 High Level Independent Panel estimated an annual financing gap in pandemic preparedness, prevention and response of approximately US$10 billion.

India, Brazil and Indonesia were among the hardest hit by COVID-19. India and South Africa were also countries that fought for COVID-19 vaccine intellectual property rights to be waived for low- and middle-income countries during the height of the COVID-19 pandemic. Discussions and negotiations on this issue should continue at the G20.

The third is to reaffirm commitments on the climate crisis, climate justice, global climate funds and easy access to green technologies — ensuring the transition to greener energy with minimal social and economic impacts, especially for emerging markets and developing economies that are still industrialising. Stalled climate change talks between China and the United States since US House of Representatives Speaker Nancy Pelosi’s visit to Taiwan should ideally resume through the G20 platform. The first in-person meeting between Chinese President Xi Jinping and US President Joe Biden on the sidelines of the G20 Bali Summit sent a positive signal that channels of communication to manage not only economic competition and potential geopolitical conflicts but also transnational challenges including climate change are opening again.

The fourth is to push for modernising global economic governance, including repurposing international financial institutions (IFI) to finance more global public goods and accelerate governance and quota reforms of IFI. China still needs to be better represented in some IFI.

Without meaningful reforms of IFI, global economic governance will become unsustainable and may push the world further into a bipolar or multipolar structure — diminishing the role of these global economic institutions that the G20 heavily relies on to implement its initiatives. The upcoming G20 presidencies, plus China and Russia, have established the New Development Bank and explored a new reserve currency to better serve their interests.

The fifth is to continue strengthening the global financial safety net initiative to help emerging markets and developing economies deal with the spill over effects of macroeconomic policies from advanced economies. With the dollar’s dominance, any economic policy decision by the United States will continue to affect other economies globally. This has made many emerging markets and developing economies subject to capital flows and exchange rate volatility.

Perhaps the most influential priority agenda for the three upcoming G20 presidencies is to defend multilateralism and uphold the consensus-based principles of the G20 to preserve its unity and existence. Indonesia has demonstrated this by applying the inclusive principle to all members and adopting an approach of consultation and consensus-based decision making. Inclusivity means open dialogue and cooperation with all countries, a principle adopted in the ASEAN Outlook on the Indo-Pacific. It is time for the Global South to play a greater role in reviving globalisation and strengthening multilateralism, from which they have benefited since the end of the Cold War.

The next three G20 presidencies have the agency, responsibility and interest to be a neutral chair and keep international economic order multilateral, open and rules based. Let us hope that they can rise to the occasion.

Kiki Verico is Deputy Director of the LPEM FEB University of Indonesia, Jakarta.