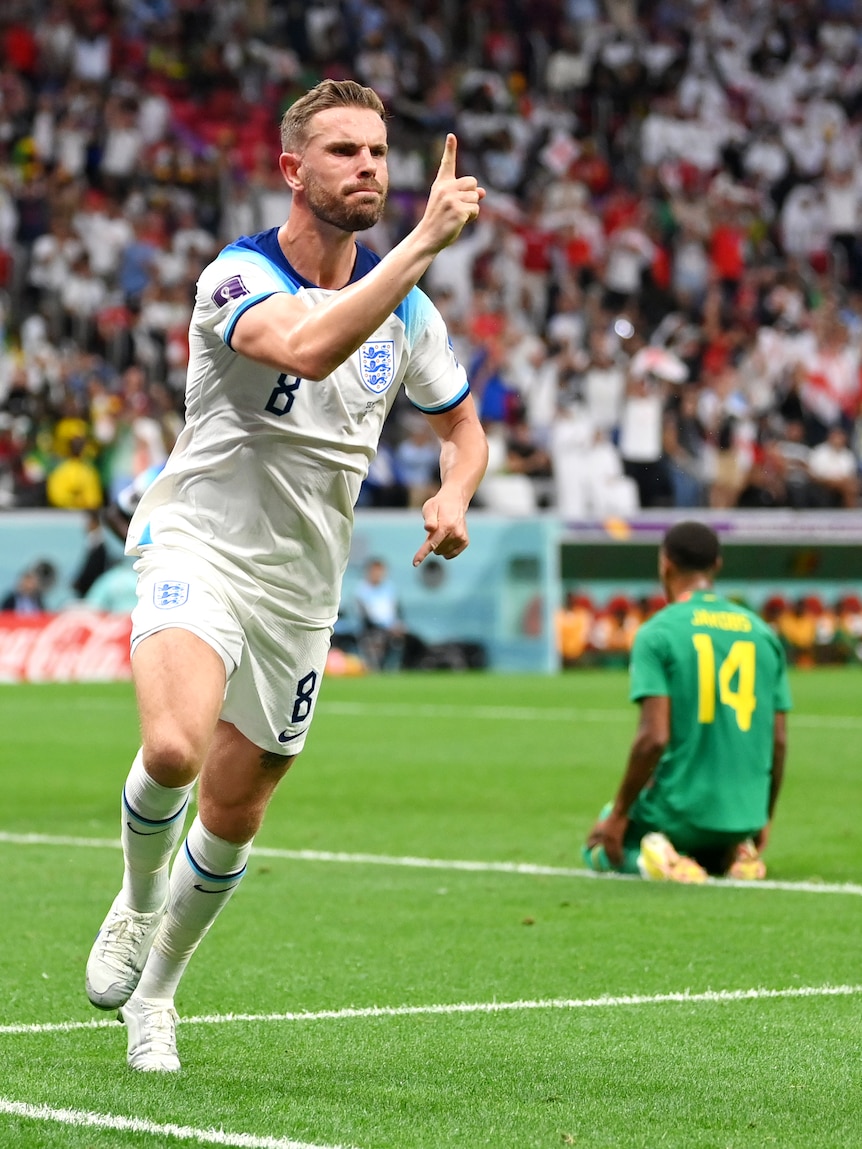 Free-scoring England extended their unbeaten record against African teams with a 3-0 victory over Senegal on Sunday that included a first goal at this World Cup from captain Harry Kane as they set up a quarter-final clash with holders France.

England had initially looked sluggish against Senegal’s pacy forwards, in the two nations’ first ever encounter, with a wonderful one-handed save by Jordan Pickford stopping Boulaye Dia from giving the African side a shock lead.

But Jordan Henderson settled England’s nerves in the 38th minute, stroking the ball home after being played in by Jude Bellingham at the end of a lovely passing move.

Kane struck a ferocious shot past goalkeeper Edouard Mendy with the last kick of the first half, leaving him one goal behind Wayne Rooney’s record of 53 goals for England.

Nippy winger Bukayo Saka bagged the third with a neat chip over Mendy after a cross by Phil Foden in the 57th minute.

England’s goalfest in Qatar — 12 so far — equals their previous best World Cup total at Russia 2018 when they made the semi-finals. They scored 11 in winning the world title in 1966.

England will next face France, who beat Poland 3-1 in the earlier game.

Look back at how the match unfolded in our blog.

That’s where we’ll leave it

Congratulations to England on their win, and commiserations to Senegal, whose tournament comes to an end – but they have to be proud to have made the knockout stages without star striker Sadio Mane. If he had been fit, who knows?

That brings out coverage to an end for this morning.

Tomorrow morning there are two more round of 16 games – Japan face Croatia at 2am AEDT, and Brazil takes on South Korea at 6am AEDT – will Neymar make a return for the South Americans?

We will see you back on the blog for the later game – in the meantime I’m Andrew McGarry, thank you for joining me for this morning’s action.

Phil Foden had a strong game, but I think Jude Bellingham had another blinder for England down the right, setting up two of the three goals – he was my man of the match.

In other good news for England, Harry Kane finally got on the scoresheet, and he will be hungry for more against France.

Interesting to note how times have changed – when England won the World Cup in 1966, they scored 11 goals for the tournament – in 2022, they have scored 12 goals in four games so far!

Really tough, knockout games are never easy. We showed great maturity through the tournament, and 3-0 against a really good side,credit to the boys, the mentality was top from the beginning and we took our chances when they came.

Kane is happy about the role of young guns Bukayo Saka, Jude Bellingham and Phil Foden.

Brilliant, all three of them having big parts in the goals to date, that’s what we need, we have a great mixture of youth and experience now, and another knockout win. Over the years it has not been easy for England, so to win 3-0 is just a really great night.

And now for France in the last eight?

We enjoyed this one, but of course our focus turns straight to that. It is going to be a tough game, they are reigning champions,but it will be a good battle. We recover nicely now and then get ready for the game.

A good night for Gareth Southgate

The whistle goes, to end Senegal’s run at the World Cup.

To be honest, they never looked likely as soon as Harry Kane got the second goal on the stroke of half-time.

They didn’t threaten much in the second half, and England cruised after Bukayo Saka got the third.

That’s a strong performance by Gareth Southgate’s men – but the challenge from France next up will be a lot bigger.

The corner goes nowhere and we are into the final minute at Al Bayt Stadium.

Chance here for Senegal as England give away a free kick for a high boot from Declan Rice.

Sadly, the free kick cannons off the wall and away.

But there is a corner now on the right. Last chance here?

Jack Grealish puts England in down the left, the cross comes in to the back post, Marcus Rashford tries to finish, but the angle is too much and he hits the side netting.

89′ – Another move down the right for Senegal

Senegal are looking better down the right with Youssouf Sabaly – he makes inroads his cross comes in but the ball is skied high into the stands. Kind of sums up Senegal’s night.

That was better, some play down the right before the ball came in for Papa Gueye, whose shot was deflected for a corner.

Unfortunately for Senegal, the resulting ball was easy pickings for Jordan Pickford in the England goal.

85′ – Time ticking down for Senegal

The game is over as a contest at this point, the question is whether Senegal can make an attack count and get a consolation goal.

Jordan Henderson comes off for England, having started the ball rolling for the Three Lions with his first half goal.

As usual he has run a huge distance, and he comes off satisfied, to be replaced by Kalvin Phillips.

England are not putting the cue in the rack here – there is still an appetite for goals.

Marcus Rashford got in down the right, and his cross was almost perfect, with Harry Kane lunging to meet the ball but it just eluded his foot. That would have been four, surely.

Frustrations are getting loose here – Kalidou Koulibaly goes in the book after a challenge that caught Harry Kane to the back of the knee.

Jude Bellingham comes off for England after a brilliant game, with Mason Mount coming on.

74′ – Senegal hit the side netting

There was a decent opportunity there with a free kick to Senegal straight in front 25m out. Pape Matar Sarr hit a nice free kick that bulged the side netting – but Jordan Pickford had it covered for England.

Senegal take off Boulaye Dia for Famara Diedhou up front. It hasn’t been Dia’s night – but then it hasn’t really been Senegal’s night, either.

68′ – Senegal attack comes to nothing

Senegal are struggling to make headway here – a rare attack down the right sees a good ball played in, but the forward turns the wrong way and the ball goes behind him.

Frustration here for the Lions of Teranga.