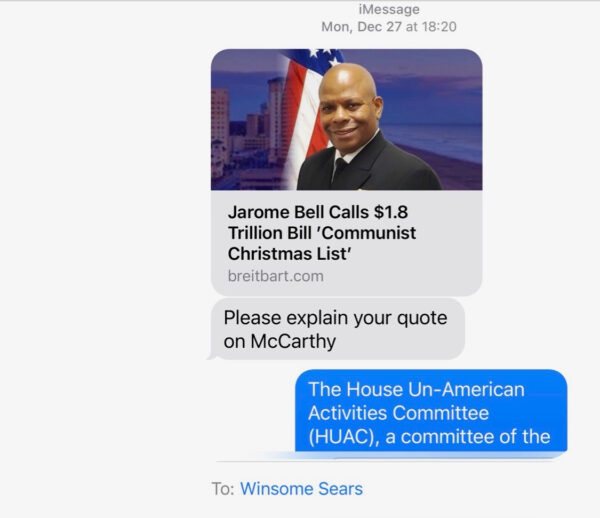 Winsome Sears, Virginia’s anti-Trump, GOP Lt. Governor, expressed her support for communism in a series of text messages that have been exclusively obtained by National File. In the texts, Sears attacked America First candidate Jarome Bell and disavowed efforts to safeguard America from hostile influence and infiltration operations, like those of the Chinese Communist Party.

“Please explain your quote on [Joe] McCarthy,” Winsome Sears wrote to Jarome Bell in a December 2021 text message, scolding him for anti-communist remarks he made in an interview with Breitbart News.

The message kicked off a string of others like it, with Sears making clear her opposition to taking on the communist threat against the United States.

Winsome Sears’ seeming endorsement of communism, or at least of letting communism slide in the name of political correctness, came just over a month after she was elected to be Virginia’s Lt. Governor, supposedly as the MAGA member of Glenn Youngkin’s GOP ticket.

“When you decided to agree with [Joe] McCarthy, that was not a good move,” Winsome Sears went on to write to Bell, completely dismissing the well-documented communist threat.

In the interview, which was held during Bell’s GOP Primary campaign for Congress, the 27-year Navy vet was reflecting on the deep and long-term infiltration of America’s government by communists and hostile communist powers, like the CCP.

He proposed bringing back the House Un-American Activities Committee (HUAC) to root out communist infiltrators and stare down the CCP threat. In its 1950s heyday, the HUAC was closely associated with anti-communist Senator Joe McCarthy.

“You know the old Joe McCarthy witch hunts,” Bell said in the 2021 interview.

“Joe McCarthy got a bad rap, but you know what? It turns out that he was 100% correct the whole time. We do have a commie takeover at the highest levels of government,” Bell, then a congressional candidate, told Breitbart’s, Matt Boyle.

Communism has been infiltrating the United States, “probably going back to the reliable racist Democrat Woodrow Wilson,” Bell said in the interview, adding that “communism is not compatible with Western Civilization.” 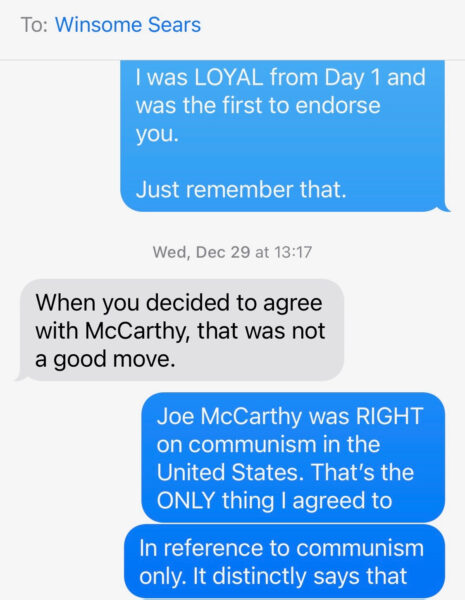 Though history has proven that McCarthy, his Senate committee, and the HUAC were right about communism, Sears parroted the usual left-wing claims used to deride the deceased Wisconsin Senator and World War 2 veteran in her lambasting of Jarome Bell’s anti-communist platform.

In subsequent text messages that have also been exclusively obtained by National File, Winsome Sears called Bell’s anti-communist stances “indefensible” and claimed that “there was no way that Joe McCarthy was a decent human being.”

Bell tried to encourage Sears to join him in taking a leading role in fighting communism, especially as it targets the black community most severely, but she refused, continuing to bash Bell, McCarthy, and the generational fight against communism in America. 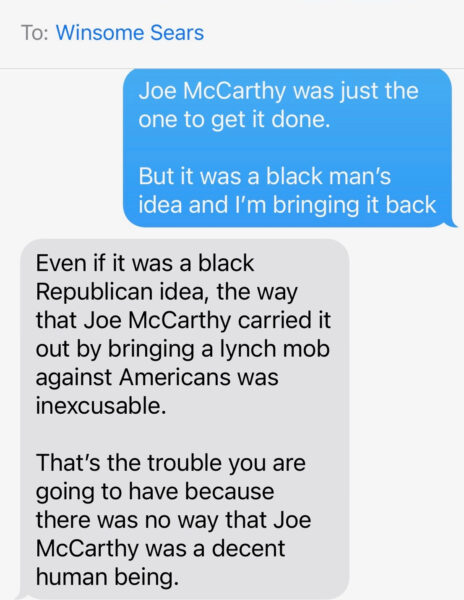 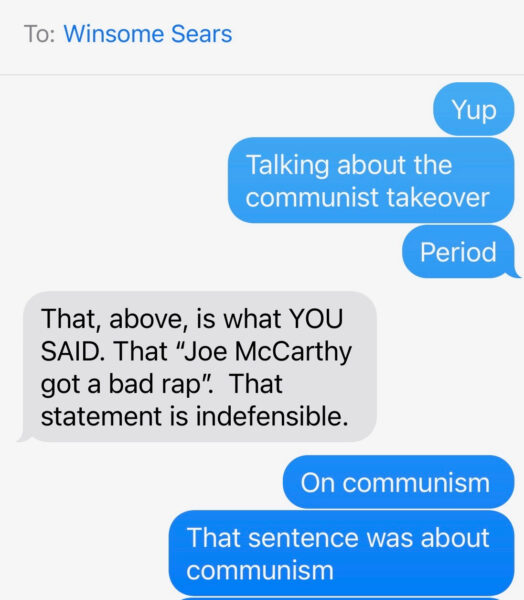 The revelation that Winsome Sears attacked the anti-communist principles of Jarome Bell, one of her earliest and most prominent supporters for Lt. Governor, comes the same week that she joined the GOP establishment in attacking President Trump, scapegoating him for the midterm failures of active GOP leadership, before all the results have even been announced.

In doing so, she made it official that she won’t be backing Trump, whose MAGA movement is the very reason she’s in office, for President in 2024.

The midterm week remarks were a long time coming for Sears, many believe, as she’s previously danced around the issue of 2024, refusing to back Trump in an interview earlier this year. They were also synchronized with a massive GOP establishment and corporate media turn against Trump, in favor of Glenn Youngkin and Ron DeSantis.

Speaking with National File, Jarome Bell says that Winsome Sears is completely controlled by anti-Trump Axiom Strategies and the GOP establishment, who he says came in and bought her the Lt. Governorship after she ran out of money in a hard-fought nominating process, that she won thanks to MAGA voters.

“She alienated the exact people that got her elected.”

“Now, she’s toting the anti-Trump movement’s water because she owes them.”

“I hope she enjoys her next 2 and a half years in office because that’s it for her political career. Sad.”