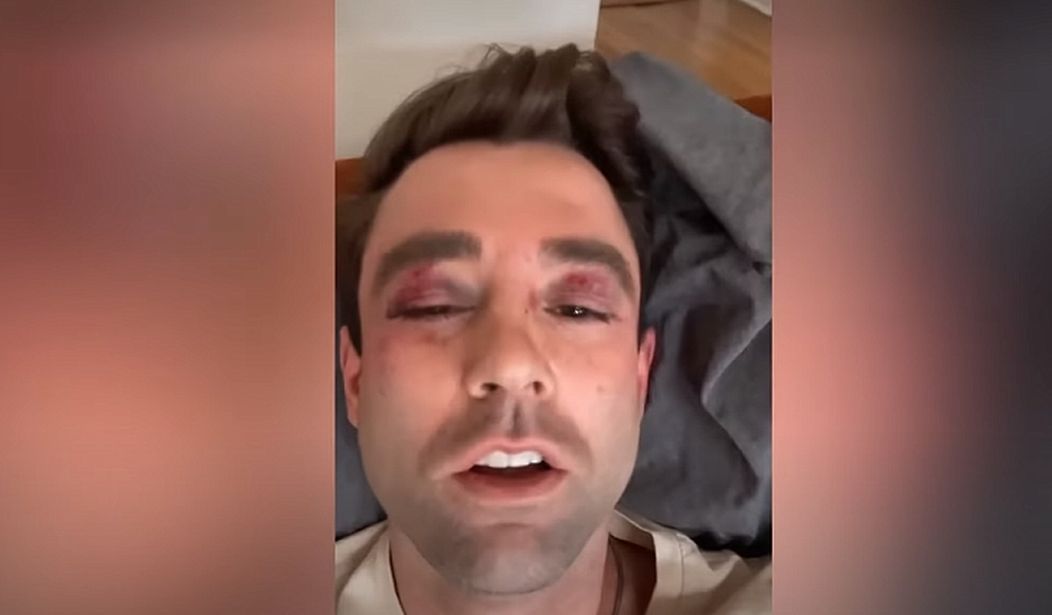 Fox News weatherman Adam Klotz was attacked and beaten on a New York City subway train in the Chelsea neighborhood of Manhattan Saturday night after he attempted to stop a group of teenagers from hassling an elderly man. Klotz, who was returning home from a bar after watching the NFL playoffs, posted details of his ordeal in a pair of Instagram posts after being released from hospital:

Yeah, last night coming home from watching the Giants game at a bar on the subway. This older gentleman was being hassled by this group of like 7 or 8 teens and I was like you guys, cut that out, and they decided all right, if he’s not going to get it, then you’re going to get it, and boy did they give it to me. They had me on the ground. My ribs are all kind of bruised up.

They, they got, like, they got their hits in, but that guy, he got out of there. He’s fine and the cops grabbed a couple of these kids and you know, I got X-rays. I’m OK, this is all going to heal so it’s all good, you know.

The first thing that jumps out is Klotz’s incredible bravery. He had to have known that by attempting to interrupt an assault by a group of depraved teens, he was going to get his a** kicked, or worse. He went on to describe his injuries:

Hear me out though. You should see the other guy. [Attempts to laugh.]

My side? Don’t laugh. My side is worse, so much worse than my face. And the thing is the other guy—it’s not really a guy, it’s children, like 5-6 children. WHERE ARE THE PARENTS?! God, don’t don’t don’t let your kids come beat me up in the middle of the night again. Please—parents!—watch your children.

“Where are the parents?” That’s the question of the hour. Here’s the first of his two posts:

He later posted a second, indicating that even though he was being funny about the situation, he did take it seriously. It’s the second video in this series:

Police caught three of the assailants, a 15-year-old and two 17-year-olds—but guess what? This being today’s America, they were released to the custody of their parents because they’re juveniles, and no charges have been filed.

In addition to showing bravery, Klotz also shows a good sense of humor and an upbeat attitude:

i’m glad we are getting some attention on subway crime, but being forever introduced as, “you might know him from such things as getting viciously beaten by teens,” is gonna be tough

while the headline I just read, “viciously beaten by teens,” is true, it’s doing way more damage to my ego than the physical beating did

While I applaud such a positive reaction, I can’t say I would have done the same. I’d have been furious and terrified, p***ed off that this happened to me, and p***ed off that this is happening in America. Inner-city violence in America is no joke, and it’s ruining the formerly great metropolises of Seattle, Los Angeles, and Chicago among others.

A friend sent my article about the zombie streets of the Kensington neighborhood of Philadelphia to a liberal relative of his, and she responded by saying that for Republicans, talk is cheap, and they offer no solutions. Well, I beg to differ: here are some solutions right now. Recall or impeach woke, George Soros-backed, soft-on-crime district attorneys like LA’s George Gascon, Chicago’s Kim Foxx, Manhattan’s Alvin Bragg, and Philly’s Larry Krasner. Get rid of no-bail laws and start actually enforcing crime. Return to the broken windows method of policing which worked quite well in saving New York from the rampant crime in the 1990s. Hold bad cops accountable but stop demonizing the rest. Take the “defund the police” movement and throw it into the landfill, because it’s garbage. And, since I’m grabbing onto the third rail with both hands, how about, stop destroying the nuclear family and acting like fathers don’t matter?

Kudos to Klotz for his bravery and his outlook—but don’t forget to make Democrats pay at the ballot box next election so we can stop this endless cycle of violence.