From Deception to Demand: US Fentanyl Users Now Want Fentanyl 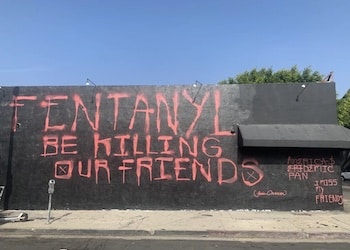 While addicted to opioids, 35-year-old Sherman Oaks native Matt Meakin once lived in Skid Row, a permanent, decades-old, sprawling homeless encampment adjacent to million-dollar condos in the heart of downtown Los Angeles. The area has long been synonymous with poverty, alcoholism, and drug addiction. But to many, it’s also a stable community.

Meakin is now off opioids and works as “sober companion” to celebrities in the throes of drug addiction (something like a round-the-clock babysitter). He himself looks like a middle-class kid who has broken bad, wildly unshaven with tattoos on his hands, chest, and neck.

Meakin maintains affection for the area, and during a recent visit to Skid Row, he nods to shoeless friends and unzips tents to check in on old associates. He talks about how, not very long ago, dealers on this block — Wall Street, between 6th and 7th streets — offered crack and heroin.

“Now, those drugs are very hard to find,” he said. “There’s like maybe one guy out here selling pure heroin, but it’s basically non-existent.”

Also missing from the scene are “blues,” the fake pills that were cut with fentanyl and intended to replicate the M30 oxycodone tablets. Trafficked in huge quantities from Mexico, the blues were the first blockbuster pressed tablet made by Mexican criminal organizations, who began producing them around 2016.

By 2019, blues were proliferating in the United States. The pills circulated among Skid Row denizens and wealthy users alike, and to the untrained eye they closely resembled real M30s. Untold numbers of people died without ever realizing they’d consumed fentanyl.

Nowadays, however, it’s no longer a secret. Fentanyl dominates the drug supply on the West Coast, and increasingly across the country. Powdered fentanyl, along with methamphetamine, are about all you can find here on Wall Street, said Meakin; and even the methamphetamine is likely to be cut with fentanyl.

As for the blues, they’re still out there, but they are fooling fewer and fewer people.

“People are consuming them with full knowledge they are fentanyl, not oxycontin,” said Emanuel Sferios, founder of DanceSafe, who has closely tracked the opioid epidemic, referring to the time-release version of oxycodone. “Many — if not most — illicit opioid users these days know they’re consuming fentanyl.”

So evolved is the market that fentanyl has finally developed a nickname, at least in Southern California: “Fetty.”

“Fetty is like another name for fentanyl,” said Mary Schafer, a former user based in San Diego. “No one really says ‘fentanyl.’ ‘You got fetty?’ It doesn’t sound so bad when you say it in public.”

Mexican organized crime groups may have noted the change. They are now churning out multi-colored “rainbow” M30 pills, which are showing up in drug busts around the country. It’s unlikely many users believe the rainbow pills are a legitimate pharmaceutical product and the DEA says it is a cunning way to attract younger users.

The nickname also demonstrates that many American users, perhaps the majority, now realize when they’re consuming illicit fentanyl. Up until now, the fentanyl crisis was largely characterized by users being unaware that fentanyl was adulterating drugs like heroin, cocaine, methamphetamine, and counterfeit pills.

Fentanyl is still adulterating those drugs, but for the first time, most American users seem to realize it, particularly when it comes to opioids like heroin and pills like oxycodone.

During the mid-2010s, in the fentanyl crisis’ early days, the East Coast was hardest hit. As the epidemic moved to the Southeast and Midwest, it was described as a “supply side” phenomenon where fentanyl was rarely sold as fentanyl, instead cut into heroin, methamphetamine, and cocaine. Most users didn’t ask for it; it was an under-the-radar killer.

“[V]ery little drug slang has developed to describe fentanyl,” said Sarah Mars in 2018, a researcher in the Department of Family and Community Medicine at the University of California, San Francisco, “which lends support to the notion that is not a demand driven epidemic.”

And so, in the west, fentanyl has had less impact as an adulterant, and more impact as a drug of choice. It is an alarming — and stunning — development. It was only 2015, after all, when the US Drug Enforcement Administration (DEA) said fentanyl was “unlikely to assume a significant portion of the opioid market,” owing to its short length of its action and high mortality rate.

This trend has fully blossomed on the US West Coast. From Seattle to San Diego, fentanyl is being sold as fentanyl, with street users asking for it by name (or nickname). In the process, fentanyl is killing more users, particularly the powder, which is injected or, increasingly, smoked off aluminum foil (which, according to some experts, is not any safer).

In fact, people who are in the depths of their addiction “are actively seeking out powdered fentanyl,” said Adam Gordon, Criminal Division Opioid Coordinator for the US Attorney’s Office of the Southern District of California. “It’s borne out by every single statistic that we have.”

It’s also borne out in overdose statistics in the United States, which once again set an all-time record in 2021. There’s little reason for optimism moving forward. Experts interviewed for this story agree that fentanyl’s West Coast shift from a supply-side driven phenomenon to one that is demand-driven is likely to spread across the country.

“People who are seeking out fentanyl don’t like the pills because the pills are too weak, too inconsistent in terms of the actual strength,” said Gordon.

An Ominous History to the North

For a sense of where things are going, a good comparison might be Canada, which has been dominated by fentanyl for years now.

Canada and the United States are two of the only countries with fentanyl epidemics, both driven by opioid over-prescription. Yet the crisis has developed differently in Canada; Mexican criminal organizations aren’t so involved there, and while the US crisis went from East to West, the Canadian crisis has gone from West to East.

It began in Vancouver, which is, in many ways, ground zero for the North American problem. More than 10,000 people have died of drug overdoses since 2016 in British Columbia, and in 2021 fully 83 percent of those deaths involved fentanyl.

Around 2016, the heroin supply in Vancouver began dropping off, and fentanyl began being sold “as fentanyl,” said Travis Lupick, a journalist, Vancouver native, and author covering the crisis.

“There was a shift to an acceptance that fentanyl was all that there was left,” he added.

Fentanyl got to Toronto a few years later, and now dominates the country. “I think the rest of the United States is going to get there too,” said Lupick, who is now based in Southern California.

This is not to say users prefer fentanyl; rather, many simply describe it as a cheap and efficient way to relieve dope sickness, or when a user is experiencing withdrawal symptoms like nausea and insomnia, among others. When Meakin was using, for example, he liked heroin more, yet eventually found himself seeking out fentanyl. “Once you go to fentanyl you never go back,” he said. “It’s just too strong.”

Meakin hit rock bottom in 2020 when he resolved to kill himself, shooting up a large dose of fentanyl in his car on Skid Row. Yet miraculously, he says, while he was passed out a homeless man reached through his open car window, aimed Narcan — the medication designed to reverse the effects of an opioid overdose — into his nostril, and squeezed. Then he repeated the process with his other nostril. It saved his life.

He’s since gone through treatment at Red Door Life in Los Angeles and now helps others battle their addictions. He practices radical harm reduction, sometimes bringing his celebrity clients to Skid Row to help them procure what they need, in order to minimize risk.

“If someone’s been awake a week on meth, they’re not going to have the best head on their shoulders, but I have a good head on my shoulders,” he said.

He carries Narcan wherever he goes, knowing that his clients will inevitably need it, just like he once did.

“With fentanyl, it’s just a matter of time before they overdose,” he said. “And fentanyl is everywhere.”

As he walks down Wall Street, surrounded by homeless encampments, there’s an aroma of freshly cut flowers.

*Ben Westhoff is the author of Fentanyl Inc.: How Rogue Chemists Created the Deadliest Wave of the Opioid Epidemic