Gilberto Landeros Compares Arrest Of “El Plaga” With That Of “El Tolín”. 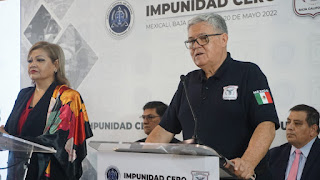 On Saturday morning, members of the State Citizen Security Force (FESC) intervened a vehicle with 3 people on board, which was speeding in the Alamitos neighborhood, in Mexicali.

However, the suspects responded to the agents by opening fire with long weapons, which led to a chase and later a confrontation with agents of the Mexicali Municipal Public Security Directorate (DSPM). The confrontation culminated in the shooting of one of the assailants and the arrest of “El Plaga” in the Hípico neighborhood.

Landeros Briseño pointed out that it was an attack against the FESC elements and assured that the arrest was at the same level as the arrest of “El Tolín”. El Tolín” was arrested on July 2 in Playas de Rosarito after he was present in a confrontation with another antagonistic criminal group.

“I think he is on the same level as Tolin, the one who was arrested in Rosarito. And we will continue with all the lines of investigation, of police intelligence, to continue having good results,” he said.

Cristian Alexis “El Plaga” began his criminal career in Ensenada, where he was part of the Los Aquiles group of the Sinaloa Cartel.

In 2020, he was identified as operating for the same cartel in Mexicali, in the group known as Los Rusos, led by Jesús Alexander Sanchez Felix and/or Miguel Angel Gaxiola, alias El Ruso. There he commanded a cell called Los Zorros, dedicated to contract killings, drug dealing, and human trafficking in the western part of the city, in the Progreso neighborhood and surrounding areas.

After Saturday’s confrontation, preliminary reports from the FESC indicated that El Plaga was accompanied by two other people.

One of them was the man who opened fire on the Mexicali Municipal Police officers and who was killed at the scene. He was identified as El Plaga’s alleged security chief.

According to Pedro Mendívil García, head of the Mexicali Municipal Police, it was thanks to this individual that El Plaga managed to flee on foot from the crossfire.

Both Mendívil García and Landeros Briseño denied that there was a third assailant in the confrontation. This despite the first reports issued by the FESC and the fact that neighbors of the Hípico neighborhood indicated that the authorities had detained two of them.