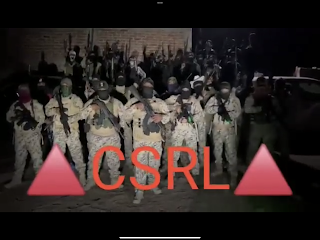 A contingent of Santa Rosa de Lima Cartel hitmen respond to the narco messages put up yesterday by members of the Jalisco New Generation Cartel in Guanajuato. In the video they challenge El Doble R and claim that Guanajuato continues to belong to “El Marro”.

Well, let’s see here you sons of fucking bitches from the Jalisco New Generation Cartel. You sons of bitches are trying to intimidate us with your narco messages claiming you’re the shit. The real deal here are the absolute mob of El Marro. It’ll always be the Santa Rosa de Lima Cartel you sons of bitches. You’re out there claiming that we’re on our last desperate attempts of a drowning man.

When in all actuality it’s you sons of bitches that can’t handle us. You fucking roaches need to come on out for that armed confrontation. We’re currently in the towns of Apaseo, Celeya, Irapuato, Salamanca, Yuriria, Moroleón, Salvatierra, or wherever the fuck you want to meet us for that battle. You’re trying to intimidate the townspeople with messages on those little tarps of yours claiming that we extort and kill innocent civilians.

If that’s the case then what the fuck are you sons of bitches? You fags are the same exact thing all cartels claim to be. There have been so many innocent civilians killed by you guys. But we’re supposed to believe you’re not committing these acts. You’re all the same trash like every other cartel out there. Just the same you’re out there placing your tarps. Let me know where it is that you sons of bitches are having them done so that I to can get in on those good deals.

We honestly don’t need funds to take you gang of gay assholes out either. Tripa, you can go fuck your mother. You son of a bitch I’m going to get up close and very personal with you for talking all that shit about how El Doble R is this and that. The state of Guanajuato belongs to Mr. Marro you sons of bitches. And there’s more than enough of Marro’s gunmen here for later as well…

We are the absolute mob of Mr. Marro you sons of bitches!