Hitmen On Motorcycles Chased And Shot Helicopter That Crashed In Aguascalientes, Witnesses Say 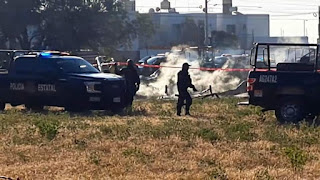 Witnesses report that men attacked the helicopter in which the state Security Secretary, Porfirio Sánchez Mendoza, was traveling.

Testimonies gathered in Aguascalientes state that, before crashing, the helicopter in which the Secretary of Security, Porfirio Sanchez Mendoza, was traveling was attacked with long weapons by individuals on motorcycles.

According to witnesses who gave their statements to El Heraldo de México, the alleged attack on the helicopter began in the community of San Antonio de los Horcones, where subjects on up to seven motorcycles began chasing the aircraft and shooting at it from the ground.

After realizing that the helicopter’s propellers had been hit, the attackers headed for the municipality of Jesús María.

According to witnesses, the helicopter tried to avoid the fire, but was unsuccessful.

According to the governor of Aguascalientes, Teresa Jiménez, the aircraft reportedly went down after participating in a surveillance operation.

“Everything indicates that it was an accident,” said the governor at a press conference.