How an organization is promoting non-violence, tolerance, and peace in school education across the Middle East 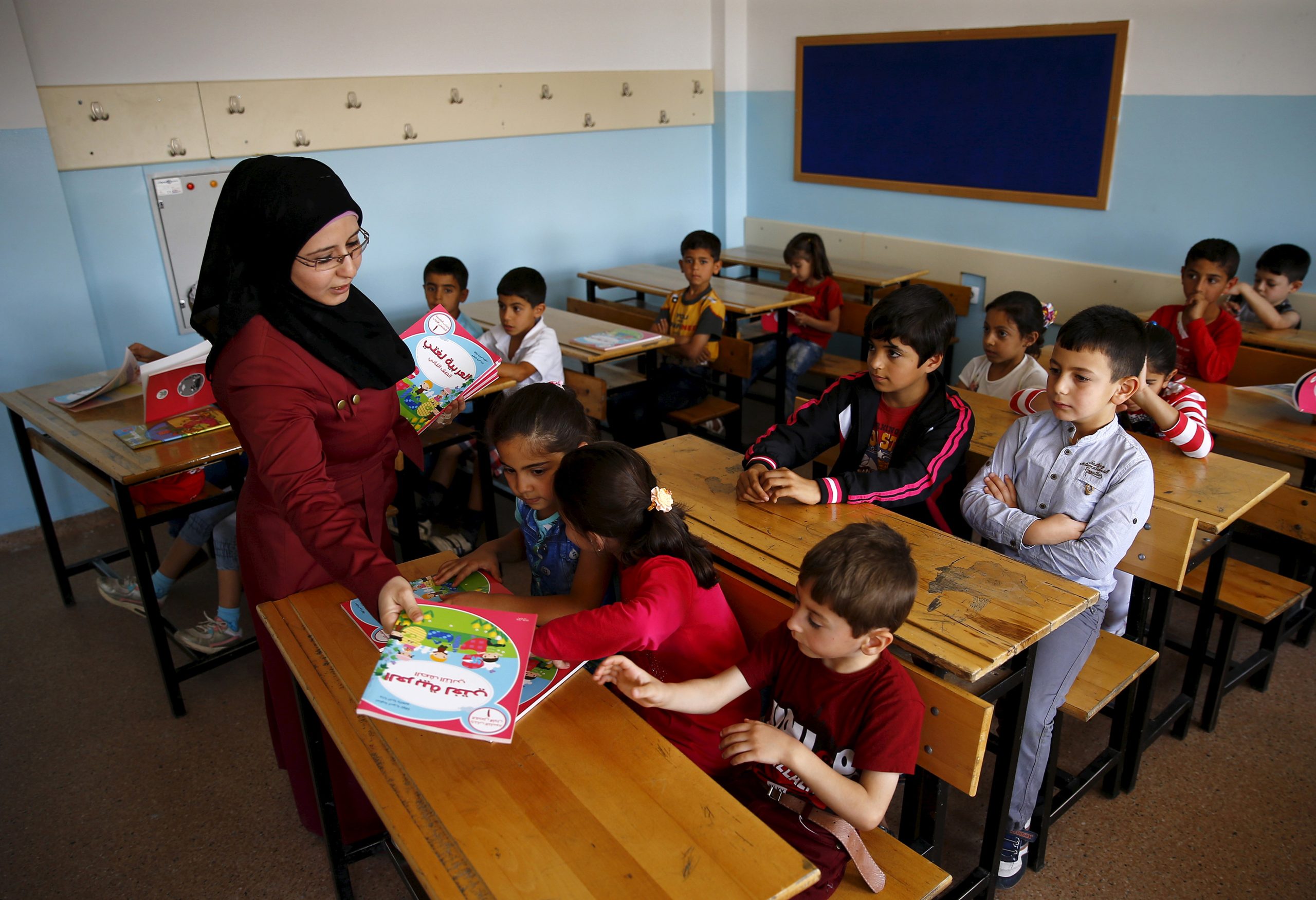 Note: This piece was adapted from the IMPACT-se’s research and website.

The Institute for Monitoring Peace and Cultural Tolerance in School Education (IMPACT-se) brings a practical approach to the field of educational research and policymaking. When analyzing the contents of textbooks used in national school curricula, it assesses content in relation to international standards of peace and tolerance, delving into parts of the curriculum that meet and do not meet these standards.

This work, which has been progressing for more than a quarter of a century, rests on the assumption that school education is the key to fostering the development of peaceful and tolerant societies. Of course, it can also be a tool for political and religious radicalization when exploited by ill-intentioned actors. Given that textbooks reveal what a society believes at present and its future aspirations, they are powerful political predictors.

The principles of peaceful and tolerant education also apply to educational content produced in conflict-affected areas. It is inarguably important that this material is free from inaccurate, biased, or discriminatory depictions of different groups in society and that students are taught the values of peace, responsible citizenship, equality, and tolerance in all circumstances. In conflict zones, peace education aids peacebuilding and conflict resolution.

Attitudes promoting peace, tolerance, and non-violence range from a national to an international context or one that blurs the lines between the two. In a national context, on the one hand, IMPACT-se examines state-approved education with regard to ethnic and religious minority groups as well as other marginalized groups in society, such as women and immigrants. Examples of these include textbooks referencing the Sunni-Shia divide or the traditional role of women in Iranian and Saudi Arabian curricula, immigrants in the United Arab Emirates’ multicultural school system, or the Kurdish community in the Turkish education system. On the other hand, IMPACT-se also analyzes the curricula of minority groups—such as the Orthodox Haredi Jewish education system and Arab language curriculum in Israel—to monitor references made to an ethnic, religious, or cultural majority.

Case studies of international conflicts and animosity between peoples or coalitions of nations relevant today represent another category, such as those of Ukrainian and Russian history textbooks. Here, textbooks present skewed historical narratives and dismissal of the “other,” with little impetus for peace-making as a strategy to resolve conflicts. The curricula do not offer balanced perspectives on historical events, which reduces students’ ability to question such narratives and move beyond them toward conflict resolution. The historically longstanding conflict between Palestinians and Israelis, however, is a case that transcends national boundaries. Not only does IMPACT-se pay attention to references made to Palestinians in Israeli curricula and vice versa, but also how the conflict is framed in countries with a large Palestinian population—Jordan being the most prominent example.

IMPACT-se examines textbooks from many disciplines covering entire curricula, including Islamic studies, Jewish thought, moral education, history, geography, biology, mathematics, and the sciences. In addition to textbooks, teacher guides constitute authoritative blueprints for how educational materials are interpreted and presented in the classroom and, thus, serve as key sources for research. Furthermore, as the United Nations Educational, Scientific and Cultural Organization (UNESCO) highlights in their guidebook, beyond the identification of obvious content—such as references to and the frequency of text and examples inciting hate or violence toward the “other”—a careful approach is necessary to uncover hidden curricula and underlying assumptions in the way historical events, religious issues, and ethnic and racial backgrounds are represented, or how civic and moral norms are passed down to future generations.

Across its corpus of work, IMPACT-se is guided by international standards prescribed by declarations, international recommendations, and documents of the United Nations (UN) and UNESCO on education for peace and tolerance. Such milestone documents include the 1948 Universal Declaration of Human Rights, the 1965 UN Declaration on the “Promotion among Youth of the Ideals of Peace, Mutual Respect and Understanding Between Peoples, the 1965 International Convention on the Elimination of All Forms of Racial Discrimination, the 1995 Declaration of Principles on Tolerance, the 1995 Integrated Framework for Action on Education for Peace, Human Rights and Democracy, and the 1966 International Covenant on Civil and Political Rights.

IMPACT-se’s international researchers are guided by such standards and conventions when searching for wording, imagery, and ideologies likely to foster prejudices, misconceptions, stereotypes, and misunderstandings, or encourage mistrust, racial hatred, religious bigotry, and national hatred. They also tackle ideas or theories that justify or promote acts and expressions of violence, incitement to violence, hostility, harm, and hatred toward other national, ethnic, racial, or religious groups. The end goal is essentially to encourage the development of curricula that promote tolerance, understanding, and respect by developing a capacity for non-violent conflict resolution, using educational materials that are up-to-date, accurate, complete, balanced, and unprejudiced, and employing equal standards to promote mutual knowledge and understanding between different peoples.

To ensure the accuracy of the representation of obvious and hidden content, IMPACT-se combines quantitative and qualitative methods to analyze descriptions of the “self” and the “other,” as well as historical and social constructions within school curricula. A comprehensive review of all disciplines and volumes of textbooks ensures that curricula are assessed as a whole, rather than based on selected books or pages. The identification of key content is assisted by secondary literature on peace education.

As part of the qualitative stage of content analysis, passages and images are classified into categories establishing their significance in inciting hate and conflict, or, alternatively, in encouraging reconciliation and peace. Extracts referencing historical, political, social, religious, and cultural implications are analyzed further. All extracts identified in this process are documented and coded in a program, enabling the ability to contrast extracts within and between subjects. An additional method of discourse analysis allows researchers to account for the importance of idiosyncrasies and particular societal characteristics that vary from country to country.

Further attention is paid to pedagogic specificities in how textbooks of a particular discipline are structured and how they utilize text, imagery, and exercises in unison. IMPACT-se reports do not paraphrase or attempt to illustrate preconceived notions. As part of the quantitative analysis stage, researchers apply frequency and space analysis to determine how much content is dedicated to a certain topic and then verify the validity of the previous qualitative stage.

IMPACT-se is dedicated to conducting follow-up research on the countries and curricula it covers in its reports, keeping up with the ever-changing landscape of domestic and international politics, whose dynamics often filter into educational programs. Such a reality also presents the organization with an opportunity to assess the extent to which improved educational standards promoting peace and tolerance in school curricula have positively impacted emerging policies and vice versa.

Marcus Sheff is the CEO of The Institute for Monitoring Peace and cultural Tolerance in School Education (IMPACT-se).

Image: A Syrian refugee teacher distributes books to her refugee students in their classroom at Fatih Sultan Mehmet School in Karapurcek district of Ankara, Turkey, September 28, 2015. Out of 640,000 Syrian children in Turkey, 400,000 are not at school, a Turkish official told Reuters on Friday, warning that those who miss out are likely to be exploited by “gangs and criminals”. Educating the children among more than 2.2 million Syrian refugees in Turkey – most of whom live outside purpose-built camps – is seen as a critical part of the humanitarian response to the four-and-a-half-year-old conflict. Picture taken September 28, 2015. REUTERS/Umit Bektas