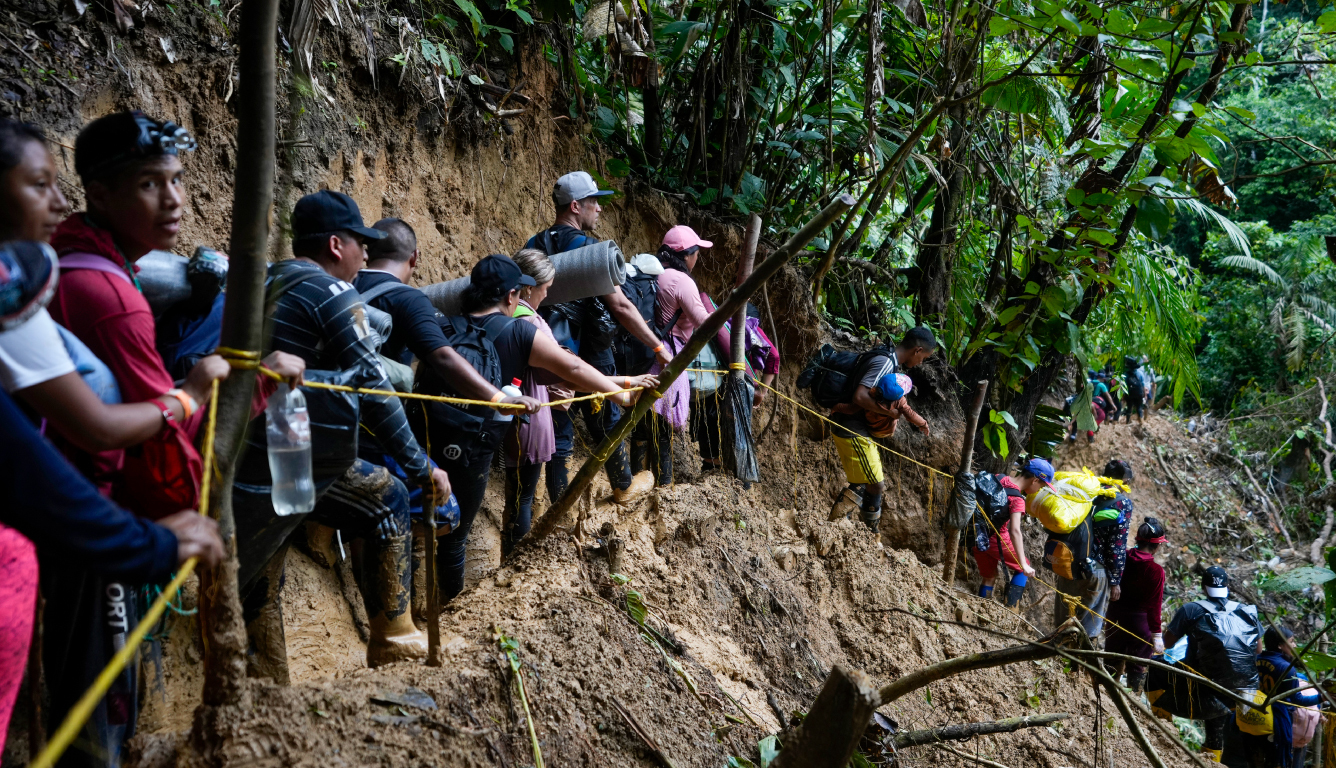 The Darién Gap, a perilous natural border between western Colombia and southern Panama, has become an alarmingly busy route for migrants traveling toward the United States. And criminal networks are preying on this desperation, ready to take advantage at every step.

Between January and October 2022, over 200,000 people illegally crossed the Darién Gap — an all-time record, and one that confirms the passage as one of the busiest migration routes in the world. Long a favored drug trafficking route for Colombian criminal groups, this stretch of densely jungled, mountainous terrain now sees long lines of migrants snaking through the forest. Hundreds have died.

While migrants from around the world are traveling the route, Venezuelans are the most numerous migratory group, with around 134,000 having made the crossing this year. Dozens have lost their lives along the way.

For many, the voyage may be pointless. US authorities have responded by tightening immigration policies for Venezuelans, making their main destination far less attainable.

Below, InSight Crime breaks down how organized crime groups prey on those desperate enough to face death and deprivation in the Darién Gap.

Adults and small children covered in mud, discarded clothing, and dead bodies are all now commonly seen during the Darién crossing. But before embarking on their journey, migrants must get into Colombia.

The initial border crossing into Colombia is often facilitated by coyotes, a slang term for those helping to smuggle people across borders. Once in Colombia, migrants travel to Necoclí, a coastal municipality in the west of the country, before paying around $30 to cross a small segment of the Caribbean Sea by boat to Capurganá or Sapzurro in Acandí, the last town before entering the Darién jungle, El Colombiano reported.

To trek through the Darién, migrants often hire the services of chilingueros, local guides who know the routes and who promise some form of protection while crossing. Choosing the right guide can be the difference between a relatively smooth journey or one that is plagued by dangers, Ana María Cerón, an advocacy manager at Doctors Without Borders (Médecins Sans Frontières – MSF) who attends to migrants when they arrive in Panama, told InSight Crime.

Guides charge between $70 and $150 per migrant, depending on the route they offer, according to research from El Colombiano and the New York Times. In October this year, the average charge was $130, according to a source familiar with the dynamics in the town of Acandí and who spoke to InSight Crime on condition of anonymity. Sexual services are also traded as payment, said Cerón.

The trek is dotted with waypoints where migrants are able to rest and stock up before continuing. Though they must pay to pass through, these points are oases of relative safety. As Cerón pointed out, migrants can be attacked by armed groups at any point along the route.

Most migrants arrive to Panama in the southern province of Darién, particularly in the small town of San Vicente, Cerón said. From there, for $40 per person, they can take a bus to the northern border with Costa Rica.

The flow of migrants does not go unnoticed by groups such as the Urabeños, also known as the Gulf Clan or Gaitanist Self-Defense Forces of Colombia (Autodefensas Gaitanistas de Colombia – AGC), but known locally as the Demonios (Demons). They are in Acandí and reportedly demand $50 for each payment made to the guides, though the amount can vary.

There are also other far safer but more expensive ways to get to Panama. One route departs from Medellín airport and goes to the port city of Buenaventura where migrants travel by cargo ship to Panama. Another takes them by plane to San Andres and Providencia, Colombian islands in the Caribbean Sea, from where they sail to Panama or Nicaragua

Sexual violence is systematic on the route through the Darién Gap.

According to MSF, 14% of the migrants who receive mental health services at the Migrant Reception Stations in Panama suffered some form of sexual violence during the route. Women and children are the most affected. However, there is a worrying underreporting of information. “People are being threatened, they are forbidden to tell the organizations that they experienced sexual violence … sexual violence is not always so clear for the victim when it is blackmail,” explained Cerón.

Human trafficking for the purpose of sexual exploitation and labor exploitation, including child labor, begging, and domestic work, is also a feature of the route. Illegal criminal groups associated with human trafficking are present in both Necoclí, Acandí, and other towns.

Sexual violence is used as a means of payment to pass through different points controlled by migrant smuggling structures. Women are often raped if they have nothing for armed traffickers to steal, according to MSF.

”In a context of such vulnerability, it is unfortunately logical that sexual violence comes from different actors … from those who have some kind of power and decide on the conditions in which people go through,” Cerón said.

In October, Panamanian authorities arrested more than a dozen people in Darién, the province where migrants arrive after crossing the jungle, for their involvement in drug trafficking from Colombia, reported Panamanian news outlet Nex Noticias. Three months earlier, authorities had confronted people carrying 80 “drugs packages” as they crossed the Darién.

Years ago, it was drug trafficking networks and the Revolutionary Armed Forces of Colombia (Fuerzas Armadas Revolucionarias de Colombia – FARC) who controlled the movement of drugs across the border, paying members of local indigenous communities up to $300 per day to carry drugs to Panama. With the signing of the peace agreement in 2016, the drug trafficking business was left without a clear owner.

However, since 2018 there have been reports of the Urabeños using migrants or members of local indigenous communities to move cocaine through the Darién. Between 2018 and 2022, more than 13 tons of cocaine have been seized in Acandí.

Information on the issue is scarce, but the Urabeños appear not to have missed the opportunity to use migrants to ferry drugs across the Darién. In August 2020, Colombian authorities arrested five alleged Urabeños members organizing caravans of 15 to 20 individuals to move cocaine through the jungle.

According to Colombia’s RCN News, the Urabeños were allegedly behind a migrant smuggling ring that began in Ecuador and crossed the Darién, in which migrants were forced to carry drugs if they could not pay the $400 fee to cross.