‘I don’t take it for granted anymore’: Buschkuehl reflects on a record year 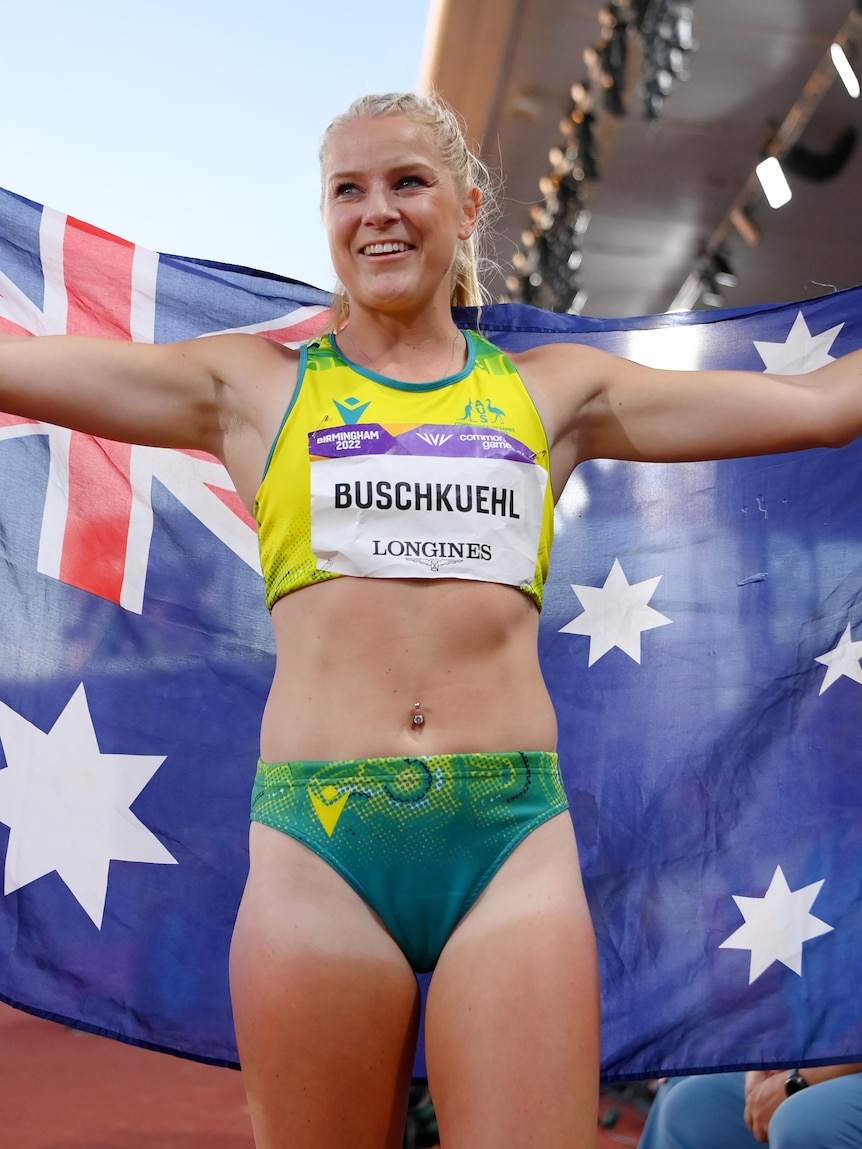 It’s a story of resilience.

No woman in the world has jumped further than Australian champion and record holder Brooke Buschkuehl in 2022. But it’s been far from easy.

Throughout her life, Buschkuehl has defied the odds to become not only a role model in track and field, but a leader beyond athletics, battling through two auto-immune diseases: Coeliac Disease and Hashimoto’s Disease, plus a gluten intolerance, just to name a few.

Throw in the obstacles of coming off the back of an absent domestic athletics season with little preparation, plus overcoming rehabilitation from knee surgery multiple times, Buschkuehl has done it the hard way to get back to the top of her sport.

“There’s definitely been a lot of challenging times throughout my career,” Buschkuehl said.

“Each time you are faced with adversity or a challenging time or an obstacle, you do tend to be able to find strategies to help get you through those really challenging times.”

After initially being told she could be jogging 10 weeks after surgery late last year, the outlook was bleak.

“My quad wasted away to the point which I could barely even walk on it, let alone run on it,” Buschkuehl said.

”My body wasn’t doing what I wanted it to do.”

“It got to 10 weeks and there was no way known I was anywhere near being back jogging or any form of running.”

Remaining positive with a support team of family and friends was critical to helping the two-time Commonwealth Games Silver medallist get back to her peak.

“There’s nothing worse than being an athlete and being injured and having to sit on the sidelines and watching everyone else out there competing. I really struggle with that. I love competing,” she said.

“At the end of the day, it was all about just showing up every day and knowing that if I just kept showing up, things were going to get better.

“And I was told that day in, day out, I have such a great support team around me who really helped keep me as positive as possible through a pretty dark time.”

The wait for Australia’s greatest female athlete in the pit to leap past her own personal best lasted almost six and a half years — a whopping 2,310 days.

In July this year, Buschkuehl broke her own long jump national record at Chula Vista in California, something she credits role models like Bronwyn Thompson, who set the previous 7-metre record in 2002, to be able to know what was is possible in her sport.

In the end, it took a 7.13 metre leap that smashed her 2016 score by eight centimetres to know she was back for good.

“I can’t fathom the fact that that’s what happened not long after getting back into the pit after a pretty lengthy recovery with my knee,” she said.

“To have been jumping at my best this season, it just seems pretty crazy to think.

“I do think I have more in me … my quad actually is [now] probably the strongest it’s been in a long time as well, so I’d like to think that that might help me launch into a little bit further.”

Travelling with health challenges a struggle

For all the highs and lows in track and field, Buschkuehl has kept a humble profile in the sport.

Travelling the world may appeal to many as a perk of an elite athlete’s lifestyle. For the 29-year-old, it’s something more of a dread with health challenges.

“Since being diagnosed with coeliac disease, my outlook on health has changed significantly,” she said.

“It’s an extremely challenging thing being an athlete and living with coeliac disease as well as another autoimmune disease, Hashimoto’s disease, but I do my best to manage both of them as well as possible.”

“It’s not just a food intolerance, it’s when you do consume gluten, it can cause all damage and inflammation, which then leads to you being unable to absorb nutrients properly and a whole list of other symptoms associated with that.

“It’s something that I try really hard not let stress me out too much whilst I am travelling, but it does make things a lot more challenging.

“I tend to not eat out at restaurants or cafes while I’m away when I’m in competition mode because I just can’t trust that the food that I am eating is going to be 100 per cent safe.”

With Hashimoto’s disease, Buschkuehl is on daily thyroxine medication and monthly blood tests to ensure she’s able to stay on top of her levels.

“Being an athlete, you go to show up and perform at your best every single competition, and it’s not worth risking that risking centimetres off your jump because you feel a little bit unwell,” she said.

“It’s really just about putting things into perspective and I know that there are other people out there, other athletes doing it far worse off.”

Father and daughter learning along the way

Coaching your own child may be seen as a rite of passage for junior sport, but at the elite level it’s much rarer.

The unique relationship of Buschkuehl with her father, Russell Stratton, is one that Brooke says she wouldn’t have any other way since he became her coach when she was just 10.

Two decades later, together they’ve ridden the highs and lows of travelling overseas, packing lunches and checking food labels to ensure Buschkuehl had every opportunity to perform at her peak.

“It’s so special … he’s basically learned everything he knows along the way through mentors,” Buschkuehl said.

“It’s something that I never would have imagined would have played out in my long jump career. I’m super grateful for all the time and effort that he puts into allowing me to be the best I can be.

“He knows that some days I might rock up to training and just not feel 100 per cent, and that’s just the beauty of living with two autoimmune diseases.”

For Stratton, there’s more than one role to play, booking kitchens in hotels to ensure daughter Brooke can cook for herself rather than rely on eating out.

“Sometimes it’s a little bit hard because packages are in different languages, and you don’t know if it’s got gluten in it or not. It’s just a work in progress.”

Aside from the challenges of living on the road, Stratton also reflected on the journey they’ve endured together.

“I’m so proud of the person she’s turned out to be.”

“For what she’s achieved, she doesn’t strut around the track like she’s this and this. She’s really humble in what she does.

“There’s only a few parents that coach their own kids at international meets. We get along really well and we work things out together.”

With 2022 in the books and the summer athletics carnival awaiting, Buschkuehl is aiming to use a full domestic season to ensure she builds towards a third Olympic Games at Paris 2024.

“It means everything to wear the green and gold. It was something that I dreamt of since I was in grade one representing Australia,” she said.

“It’s always such a huge honour and not many people get to do it. You’re in a small percentage of athletes that do get to represent your country.”

“It’s really just about making the most of it and realising what a privilege it is as well.”

After placing in the top eight in the last two events, there’s renewed optimism for the woman who outperformed every other female athlete this year in the pit.

“Long jump and athletics means the absolute world to me. It’s something that I don’t take for granted anymore,” she said.

“I’ve been through so much throughout my career and I have learned to really appreciate being an athlete and being a long jumper.

“It’s what I love and I couldn’t see myself doing anything else.”

To watch all the episodes, go to ABC iView.