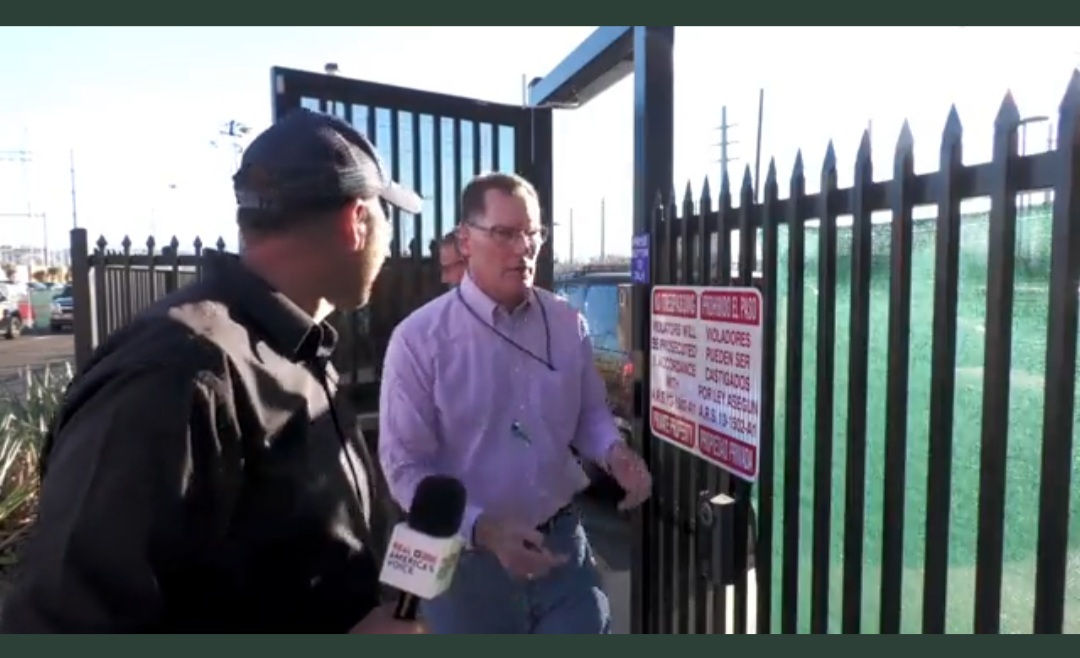 Ben Bergquam is an investigative reporter for Real America’s Voice and the host of Law and Border who was on location this month in Maricopa County, Arizona, to report on the midterm election results.

Bergquam’s reporting is currently going viral with independent media readers because he was forced from reporting about the election details- in an open public area- denied access to press conferences with officials, and then received an email telling him that he was denied media credentials all together for being a reporter of ‘ill repute’.

All of this happened after Bergquam reported on Penske Trucks in the ballot counting area of the precinct where he was reporting from:

More of the Penske trucks at the Maricopa County elections office. Almost like history repeating itself from 2020! Is it in confidence or corruption?@RealAmVoice pic.twitter.com/T2dNfOw0b7

Hours later, Bergquam, along with Gateway Pundit reporter Jordan Conradson, were denied access to the media zones and to press conferences with the country’s elected officials.

The denial of Bergquam’s civil liberties as a known member of the press is shocking.

Gateway Pundit reported on the details of the removal:

“Maricopa Co. PIO (Public Information Officer) Ron Coleman, who was coordinating the press conference, told the two Independent journalists, “You can go to the free speech zone and protest if you want to.” When asked if free speech was allowed on the public property that Conradson pays taxes to maintain, Ron said “no.”

Watch as Coleman tells Bergquam and Conradson that they have to move to a ‘Free Speech’ zone- outside of the barrier security fences that have been designated for protestors, and, according to Gateway Pundit, told that within the security barriers where other press was meeting there was no free speech allowed:

An “approved media pass” issued by the government — which the government can rescind is if wants — is an infringement of the First Amendment. What are they trying to hide?

Bergquam later received a bizarre email from county officials, which he read to Steve Bannon’s audiences on the War Room, on Friday, saying the email read in part:

“You’re denied because you a do not avoid real, or perceived, conflicts of interest and B) you are not free of associations that would compromise journalistic integrity and damaged credibility. So therefore, you are not a bona fide correspondent of repute in your profession.”

Bergquam talked to National File about the corrupt actions of the AZ government and told us:

“It is ironic that we have members of the government who are elected officials denying me access to press conferences about elections, who are the same people in this county who want an open border for anyone in the world.  I have spent years documenting the truth of what is happening here in Arizona, and they know my reporting,” Berguquam told National File.

“It is a joke that they denied me and just one other media outlet, it that is so one sided because Real America’s Voice and Gateway Punidt are the only two outlets denied- so they may as have just said we don’t like you and the way you cover things.  Gateway Pundit already has said they filing a lawsuit and we are looking at options as well.  It is sad that this denial of the First Amendement is where we are right now as a country.  And we can see the problems from burecrats in Washington DC to tyrants in Maricopa County.  It is stupid that they have a press requirement for a national outlet in the first place- who are they to decide who gets to cover elections?  In the end we are going to get the bottom of what is happening here and report the truth,” Bergquam added.

RELATED: Trump Calls For Do-Over Of Arizona Election, Says It Was Stolen From Blake Masters