InSight Crime: The End of (Illegal) Marijuana: What It Means for Criminal Dynamics in Mexico 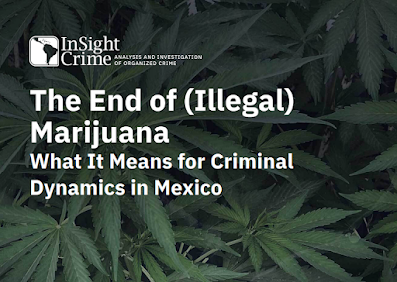 Marijuana legalization has expanded greatly across the United States, the primary destination for illicit drugs produced in Mexico. Today, two-thirds of the US population now has legal access to medicinal or recreational marijuana and the DEA says the majority of the marijuana its anti-drug officials seize is produced domestically.

This has major implications for Mexico’s organized crime groups, who just 10 years ago were the main suppliers of marijuana to the United States. In the mountains of Sinaloa, long one of the country’s epicenters for marijuana production, a transformation is taking place. As prices have plummeted, small farmers are looking to other crops or leaving farming behind altogether and migrating to major urban centers.

But the powerful organized crime groups operating in this region, most notably the Sinaloa Cartel, have adapted and turned to the mass production of synthetic drugs like methamphetamine and fentanyl. Not only that, but they’ve turned inward in an attempt to capitalize on Mexico’s growing — and almost legal — domestic market for marijuana.