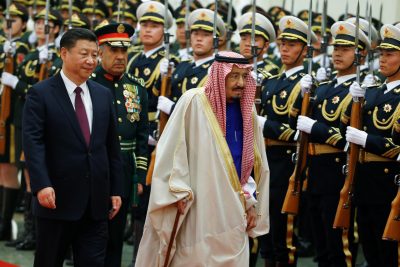 Amid news of US intelligence agencies alleging that China is actively assisting Saudi Arabia’s ballistic missile development program, evidence of Riyadh’s missile development facility and China’s role in its setup is lacking. Many are questioning whether this alleged collaboration marks a shift in China’s engagement with the Middle East from Iran towards Saudi Arabia. It is also unclear whether Beijing can sustain a balancing strategy toward these regional powers.

Riyadh is shifting toward producing its own ballistic missiles to complement its purchases on the international arms market for three reasons.

First is the strained Saudi–US relations. Former US president Donald Trump warned King Salman in 2018 that his rule ‘would not last two weeks’ without US support. In September 2021, the United States removed its advanced missile defence system and Patriot batteries from Saudi Arabia despite attacks by Iran-backed Houthi rebels.

Second, despite having a well-equipped armed forces, Riyadh has a weak air defence system which the Houthis exposed by hitting high-profile sites, such as the Aramco oil facility in March 2022.

This is where China becomes important. Beijing first delivered its liquid-propelled DF-3A missiles to the kingdom in 1988. Saudi Arabia only publicly acknowledged their possession of DF-3As in 2014 when a news report revealed that the kingdom had purchased dozens of DF-21 solid propellent missiles from Beijing in 2007.

China’s missile technology transfer to Riyadh is isolated from its engagement with Tehran. A close examination of China’s policy in the region reveals that it prefers the status quo between the two countries.

In essence, Beijing remains committed to exploiting Saudi Arabia’s aspirations of diversifying its import and export portfolios away from Western countries amid popular calls for pre-conditioning support to the kingdom’s efforts to resolve domestic issues. But nothing suggests that the Chinese are choosing Saudi Arabia over Iran as both countries have significance for China.

Saudi Arabia’s drive to nurture Asian allies also comes directly from its search for new markets for its energy products. As the largest manufacturing state hungry for energy, China is the largest buyer of Riyadh’s energy. China is Saudi Arabia’s largest trading partner and energy customer with a bilateral trade volume of US$87 billion in 2021. The US$245 million arms sale and technology transfer are small chips in comparison.

Despite this, Chinese missile technology assistance to Saudi Arabia will not diminish Iran’s role as Beijing’s most prominent strategic partner in the region. Tehran’s cooperation is vital for the success of Beijing’s Belt and Road Initiative. Iran’s location at the junction of Central Asia, South Asia and the Middle East is critical to access the larger Central Asian steppe that Beijing aims to consolidate into its sphere of influence.

Many Iranians may view Saudi Arabia’s missile acquisition as China’s betrayal. But Tehran recognises Beijing’s preference for non-hostile — if not friendly — relations across the Persian Gulf. Iran’s strategic community is also fully cognisant of the country’s geostrategic location, making its irrelevance to Beijing highly unlikely.

China’s commitment to invest over US$400 billion in Iran over the next 25 years is instructive. Tehran’s firm anti-Western ideology and distrust of the United States assures Beijing of its reliability within the larger China–US competition. Iran will back Beijing if it were to reunify Taiwan with mainland China, which would inevitably bring the United States into the picture.

On the other hand, Riyadh remains firmly under US influence despite recent hiccups. The United States has even reconciled Saudi Arabia and Israel on Iran’s nuclear program, further illustrating its close security cooperation with the United States. Any realignment with China looks improbable as it would mean forsaking the US security umbrella.

This has been a sustaining factor in Saudi foreign policy since its 1945 strategic partnership agreement with the United States. It would be difficult for Riyadh to substitute its dependence on US military hardware as repositioning would mean starving its armed forces of critical supplies — particularly for its air force.

As long as Riyadh remains dependent on Washington for its security, China’s courtship of Riyadh at Tehran’s expense is unlikely. Saudi Arabia’s strategic significance to China also pales in comparison with Tehran. Although Saudi Arabia is Beijing’s largest energy supplier, this is an import chain that China aims to diversify away from.

What could disrupt Beijing’s balancing act between Saudi Arabia and Iran is a US policy shift due to the kingdom’s stubborn OPEC+ policies. The perception that the United States was gradually disengaging from the region is inaccurate. Washington only commits to reducing its military engagements in the region by withdrawing from Afghanistan, not ceding its regional supremacy altogether.

It appears that China can continue its economic posturing in the region amid its reliance on Gulf energy and market access.

Mohmad Waseem Malla is an Information Researcher at the Manohar Parrikar Institute for Defense Studies & Analyses (MP-IDSA), New Delhi. The views expressed here are solely the author’s own and do not represent the institution he works for.