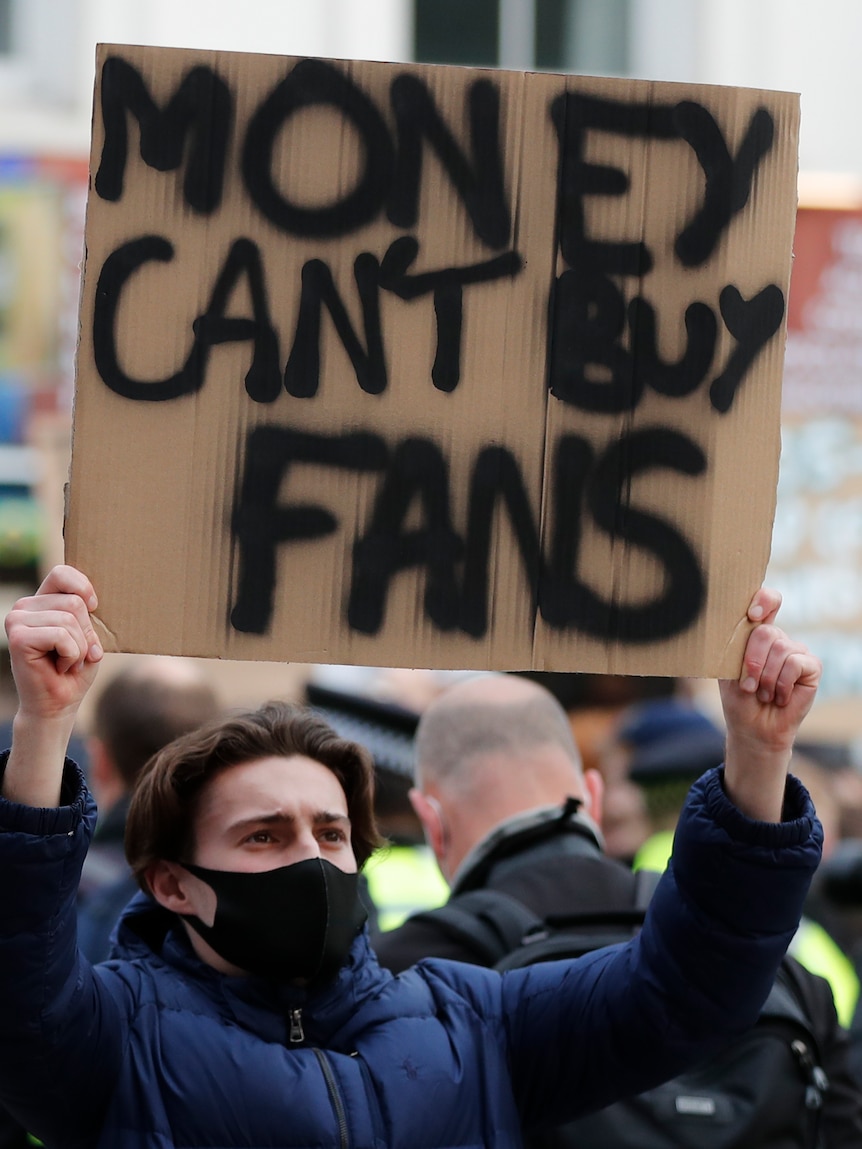 A new football entity wants to create a competition format that rivals some of the biggest and most popular that already exist in a crowded market.

The idea had been proposed years earlier, largely in secret, and involved only a select few decision-makers at the highest levels of certain clubs.

It was driven primarily by the need for revenue — something that was exacerbated by the financial hit many of them took during the COVID-19 pandemic.

They signed a lucrative, multi-year offer with an organisation that was willing to invest a seemingly unignorable sum of money to kickstart the project.

Its launch was framed around taking the sport in brave new directions and appealing to a previously untapped market: tearing up old traditions in order to create new ones, making changes to the few that would ultimately benefit the many.

However, the response from the many was not enthusiastic acceptance. It was, instead, almost universal outrage; not just at the decision itself, but also being kept in the dark about it.

Boycotts, walkouts, and membership cancellations were all used to protest what was viewed as an elitist, out-of-touch “cash-grab” from people in power who have lost sight of what makes the game they govern unique.

Monday’s decision by the Australian Professional Leagues (APL) to sell the grand final hosting rights of the A-League Men, A-League Women and E-League to Destination NSW, the tourism arm of the NSW government, has a number of parallels to the abandoned (but still potentially re-emerging) European Super League (ESL) that consumed club football just over a year ago.

Indeed, the APL’s decision to remove one of the few remaining elements that made the A-Leagues distinct from other major codes like the AFL and NRL, in that its roaming grand final format made it a truly national competition, is the latest in a longer trend in Australian football of a deep disconnect between the governors and the governed.

From the National Club Identity Policy, to VAR, to the clamping-down on active support, the game Down Under has been in regular battle with itself as various governing bodies have pulled in one direction while players and fans have often pulled in another.

In light of that history, it is perhaps no surprise that there has been such powerful backlash to the move: it is not simply this, but the accumulation of moments like this, which has pushed the football community to the edge of its patience.

What can Australian football learn from its own ‘European Super League’ moment?

While rage can be paralysing, it can also be powerful if channelled in the right ways.

Such was the outrage across European football last year that, in the space of a few days, majority of the ESL’s founding clubs withdrew their support, with the entire enterprise all but collapsing after backlash from fans, players, non-involved clubs, broadcasters, and sponsors.

More importantly, perhaps, the mobilisation of fan emotion also led to the establishment of an independent fan-led review into English football governance, which aimed to examine “ways of improving the governance, ownership and financial sustainability of clubs in the football pyramid, building on the strengths and benefits that our great game already provides the nation.”

“To make fans in this country, the game is now almost unrecognisable from a few decades ago,” the introduction to the review reads.

“Season after season, year after year, football fans demonstrate unwavering loyalty and passion by sticking by their clubs. But their loyalty is being abused by a small number of individuals who wield an incredible amount of power and influence.

“If the past year has taught us anything, it’s that football is nothing without its fans. These owners should remember that they are only temporary custodians of their clubs, and they forget fans at their peril.”

There were a number of key findings that came from the review, including (but not limited to) the need for an independent regulator, greater oversight of governance and ownership, and real-time financial monitoring.

The review also identified capability tests for owners versus directors of football clubs and a minimum baseline of engagement with supporters such as fan forums, fan-elected club directors, and even independent shadow boards of fans who are consulted on all off-pitch matters.

There are many lessons Australian football can take from this review, but there are two in particular that stand out.

The first is the need for a truly independent board of governance.

Currently, the APL board is made up of six individuals: the chairs of Sydney FC, Western Sydney Wanderers, Brisbane Roar, and Melbourne City, in addition to a representative from Football Australia and Silver Lake, the private equity firm who invested a reported $140 million into the league last year.

No other clubs are represented at this level and therefore have no formal decision-making power.

This imbalance has been made clear this week as representatives from some non-board-member clubs like Perth Glory, Wellington Phoenix, and Western United have all distanced themselves the decisions that were seemingly made without them.

Despite the fact that the A-Leagues are “owned” by all 13 clubs, eight of them do not appear to have a seat at their own table.

The resignation of Melbourne Victory chairman Anthony Di Pietro on Tuesday night illustrated the problem of the current board structure in that its chairs are the servants of two masters: the collective league and their own individual clubs.

Sometimes, as the grand final situation shows, those two responsibilities pull in opposite directions.

What, then, is an individual in such a position to do? As the fan-led review recommends, one solution is establishing an independent board structure where competing or vested interests cannot occur in the first place.

The second major takeaway is the need for fans to have a structural role in deciding the future of the sport.

Currently, active fan groups in the A-Leagues only have an informal, ad hoc relationship with their clubs. Lines of communication are open only as far as clubs themselves want them to be, with the power dynamic tilted almost entirely in the clubs’ favour.

While monthly meetings with fan leadership groups are common to plan logistics around games, such as tifo displays, transport, and security, there is no formalised position for fans within clubs or leagues themselves that enables them to have a voice or a vote in whatever they want to do.

This is why one of the only actions these fan groups can take when confronted by something they disagree with is making highly visible gestures such as protest banners and walkouts from games, understanding that the optics of an empty or quiet stadium could likely do more financial damage than any influence they currently have internally.

The same is true for players, with their only representation coming through their organised union, Professional Footballers Australia (PFA).

The public criticism from players such as Socceroo Craig Goodwin and Matilda Remy Siemsen this week have further highlighted the powerlessness of football’s primary stakeholder in these larger dynamics.

As the review suggests, creating a structural space for fans at governance level — either a position on existing boards or establishing “shadow boards” filled by elected fan leaders who have oversight and veto/voting power — would not only require decision-makers to genuinely and formally consult with fans, but it would also set Australian football apart from almost every other football nation in demonstrating that fans are truly central to decision-making, as is so often used in PR rhetoric, but rarely evidenced in the internal structures themselves.

When contacted by the ABC, the PFA echoed these sentiments.

“Following Monday’s announcement we have sought, and continue to seek, the views of our members across the A-Leagues on the decision,” PFA Co-Chief Executive Beau Busch said.

“Players have a deep understanding of the commercial needs of the professional game; however, their relationship with the fans is what sits at the heart of their love for the sport.

“Other domestic sporting codes, and overseas leagues, have encountered these challenges and illustrated the need for building a deep cultural commitment to engagement with those most impacted by decisions.

“The opportunity for Australian football is to be the first to build an effective response and embed the voices of fans and players in decisions that impact them going forward.

“This can only lead to better outcomes for Australian football.”

However, here is where a central dilemma rests. From the APL’s perspective, active fan groups — the ones who bring the traditional colour and noise of football to the sport — are no longer the primary focus of their growth strategy.

Instead, as the grand final decision suggests, they are looking beyond what they already have, making moves that they believe will appeal to a much bigger audience of casual observers (the ones who get on board with the Socceroos and Matildas every four years, but who fade from view in between) to try and turn them into the kinds of fans who come every week.

This is the underlying intention beneath the APL’s “Festival of Football”, which will accompany their Sydney-based grand finals.

It’s a festival that will contain “a range of other football-related events and activities,” including potential men’s and women’s A-League All Stars games played against visiting overseas clubs, with the success of previous showpiece events such as the All Stars v Barcelona friendly and the Sydney Super Cup earlier this year a testament to the ability for these marquee events to attract these more casual fans.

One of the APL’s many challenges, then, is finding the right balance between these two things: appealing to the mainstream Australian fan, where there is theoretically more money to be made, while still maintaining the integrity and spirit of the game that rusted-on traditionalists cherish.

The more difficult question to answer, perhaps, is whether they are able to be balanced at all.

The European Super League collapsed in the space of a week, its house of cards scattered by the winds of rage. Only time will tell whether the A-Leagues’ grand final proposal will do the same.