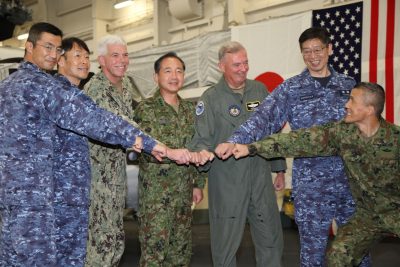 Realist international relations scholars predicted that after the Cold War Japan would revert to its ’normal’ position in the global hierarchy of great powers. In a seminal 1993 article, Kenneth Waltz asserted that ‘much in Japan’s institutions and behaviour supports the proposition that it will once again take its place among the great powers’.

According to most realist theorists, this entailed the reacquisition of archetypical great power military capabilities and an independent nuclear deterrent. But after decades passed and this prediction failed to eventuate, Japan specialists searched for explanations. They settled on Japan’s national identity as a ‘global civilian power’ and its ‘nuclear allergy’ — a consequence of the atomic bombings of World War II.

In his new book, leading scholar on Japanese security policy Christopher Hughes characterised Japan as a ‘global’ military power. He claims that ‘Japan is demonstrating all the indicators of becoming a more capable military actor and of going not just regional but also global in its military profile’. –

No claim to be a global military power is credible without the requisite defence capabilities. Hughes’ previous work tracked the steady remilitarisation of Japan. This began in the 1950s, when the Japan Self-Defense Forces were established and continued with periods of acceleration under former prime ministers Yasuhiro Nakasone, Junichiro Koizumi and Shinzo Abe.

Koizumi explicitly spoke of becoming a ‘normal’ country — implying that not being a great power was a condition of abnormality to be remedied. Abe certainly believed this when he affirmed that ‘Japan will never become a tier two country’. Under the ‘Abe doctrine’, Hughes argues that the process is reaching fruition.

Japan appears to be transforming into something more like the normal great power that realists predicted decades ago. The country has acquired many necessary accoutrements of typical great powers. The increased centralisation of security policy and the establishment of a National Security Council and National Security Advisor emulate the organisational structure and procedures of other great powers.

Japan has restructured its defence architecture and stated it will build a Multi-Domain Defense Force that will allow it to respond to threats from land, sea, air, space, cyberspace and the electromagnetic spectrum. It has also sought to augment its military capabilities with the creation of an Amphibious Rapid Deployment Brigade, the retrofitting of its helicopter destroyers to take on fixed wing aircraft and increases in submarine, destroyer and air defence and strike capabilities.

Japanese policymakers have sought to eliminate constraints on the employment of such capabilities. The 2016 Peace and Security Legislation permits collective defence alongside allies and partners in several — albeit narrowly circumscribed — contingencies. The loosening of arms exports controls and proposed increase of the national defence budget to 2 per cent of GDP over time also signal paradigmatic shifts in Japan’s security posture.

Added to this is the emerging global dimension to Japan’s strategic policy. In addition to galvanising its defence alliance with the United States, Tokyo has built an impressive global network of strategic partners ranging from Australia, India and the Philippines in the Indo-Pacific to France and the United Kingdom in Europe, along with an institutional partnership with NATO.

Japan’s Maritime Self-Defense Forces have also travelled further afield on military deployments across the Indo-Pacific and have established an overseas military base in the Horn of Africa. Japan has previously sent military forces on various peace keeping and anti-piracy operations and provided support for the US military intervention in Afghanistan.

While many observers may baulk at placing Japan in the same category as global military powers such as the United Kingdom and France — let alone the United States — Japan is going global with its military aspirations.

What makes developments in this direction more striking is the contrast with its prior strategic posture. Japan previously banned international arms exports, had a strict ceiling on its defence budget (1 per cent of GDP) and had no international defence partners outside of the United States. Japanese military forces were confined to defending Japanese national territory and had no global presence.

Hughes adopts the role of agent provocateur by encouraging readers to think more critically about how Japan’s defence posture and military capabilities are transforming. But there is a twist to Hughes’ apparent characterisation of a global military power. He contends that most of Japan’s globally orientated activities serve the purpose of drawing global allies and partners closer to its primary objective of homeland defence. If the price to pay for this is a more active contribution, it seems to be one that Tokyo is willing to pay.

Other countries view a better armed and more globally active Japan through different lenses. Supporters such as the United States and Australia welcome greater defence contributions from Japan. Yet China — which is in the midst of its own comprehensive military expansion — views any increase in Japan’s capabilities negatively.

Japan is clearly not yet a global military power in the way that the United States, United Kingdom or France are. The absence of offensive force projection capabilities such as strike aircraft carriers or long-range bombers and nuclear arms nominally disqualify it from this rank.

Despite its expanding horizons, Japan’s global military footprint remains limited so it can only be considered an incomplete great power.

How one characterises the nature of Japan’s power is not immaterial to policy. Hughes’ thought-provoking intervention in the debate challenges some of the entrenched assumptions and political euphemisms prevailing in current discourse.

Thomas Wilkins is a Senior Lecturer in the Department of Government and International Relations at the University of Sydney and a Senior Fellow at the Australian Strategic Policy Institute (ASPI).