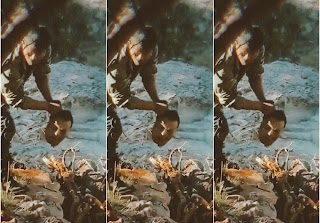 Several gunmen from the Jalisco New Generation Cartel show themselves on film throwing the dismembered human remains of a fallen Cartel de Sinaloa enforcer into the fire.

The video taken in the state of Zacatecas appeared online and just as quickly vanished. Restrictions on Twitter ensured that it circulated on its platform for a minimal amount of time.

What follows within this broadcast is the deadpan macabre humor of armed enforcers after having overtaken their enemies in a firefight.