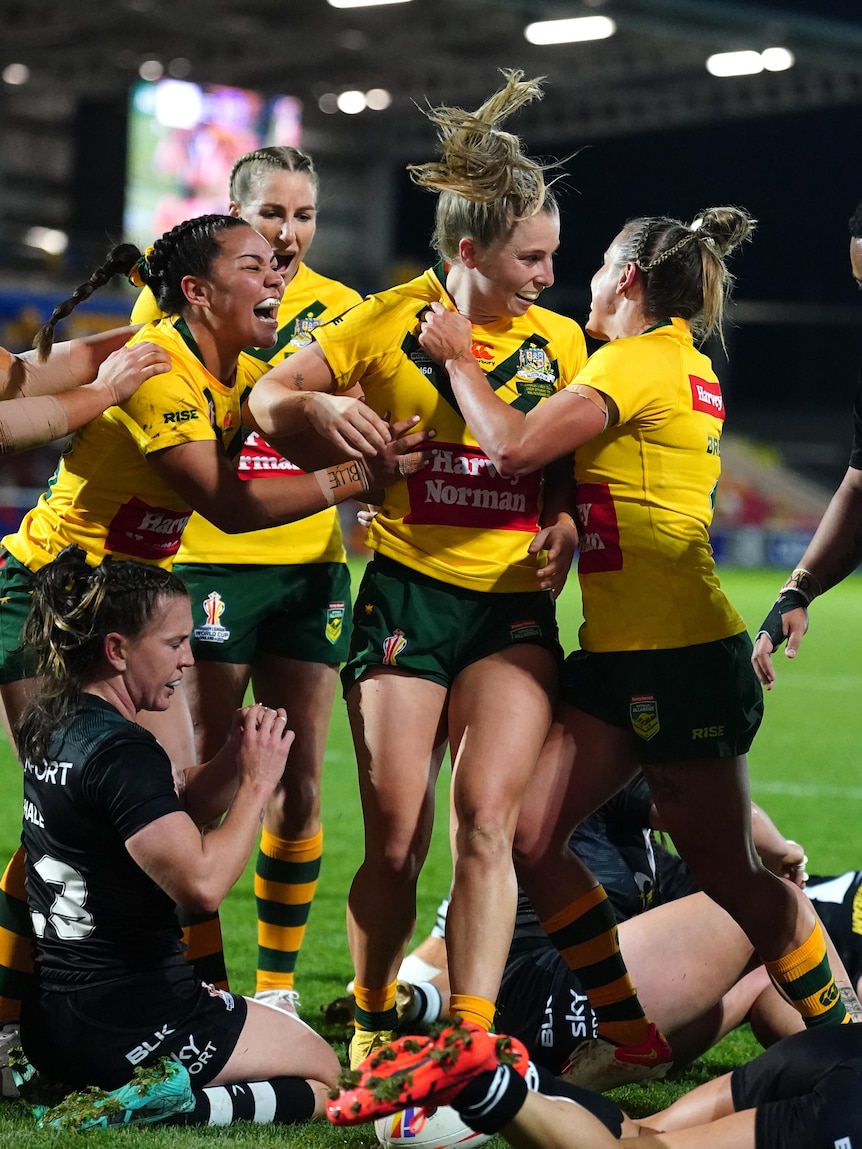 The Jillaroos have edged rivals New Zealand 10-8 in their final group game at the Rugby League World Cup, but their performance was a far cry from the dominant victory that was expected by some.

After outscoring Cook Islands and France 166-0 across their first two games, Australia faced a brutal test in the rematch of the 2017 World Cup final against the Kiwi Ferns.

Not only did they concede their first try of the tournament, they also struggled in attack, completing only 64 per cent of their sets.

But coming off their cruisy victories to start the tournament, Jillaroos coach Brad Donald said it was good for his side to get a proper contest before the knockout stages.

“We needed that game. We’ll get better from that,” he told Fox Sports ahead of a semifinal against Papua New Guinea.

For a team that had scored more than a point a minute coming into the match, they were clearly rattled early by intense New Zealand defence, making 10 errors in the first half alone.

“[The Jillaroos] looked like they were a bit daunted by the fact they hadn’t scored. They just needed to stay patient.

“Our attack was definitely a bit clunky with the pressure the New Zealand defence put on us.”

It was a sloppy start from the Jillaroos, who completed just 14 of 23 sets in the first half.

One of the crucial handling errors came from captain Ali Brigginshaw, who came within a fingernail of opening the scoring only to lose the ball over the line.

But halves partner Tarryn Aiken made no such mistake at the end of her own jinking run close to the line in the 20th minute, with Brigginshaw adding the extras from just to the side of the uprights.

And while a conversion like that may seem like a foregone conclusion, the Kiwi Ferns proved soon after that is not always the case.

Halfback Raecene McGregor’s grubber bounced perfectly over Aiken’s head and Apii Nicholls gathered and grounded next to the right of the posts, marking the first try Australia conceded in the tournament.

But prop Brianna Clark could not match the deft touch of her teammates, belting her conversion attempt into the post to allow the Jillaroos to maintain a slim 6-4 lead at half-time, which would prove the difference in a match where points were at a premium.

Trailing for the first time at the World Cup, Australia aimed up in defence, pinning New Zealand deep in their own half before eventually finding point via their elite back line, although there was some doubt about Jess Sergis’s final pass for Julia Robinson’s 62nd-minute try.

With neither of the second-half tries converted, Clark’s miss proved the difference as Australia held on to top Group B.

Australia takes on PNG on Tuesday morning (AEDT), before New Zealand meets England in the other semi.