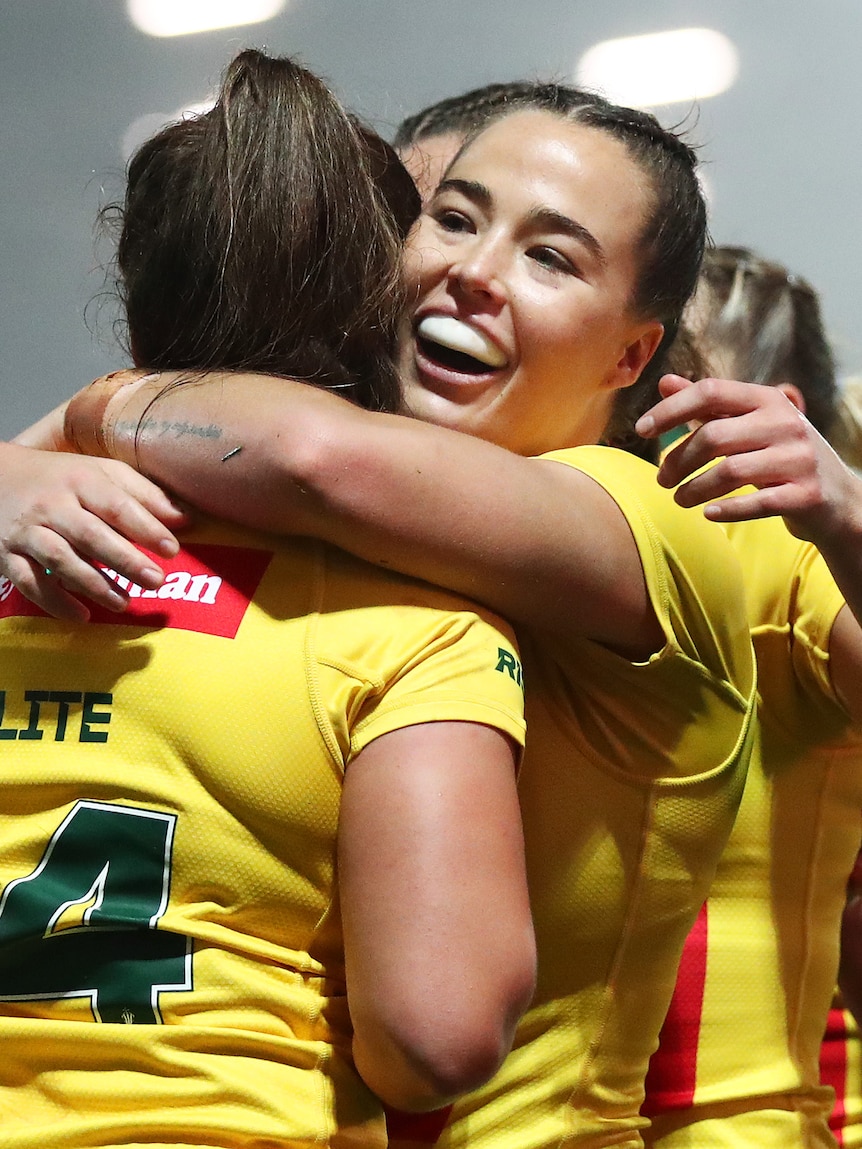 Australia has taken care of business against Papua New Guinea, reaching the World Cup final and continuing the quest for a third straight title.

Fullback Emma Tonegato and centre Isabelle Kelly both nabbed hat-tricks in the 82-0 demolition, with Tonegato named player of the match as she pushed her case to start in the final with a masterful performance.

But the rugby sevens Olympic gold medallist is not taking anything for granted, saying she has “got to be selected in the team first”, before she can start thinking too hard about the final on Sunday morning (AEDT).

Utility Lauren Brown was also sensational after being named in the halves for the first time, with Evania Pelite starring in multiple positions across the park.

It leaves Jillaroos coach Brad Donald with some tough decisions to make.

Half Tarryn Aiken, winger Julia Robinson, and forwards Shannon Mato, Kezie Apps, Simaima Taufa, Kennedy Cherrington and Caitlan Johnston were rested, with Donald confirming after the match that they would all play in the final.

But the exact make-up of the 10 players who join them in the side to face New Zealand, who beat England 20-6 in the second semi, remains up in the air.

Tonegato was only added to the World Cup squad after Tamika Upton pulled out, but has been one of the Jillaroos’ best all tournament and is a good chance to usurp Sam Bremner for the starting fullback role.

Meanwhile, Brown orchestrated a first half that finished 40-0 in Australia’s favour and will be hard to keep out of the starting line-up in either the halves or dummy-half role.

It is a good problem to have for Donald, who said he had “copped a bit of grief” for his selections throughout the tournament.

“We might have to play two fullbacks and two hookers and two [sets of] halves,” he said.

His comments came after 10 of his players, including every member of his back five, crossed the line against the Orchids.

After what Tonegato dubbed a “scrappy” start, Jillaroos hooker Keeley Davis started the scoring when she burrowed over in the 10th minute and the team never looked back.

Kelly had her hat-trick by half-time, with Shaylee Bent, Pelite, Shenae Ciesiolka and Olivia Kernick getting in on the act to make it 40-0 at the break.

Kelly turned supplier when she set up Roosters teammate Jess Sergis off the bench to kick things off in the second half, after which Ciesiolka finished off her brace, veteran prop Tallisha Harden crashed over, Tonegato ran in three and Jaime Chapman went 100 metres to score.

Chapman’s effort came on the back of the only period of prolonged defence for the Jillaroos all night, as the Orchids finally got some possession close to the line but could not convert.

The crowd was perhaps at its most vocal as PNG peppered the line, and Donald said, while he was proud of his defence for keeping a clean sheet, even part of him wanted to see the opponents break the line.

“It’s bittersweet because we love the Orchids and we love what they’ve been able to do,” he said.

Look back at Australia’s drubbing of PNG in our live blog.

I’ll see you on the weekend

The women’s final starts at 12:15am Sunday AEDT. And will be against either New Zealand or England, as the first match in a double header with the men’s final.

I’ll see you then!

The Jillaroos are into the Rugby League World Cup final

For the fourth straight time, Australia will play in the final of the women’s World Cup after this brutal performance against PNG.

It was only the first few minutes that were sloppy; after that it was everything you’d hope for from a Jillaroos drubbing.

Emma Tonegato is named player of the match, but it could have been her, Evania Pelite or Lauren Brown really.

This game is coming to an unfortunate end, with an Orchids player down in back play.

Good grief! I thought Shae Yvonne de la Cruz might go over in the corner, but then Jaime Chapman came across like a bullet and dumped her into the stands.

As the score reaches 82-0, the Jillaroos have scored at better than a point a minute for the second time in this tournament, after their 92-0 win over France in the second group game of the tournament.

Emma Tonegato has a hat-trick

The Jillaroos just put it through the hands out to the left until they found someone in a bit of space, and it was Emma Tonegato, who helps herself to a third try on the night.

Ali Brigginshaw chips over for Broncos teammates Jaime Chapman and Shenae Ciesiolka, but the ball bounces harmlessly into the latter’s hands without much pace.

Oh no. Isabelle Kelly has been horrifically wishboned in a tackle.

And Emily Veivers, who left the field injured earlier, has left a tackle on Shenae Ciesiolka clutching her left shoulder.

But the Jillaroos have finally kicked from inside their own half. A victory of sorts for PNG.

Looks like Lauren Brown is off the field, because Brigginshaw has taken over the kicking.

The Jillaroos run it on the last, but cant come up with anything from 30 metres out. And PNG gets a penalty to start their set. Can they work their way into position again?

After all that attack from PNG, all that defence from the Jillaroos, Chapman skips out of dummy half, breaks through a one-on-one with Lilah Malabag and strides out for her first try of the night. Brutal for the Orchids.

The Jillaroos are defending like Brad Donald told them they’re walking home if they get scored on.

And they keep them out. Just.

Therese Aiton thought she had gone over under the posts, but she was held up. And the video ref rules she kept possession. Not sure about that; looked like a knock-on to me.

And the Aussies are penalised. So the pressure will keep coming from the Orchids.

The crowd rises as the Orchids pressure the Jillaroos’ line.

Lilah Malabag grubbers through for winger Anika Butler, and Jess Sergis only just gets there in time to knock it dead.

Every non-Aussie fan, and maybe even a few of the Jillaroos diehards, are cheering for a PNG try here.

PNG will get another shot after Yasmin Clydsdale knocks on while playing the ball just over halfway.

The Orchids finally regather a short kick-off, with Shellie Long going low and hard through the middle.

Can they mount an attack here?

Elsie Albert does her best through the middle, but the set dies late out on the right.

Tonegato gets herself another one

The fullback had Chapman and Ciesiolka outside her, but put on a swerve and a turn of pace to get through the defensive line and over the tryline for her second.

I thought it was nuts that she wasn’t in this squad originally, and equally odd that she hasn’t been a regular starter through the tournament, but she’s playing herself into a spot in the final here.

Gloria Kaupa gets pinged for a hair pull on Isabelle Kelly.

So the Jillaroos are on the attack again.

Jaime Chapman made a break down the right and had Shenae Ciesiolka unmarked on her right for what would’ve been her hat-trick, but Chapman looked away from her Broncos teammate.

She chose to pass back inside to Sam Bremner, but it was a low ball and the fullback couldn’t handle. And even if she had, Elsie Albert was absolutely on her hammer.

Evania Pelite gives one back to her former rugby sevens teammate, breaking down the left and finding the superstar fullback on the inside.

Tonegato is the ninth try-scorer for the Jillaroos tonight.

Big Tallisha Harden gets one

After five or six Orchids defenders were attracted to a run from centre Jaime Chapman, who’s had one of her quieter nights of the World Cup tonight, veteran prop Tallisha Harden ran a strong line just to the right of the posts to score Australia’s third of the half.