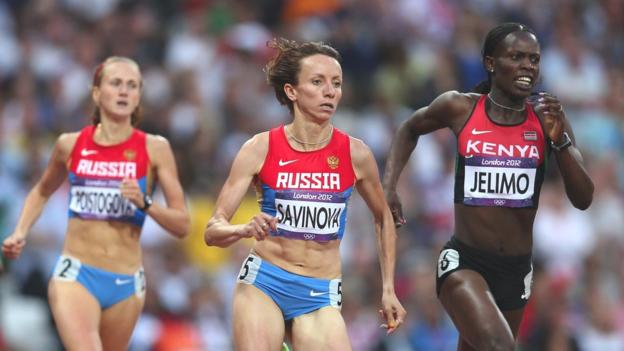 Kenya’s Pamela Jelimo has described the receipt of an Olympic medal as “painful” after her London 2012 bronze arrived a decade after competing in the 800m final.

The 2008 Olympic champion was upgraded from fourth to third in 2017 after the gold won by Russia’s Mariya Savinova was taken away because of a doping infraction.

Jelimo did not receive her medal in front of a packed crowd in the English capital, instead she had to settle for a museum in the Kenyan capital of Nairobi this week.

“It’s so painful to wait this long to receive a medal,” Jelimo told BBC Sport Africa.

“Doping is a menace that has cost me a lot of opportunities in both winning bonuses and in promotions at my Kenya Police workplace where we have targets in international competitions.”

Kenya is currently amidst a doping crisis, to such extent it feared a ban from governing global body World Athletics owing to its tally of 55 banned athletes.

But the country was itself a victim of doping from Jelimo’s race in August 2012.

Savinova won the race on the night but has since being found guilty of doping and issued with an annulment of all results between July 2010 and August 2013.

Wearing a ceremonial national team track suit on Wednesday, a teary Jelimo watched as her Olympic final in London was played on a projector during the medal reallocation ceremony.

Despite the long wait and the sterile atmosphere of a museum against a full stadium, Jelimo – now 33 – did manage to find some positives as she watched with her family, including her mother who was also overcome by emotion.

“My children can now watch me on TV as I receive the bronze medal – this is like a dream,” said Jelimo.

“Initially I didn’t believe it when I heard the good news. It’s truly a dream of every athlete to win a medal in the Olympics and I’m honoured to have my parents accompany me and share this joy.”

Aged 18, Jelimo became the first Kenyan woman to win an Olympic title when she stormed to a surprise victory at the 2008 Beijing Games in a world junior record of 1:54:01, a time that is still the third best in history.

Savinova’s ban meant another Kenyan, former world 800m champion Janeth Jepkosgei, was upgraded from 9th to 8th in a race ultimately won by Caster Semenya, with the South African having finished second.

Calls to run clean dominated speeches with the National Olympics of Kenya president and International Olympic Committee member Paul Tergat – who led the ceremony – adding in his voice.

“Our country is smarting from a near-catastrophic ban for increased doping among our athletes,” said Tergat.

He was referring to the news late last month that Kenya had avoided a World Athletics ban after the government committed to spend $5m (£4.83m) a year for the next five years to combat doping by funding more personnel, tests, investigations and educational programmes.

The Athletics Integrity Unit (AIU), which has provisionally suspended a further eight Kenyans on top of the 55 already banned, will work closely with Kenya to implement the plan following what the head of World Athletics called the country’s “escalating problem”.

“Over the course of one year, 40% of all the positives recorded [in doping tests] in global athletics are in Kenya,” said World Athletics president Lord Coe.

With Kenya one of seven countries deemed a ‘Category A’ federation – the highest doping risk – former athletics star Tergat took the chance to remind his nation’s athletes of the battle ahead.

Cases have become so widespread that Kenya’s Sports Minister intends to criminalise doping in athletics in an intense bid to end the ongoing scourge.

“As we celebrate and congratulate Pamela for her well-earned bronze, may this ceremony serve to remind us of the great work ahead to rid our country of every doping and cheating practice in our sports,” said Tergat, who won two Olympic silvers in the 10,000m.

“The athletes we celebrate today should assume the mantle to champion clean sporting and anti-doping messages across Kenya with the backing from all of us.”

“Getting justice so many years later is not the same as finishing and celebrating the moment as the world watches on,” she said.

“Doping robs athletes of their most important moments and I hope all athletes can just compete fairly.”