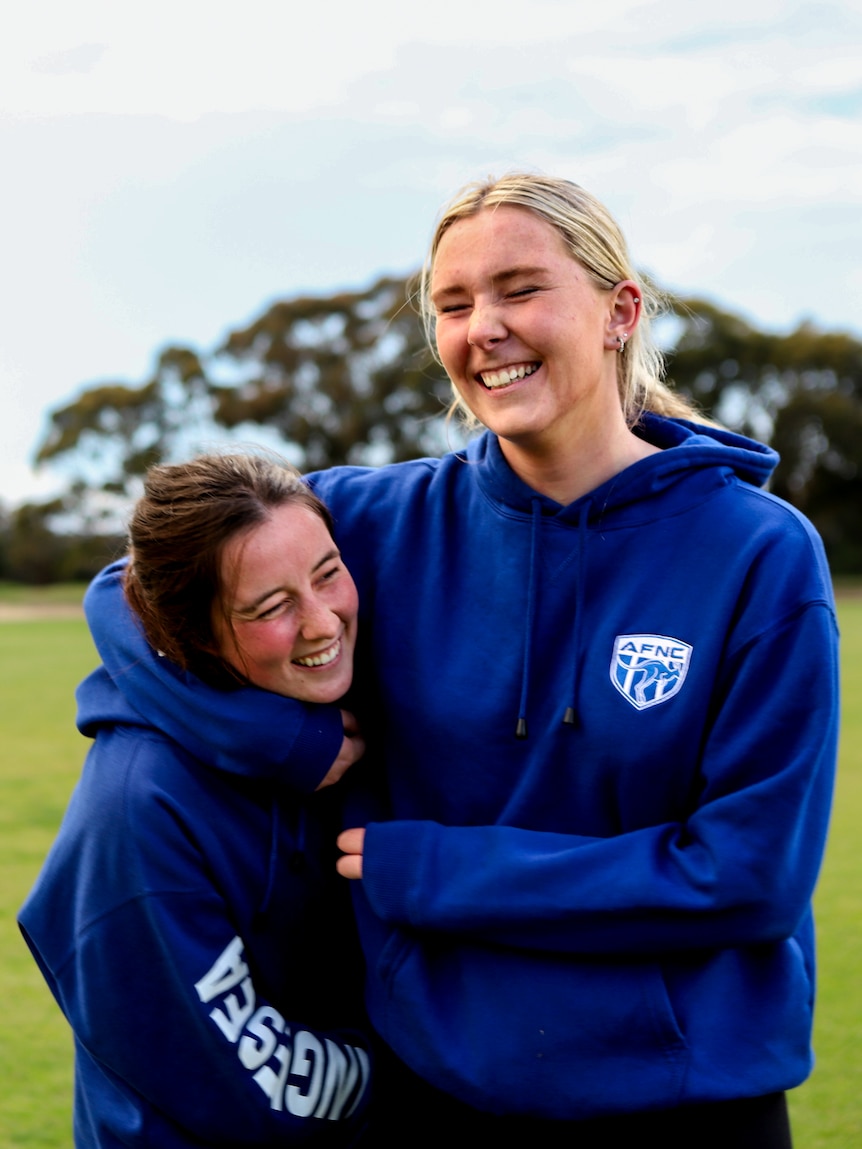 On a winter’s afternoon this year, Cassie Harrison jogs off the field of her coastal home footy ground to, as she cheerily terms it, “lighten the load”.

“There’re a few of us who have needed to breastfeed mid-game,” she says.

“You kind of just do what you need to do to keep playing.”

This might be one of the coolest football teams in Australia and nobody in Anglesea is taking it for granted.

For six decades, the small beachside community about 90 minutes’ drive south-west of Melbourne has fielded a men’s football team that, by Anglesea Football and Netball Club (AFNC) president Jamie Mackenzie’s reckoning, has “punched above its weight”.

The clubroom walls, adorned with pictures of AFL superstar Patrick Dangerfield as a bright-faced Anglesea junior, lend credibility to that.

But until recently it had never fielded a senior women’s side.

That absence was keenly felt by Jessie Shea. As a teenager, she played in the mixed football competition with her brother until the age of 14 when the league switched to boys-only.

Her brother could keep playing in the Anglesea juniors. She had to travel 20 minutes up the Great Ocean Road to play for Torquay.

“It was pretty tough because Torquay are Anglesea’s biggest rivals,” Jessie says.

“I felt like a bit of a traitor. I copped a bit for that.”

Jessie no longer has to worry about small-town disloyalty.

The 18-year-old stands proudly as not only a member of the Anglesea women’s football seniors but a 2022 premiership-winning player at that.

It started in 2019 when three local women knocked on, or perhaps down, Jamie Mackenzie’s door.

They insisted AFNC should have its own women’s football team.

Mr Mackenzie wanted to support the idea, but was circumspect.

“We weren’t scared but we just didn’t want it to be a one-hit wonder. It had to be sustainable,” he says.

Any fears were quickly allayed. The women, Cassie Harrison among them, had pre-empted every concern.

They pulled together an initial list of more than 30 players. They had a team manager lined up and a physio.

On the club’s first casual kickabout training, 50 women between the ages of 18 and 40 showed up. Some were surf lifesavers, others supermarket workers.

Alongside a supportive mix of local accountants, plumbers and estate agents, the team managed to hustle up a unique sponsor — Melbourne band King Gizzard and the Lizard Wizard.

Described this month as a “pretty-much-every-genre rock band” in The New Yorker magazine, “the Gizz” performs to tens of thousands of people on stages around the world.

And now they’re on the guernseys of the Anglesea women’s football team.

The association isn’t merely symbolic or for novelty.

Before helping form the wildly prolific ARIA award-winning band, frontman Stu Mackenzie was a talented country footballer who grew up in Anglesea.

An ACL injury curtailed his playing career but a small photo in a corridor near the club’s toilets lists him as the captain of a 2004 juniors side that included 14-year-old Patrick Dangerfield.

With the band ascending to international fame and Stu Mackenzie related to club president Jamie Mackenzie, the band agreed to a specific sponsorship agreement in support of the women’s team.

Keen-eyed members of the Gizzverse, the band’s dedicated online fanbase, recently picked up on the sponsorship and the club has begun receiving requests for women’s football guernseys from fans in the United States and Canada.

And locals hope the connection will one day extend to the band performing at the Anglesea football ground.

“Oh my god. King Gizzard and the Lizard Wizard plastered across our back? How bloody cool is that?” Cassie Harrison laughs.

Seasons change, so too culture

The pandemic may have cruelled some initial momentum, but in their first full season this year, Anglesea took home the 2022 senior female division three premiership.

At the team’s first preseason training since the flag, the smell of sausages and onions waft on the sea breeze and the mood is lively.

Team manager Jenny Lingham keeps watch, tongs in hand, from a barbecue next to the ground.

On game days, she might be found running the bar or in the canteen.

“My husband can’t believe how much footy I can watch,” Ms Lingham says.

The Anglesea local had “dreamt about having a girls’ team for years” but even she was taken aback by the community response.

“There’s a real buzz around the club having the girls here,” she says.

“Every time I go into the supermarket, the older men ask how the girls are going.

“The girls have brought a really positive culture to the club.”

That idea of country football culture, for so long a largely fixed concept, is now thrillingly malleable.

“You get really insular being just a men’s football club,” Mr Mackenzie says.

“[The women] just want to be a part of the whole show, the Thursday night meals, all the stuff we take for granted.

“It has really brought a whole different context to everything. Yeah, we’ve got more people now, but it’s greater diversity.

“It’s been one of the most significant things that has happened to our club.”

Community support for the team can be viewed through any number of data points — from the number of cars backed-up to the ground to watch Friday night games under lights, to the streamers and signs in local shop windows to mark the women’s premiership success.

Against the backdrop of a sixth AFLW finals series, there is also growing optimism Anglesea may soon be able to field an under-16 girls team.

“You’ve got the cultural effect, and that spreads in the community,” Mr Mackenzie says.

“It is just fantastic.”

As small towns grapple with how to keep young people in their community, Anglesea’s 18-year-old centre half-forward Nadia McCristal stands as testament to the potency of meaningful inclusion.

“I grew up in Anglesea my whole life,” she says.

“Without the team, I might have thought about going somewhere else but it’s probably keeping me here

“Nothing else really feels like it. I wouldn’t leave now.”

Asked if she plays for the coolest footy team in Australia, McCristal answers in a flash: