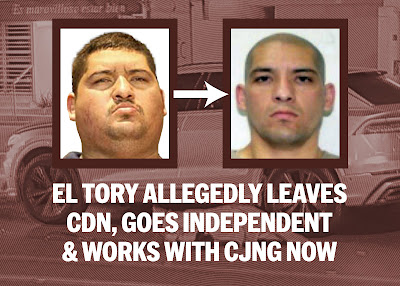 Warning: Some graphic images below this point.

The Man Hung From the Bridge

At approximately 6:00 am on November 11, 2022, a dead male was found hanging from a bridge on the toll road (Highway 85D) that connects the border city of Nuevo Laredo and the major metropolis of Monterrey. His body was found at kilometer 27, near the exit to Los Pilares, in the municipality of Ciénega de Flores, in the state of Nuevo Leon, marked on the map below. 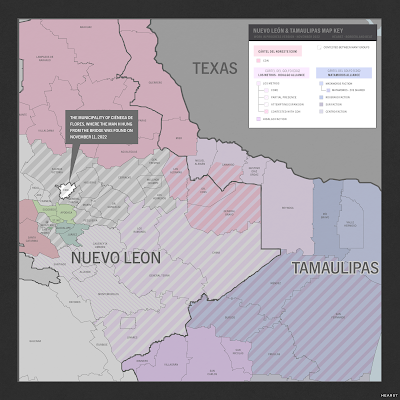 The motorists who spotted the body called the emergency phone line. Debate writes that municipal police officers were the first to arrive on scene. The male was hung upside down, with his hands bound behind his back. 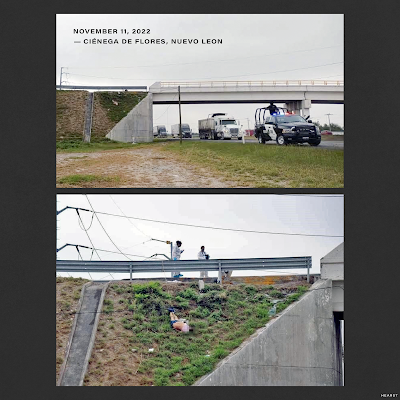 As officers approached the location where the rope was tied to the bridge’s metal railing, they noticed a white cardboard sign with a narco message.  He was dragged from the bridge to a slope nearby for the safety of motorists.

He was approximately 30 to 35 years old, bearded, with tattoos on his chest and arms, according to newspaper El Norte. He was wearing a pink shirt with jeans and blue boxers. His body showed signs of having been tortured prior to death. 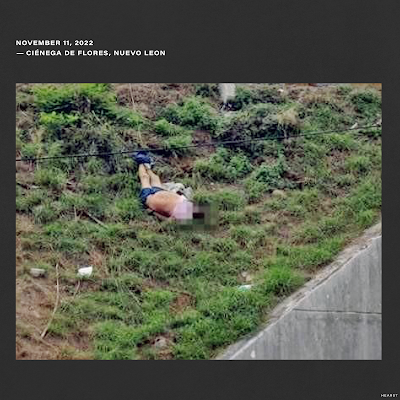 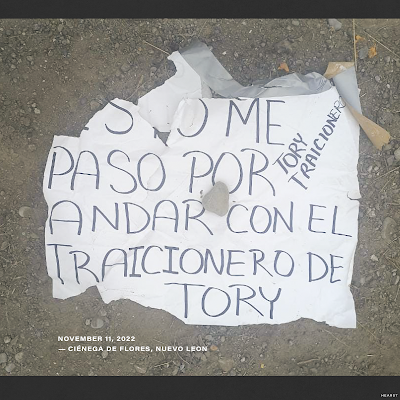 It reads as follows:

This is what happened to me for hanging out with the traitor Tory.

And in the margins:

So, who is this message directed at? The most famous El Tory in the Nuevo Leon area is Héctor Raúl Luna Luna, a longtime Northeast Cartel (Cártel del Noreste, CDN) member who has reigned as one of their top leaders for almost a decade now. 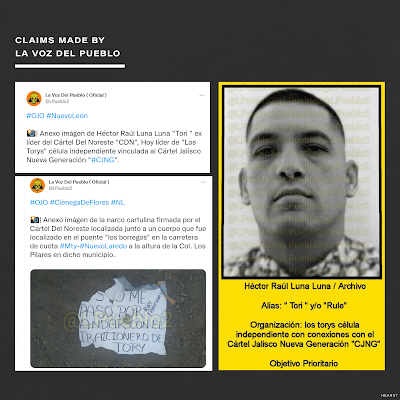 Well, why is he being called a traitor? The cartel news Twitter account La Voz del Pueblo alleges that just recently El Tory decided to leave CDN and he now leads his own independent group called “Los Torys”, who they say are “associated with the Cartel Jalisco Nueva Generacion.” 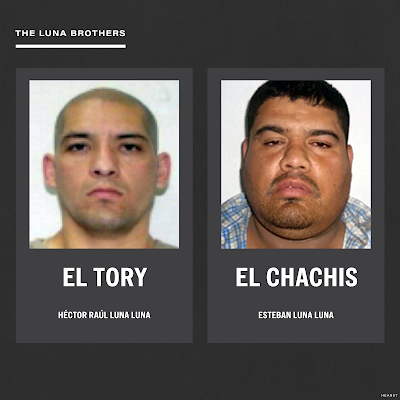 Now this, if true, would be major news, a huge development that could change the control and power balance of the whole region. But we must keep in mind that as of the writing of this story the only person who is claiming that El Tory left the group is the account La Voz del Pueblo, along with a few Twitter commenters.

The narco message itself is not signed as being from CDN. It is, instead, unsigned, leaving open the possibility that a local cartel group Tory had an agreement with grew unhappy with their arrangement and left the message as a sign of discontent.

It is also, of course, possible that the message is referring to a different, unrelated cartel member with the alias “El Tory.”

At 7:30 pm on November 12, just one day later, a man driving in western Monterrey was gunned down by two hitmen riding a motorcycle.

The man was allegedly driving a silver Audi SUV, with a Coahuila license, on the eastbound lane of Paseo de los Leones Avenue in the Leones neighborhood of the city when two men on a motorcycle drove in front of him. One of the men took out a firearm and shot into his vehicle, hitting him multiple times. 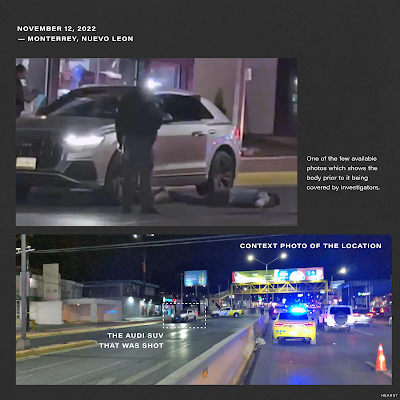 The Audi slid to a stop on the road and the injured vehicle driver attempted to run. He opened his car door and made it just one step away before one of the attackers shot him again, making him crumple to the ground and he ceased to move. 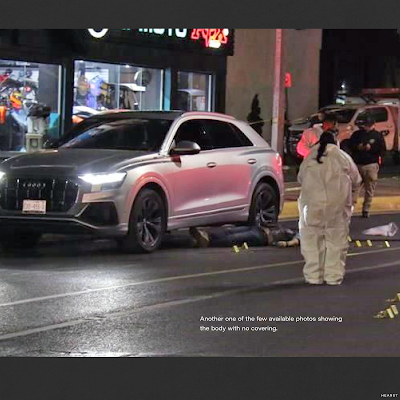 Police were called to the scene quickly after, however, the attackers had fled the area by the time they arrived. Two lanes of traffic had to be cordoned off by officers due to the location of the body. Forensic teams found on scene a man of medium build, with a beard, who was wearing a light blue shirt, jeans, beige tactical boots and a baseball cap. 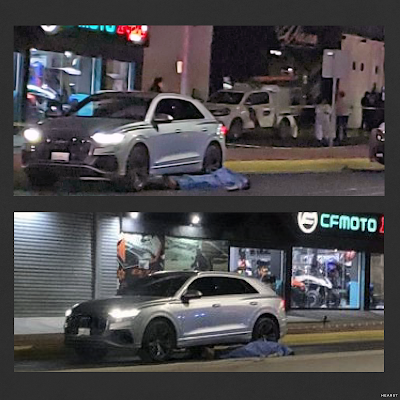 A bag was slung across his chest. Of note, certain styles of bags worn in this manner can sometimes indicate that the wearer is a drug dealer.

The victim’s vehicle had at least 7 distinct bullet holes, located between the windshield and the driver’s side window. Inside the vehicle, 2 hand grenades were found, undetonated. 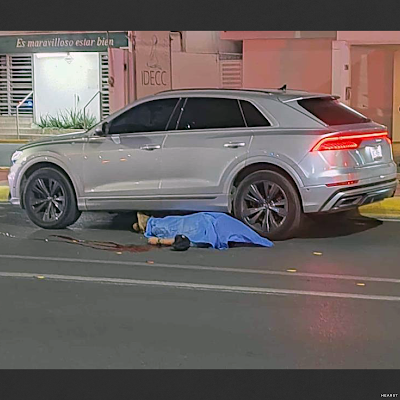 The identity of the attackers and the victim have not been released by authorities or newspapers as of the writing of this story. La Voz del Pueblo alleges that the attackers were hitmen from CDN and the victim was named Antonio, alias “Toño”, who they claim was a member of Los Torys.

Background on the State and El Tory

As some background context, the state of Nuevo León was originally under the control of the Gulf Cartel (Cártel del Golfo, CDG).

Beginning in 2003, the Sinaloa Cartel federation tried to contest the Gulf Cartel’s control over Nuevo León and the nearby city of Nuevo Laredo but the Gulf Cartel managed to retain control of the areas, in no small part due to the use of their armed wing, Los Zetas.

In the wake of this war, a truce emerged in 2007 between the CDG and Sinaloa Cartel federation. As a part of this truce, the plaza of Monterrey was formally given to the Beltran Leyva Organization (BLO). With cartel control of the area no longer under dispute, Monterrey was ruled by the leadership of BLO lieutenant Héctor Huerta Ríos, aliases “La Burra” and “El HH”, for a few years.

On March 23, 2009, La Burra was named as one of 37 most wanted cartel members in a list published by the Mexican government. He was arrested the day after the list’s publication.

Within a year of La Burra’s arrest, Los Zetas declared their independence from the Gulf Cartel, plunging Nuevo León into chaos as now the CDG, Los Zetas and the BLO were all fighting to control the state.

Then Los Zetas fractured. One of their splinter groups began evolving into what we not know as the Northeast Cartel (Cártel Del Noreste, CDN). Their leader for the Monterrey was the aforementioned Héctor Raúl Luna Luna, alias “El Tory”.

The CDG also began fracturing into independent factions. Both groups fracturing and the sharp decline in BLO power after Arturo was arrested in 2009 led to lessening of the violence -a brief semblance of stability emerged.

In June 2010, El Tory was arrested and brought before the press. He was soon after convicted and sentenced to serve 8 years in prison. 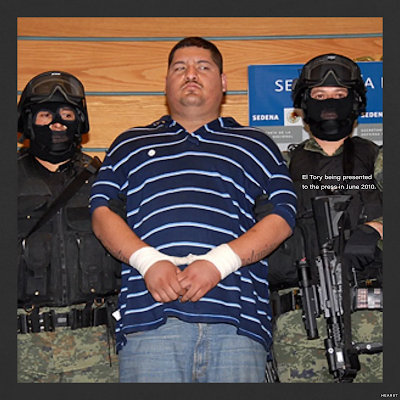 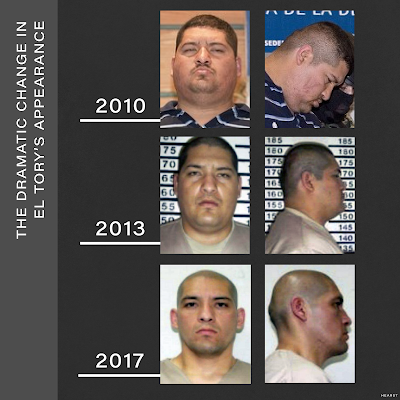 In late October 2018, El Tory was released from prison. After 8 years of being behind bars, El Tory came back to the streets of Monterrey with a vengeance.
CDN began a major campaign to take over all the CDG plazas located in the greater Monterrey area. He also aimed to get all the various independent groups around Monterrey to submit to paying a percent of their earnings to CDN or if they refused, be eliminated by CDN forces.
One of El Tory’s direct reports and top lieutenants was Rodolfo “’N”, aliases “El Mostro” and “Pomo”. According to La Verdad, both El Tory and El Mostro were said to have a direct working relationship with the overall leader of CDN at the time, El Huevo. 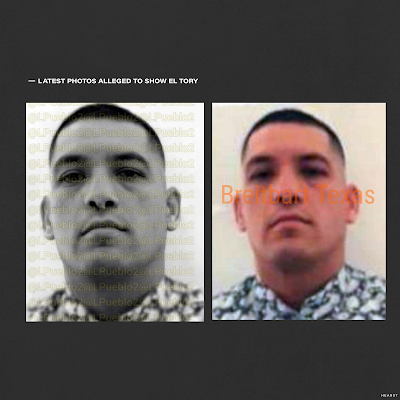 On January 1, 2020, El Mostro was arrested along with five other CDN members. His arrest came after a series of targeted operations organized by agents from the State Attorney General’s Office (FGE).
At the time of El Mostro’s arrest, El Tory was said to be hiding away from Monterrey and organizing operations from afar while he was laying low in the CDN stronghold city of Nuevo Laredo – which is located in the state of Tamaulipas.
Since the 2020 arrest of Tory’s lieutenant El Mostro, there’s been little news covering him. At least, up until now, when a single source is claiming that he has left CDN, started his own group, and allegedly associates with the CJNG.
There are many independent cartel groups working within the area of Monterrey who have been franchised by large cartel organizations. As example, the Cartel Independiente de Nuevo León, led by Joel Rodolfo Ramones Barba, alias “El Rodo”, is famously working for Sinaloa Cartel’s El Mayo.

The veracity of El Tory leaving is still up for debate but here is what we can be sure of: If a powerful CDN leader for Nuevo Leon split with CDN, and now associates with the CJNG, we will get more than one narco message and a shooting indicating this.

There will be more signs accompanying bloody executions and street shootouts and interrogation videos from both sides telling us more about the alleged split.