Malaysia gets a second shot at democratisation under Anwar 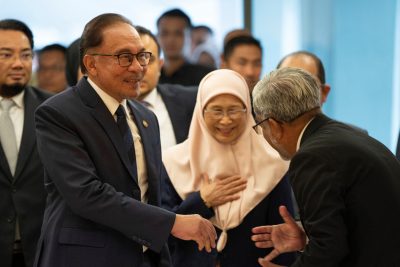 A big question in the wake of Malaysia’s 2018 election was whether the country had embarked upon a transition to democracy after the Barisan Nasional (BN) coalition’s first-ever election defeat.

Over decades of BN rule Malaysia became a textbook case of so-called competitive authoritarianism — a system where regime opponents are allowed to contest power, but on a playing field hopelessly stacked in favour of the incumbents thanks to their control of the legal system, the press and patronage.

When the reformist Pakatan Harapan coalition defeated BN in 2018, it looked like Malaysia might have followed in the footsteps of countries that experienced ‘democratisation through elections’, where upset victories by oppositions gave enough of a shock to the system to kick off democratic rule.

But one electoral swallow doesn’t a democratic spring make. Indeed, the 2018–2020 Pakatan government was paralysed from the start by ideological divisions between its progressive and conservative member parties — not to mention the deep personal rivalries among its leaders. It collapsed in a parliamentary coup in 2020 to make way for a conservative Perikatan Nasional government based on ethnic Malay parties, and Pakatan went into opposition under the leadership of the reformasi movement icon Anwar Ibrahim.

Anwar has dealt his way into the prime ministership after the election on 19 November, which delivered a hung parliament. Malaysia now gets a second go at economic and institutional reforms, as well as building a democracy that can survive in a society riven by deep divisions on race, religion, geography and class.

What’s certain is that the BN era is over, with its cornerstone party, the once-mighty UMNO, now only the fifth biggest in parliament. The collapse of its dominant-party rule, and the rise of a more fragmented political landscape in its place, has put Malaysia on the path already trodden by Indonesia towards a flawed but nonetheless real democracy, where corruption and abuses of power remain commonplace, but in the context of a fundamentally open and competitive system.

There’s a lot that could go wrong along the way. But the Malaysian system has taken the early steps down this road with equanimity. In a period of acute uncertainty and tension in the days after 19 November, the fact that the change of government proceeded without social unrest or incumbent attempts to delegitimise the result was encouraging — even though the role that Malaysia’s King played in Anwar’s ascent reflects increasing politicisation of the monarchy in the more fluid coalitional politics post-2018.

Another cause for caution about reform prospects is that Anwar secured power with the support of the rump of BN. The prime minister’s supporters are inclined to give him a pass for this, because the only way the Perikatan Nasional government would have been able to scrape back into office was in alliance with PAS — the increasingly strident Islamist party that more than doubled its seat count on 19 November.

With UMNO now sitting around the cabinet table with its erstwhile adversaries from Pakatan and PAS on the opposition benches, the success of the Anwar government will be defined by who it is denying power as much as what it is doing with its own.

Anwar remains a polarising figure at home. Yet his intellect and dissident credentials give him rare star power on the world stage. He will be mostly tied down with domestic problems but will be a credible and articulate spokesman not only for Malaysia, but for Southeast Asia and its interests when the opportunity arises. The temptation in the West is to think that Anwar’s liberal-mindedness leads him automatically to favour American designs for the region. But his foreign policy strategy will be shaped by interests, rather than values — and amid these interests nothing looms larger than the need to shore up jobs and investment in Malaysia’s highly trade-dependent economy.

In opposition, Anwar’s Pakatan Harapan coalition prevaricated on free trade, opposing Malaysia’s entry to the original US-led Trans-Pacific Partnership in 2016 and criticising its rebooted version, the CPTPP, which was ratified just before the election. The economic benefits of sticking with it are likely worth wearing accusations of a backflip, especially if United States eventually brings itself to return to the deal.

In any case, Malaysia still benefits from market-sceptic US trade policy, with the local semiconductor industry expecting a boost from Washington’s efforts to build China out of chip supply chains.

China is an important and growing source of Malaysian investment, and relations with Beijing will continue to be seen primarily through this prism. Anwar has talked of the need to deepen bilateral economic ties with Beijing — and has been more cautious in his comments about Xinjiang than one might expect from a former prisoner of conscience. As opposition leader he questioned the former government’s cooperation with Ericsson to build Malaysia’s 5G infrastructure over a cheaper option from Huawei, a decision his government is now revisiting.

There’s always the potential for a crisis in the South China Sea — where China’s spurious ‘nine-dash line’ overlaps with Malaysia’s exclusive economic zone. Under the new government, Malaysia will keep hedging between the United States and China in the knowledge that it has nothing to gain by too obviously aligning with either in their competition for influence in Southeast Asia.

What is certain is that the economy will be of immense political importance to Anwar’s political survival. He needs wins on the economy because he will be besieged from day one by demagogic attacks from the Malay-chauvinist and Islamist parties that it pushed into opposition — as well as face disenchantment from its own supporters when the inevitable compromises of accepting support from BN to govern puts a brake on institutional reform.

Liam Gammon is Research Fellow in the East Asian Bureau of Economic Research at The Australian National University.

This article is part of a series from East Asia Forum at the Crawford School in the ANU’s College of Asia and the Pacific.

This article was first published here in the Australian Financial Review.