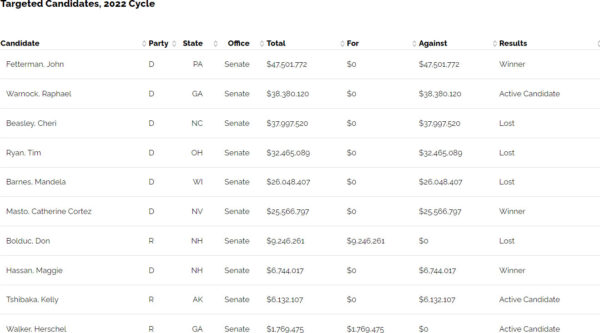 The now bankrupt cryptocurrency exchange FTX donated $2.5 million to the McConnell-influenced Senate Leadership Fund, a super PAC that withheld funding from or attacked a handful of America First, “MAGA” candidates for U.S. Senate. While the Senate Leadership Fund opted to cancel a critical $9 million in ads supporting Blake Masters in Arizona, it did donate to senators who voted to impeach former President Trump. A similar story played out in the U.S. House of Representatives, where soon to be House Speaker Kevin McCarthy (R-CA) used FTX funds to attack MAGA candidates in GOP primaries.

The Senate Leadership fund received $2.5 million from FTX for the 2021-22 cycle, according to records at Open Secrets.

In the most egregious example, the Senate Leadership Fund cancelled $10 million worth of ads supporting Blake Masters. The PAC opted not to spend a dime of its $250 million war chest on Masters, who lost a close race with incumbent Mark Kelly (D-AZ).

The Democrat-aligned Senate Majority PAC, however, — which received its own $3 million donation from FTX — spent $24 million attacking Masters. The PAC also spent a little over $3 million in support of Kelly, who already had a massive fundraising advantage over Masters.

Despite Democrats pumping $27 million into the race while McConnell stayed out of it entirely, Masters still only lost to Kelly by a narrow margin. The spending disparity coupled with the tight result have led a growing number of conservatives to conclude that McConnell was happy to lose the race.

In addition to abandoning Blake Masters, the Senate Leadership Fund spent a little over $6 million in support of Senator Lisa Murkowski (R-AK), a McConnell ally who voted to impeach Trump and backed Democrats on numerous key issues. The race between Murkowski and Trump-backed Kelly Tshibaka — who has stated that she will not support McConnell for GOP Senate leader if elected — has yet to be decided, though Murkowski holds a razor-close lead. The incumbent is favored to hold onto the seat as a result of the state’s new ranked-choice election system, however.

Conservatives and Trump supporters have questioned why McConnell would spend $6 million in a race that will be a Republican hold either way, while withholding funding from key races.

In terms of races where McConnell’s PAC did decide to spend money, a handful were already seen as likely Republican holds, such as North Carolina and Ohio. McConnell also opted to simply match Democrat spending in Nevada, a seat that Republican Adam Laxalt ending up losing by a very small margin.

In total, The Senate Leadership Fund raised a little bit north of $250 million in the 2021-22 cycle, according to FEC records. The PAC ended the cycle with a whopping $35 million in cash on-hand, however.