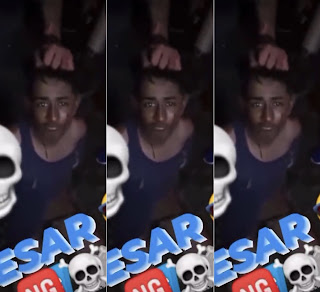 A captive male under duress has been coerced into sending out a communique on behalf of the murderous Jalisco New Generation Cartel (CJNG).

Within the first broadcast the doomed male’s voice breaks towards the end in anticipation of his inevitable demise.

The second video consists of his beheading with a large fixed blade knife at the hands of his captors.

Several emojis have been purposely placed across the screen in order to offset the algorithms that would automatically ban this video from circulating on social media platforms.

In addition the song ‘Clika Nostra’ by Mexican rap group Cartel de Santa plays through the execution. The overall theme of this upbeat anthem references a dangerous Northern Mexico mob who pays all thieves with brutal death.

Mr. Mencho and the Jalisco New Generation Cartel is the fucking boss here in the state of Michoacán and throughout all of Mexico. This will be the fate of everyone involved in bullshit.