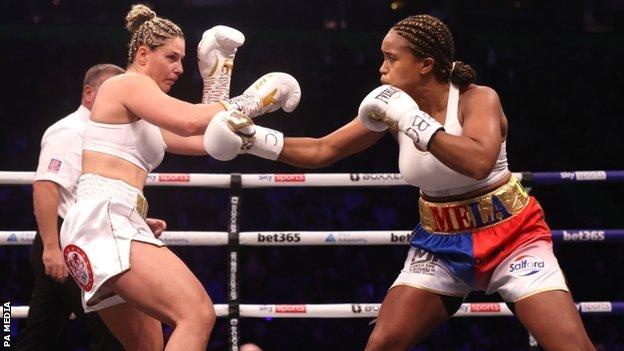 The Liverpudlian, 38, won her first world title in February and then unified the division in September.

And she capped a memorable year for herself and women’s boxing by claiming her third world title in nine months.

Great Britain’s first female Olympic boxer has now won 13 fights since turning professional in 2017, with two losses and one draw, while Dicaire slips to an 18-2 record.

It now seems hard to believe that Jonas had to banish thoughts of bringing her career to a premature end after suffering her first professional defeat by Viviane Obenauf in August 2018.

And even after rebuilding her career and being unable to take advantage of her first two shots at a world title, she says that just 12 months ago she didn’t know how she was going to become a world champion.

But she realised her dream in February by knocking out Chris Namus, before unifying the division in September with a unanimous points victory over Patricia Berghult.

That earned Jonas the chance to headline at a major venue for the first time as a professional and provide the latest spectacle in a thrilling period for women’s boxing.

A short drive down the M62 from Merseyside home, Jonas was given a rousing reception at Manchester’s AO Arena, and she responded by landing two shots in quick succession in the first round.

And Jonas continued to land the more accurate punches throughout, despite Dicaire occasionally opting for a more agricultural approach in a bid to throw the Briton off her game.

A scrappy second round saw Jonas catch Dicaire with a left hook, and although the Canadian tried to force the pace in the third, she walked onto a couple of solid lefts from Jonas.

Jonas’ jab helped keep Dicaire at range before the pair trades blows in a more expansive fifth round, with the Canadian perhaps getting the better of it.

But Jonas began to unload in the sixth, throwing more combinations and landing an uppercut as well as a right hook.

Several body shots in the seventh kept Jonas firmly on top and while Dicaire kept coming forward, Jonas continued to pick her off to end an unforgettable year on another high.