No place for the angry young man in Nepal’s democracy 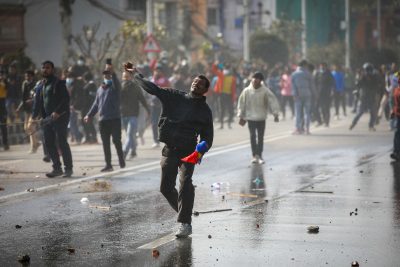 Nepal heads toward an election on 20 November 2022. This will be the second democratic election following the promulgation of its new constitution in 2015 — which provided a framework to institutionalise peace and the democratisation process.

If the upcoming polls proceed peacefully, as is most likely, Nepal will have completed four cycles of democratic elections, which is a chief indicators of stable peace. Two days after the election, on 22 November, Nepal will celebrate the 17th anniversary of the signing of its first peace agreement, signed in 2005.

Nepal’s peace process has received limited international attention despite its relative success. What international experts and peace scholars find puzzling about Nepal’s durable process is how a country with minimal resources and great complexities transformed violent conflict into stable peace.

To explain Nepal’s peace process, it is important to look at its history of armed insurgency. The insurgency was started by an ultra-leftist Maoist group in 1996, who demanded fundamental socio-economic and political transformations in Nepal. The movement amassed large rural support remarkably quickly.

A majority of Nepal’s rural population — who did not benefit from its post-1990 economic liberalisation — felt deprived. This pervasive dissatisfaction among the rural majority led to a ‘revolt from the margins’.

The response to this insurgent group helps to explain why Nepal’s peace process has remained durable for nearly two decades. Generally, it has been durable because it has facilitated power-sharing with the Maoists, who represented Nepal’s marginalised majority.

As part of Nepal’s peace process, the Maoists were brought into the democratic fold and obtained access to the government’s resources and power. The Maoists became ministers, members of parliament, government officials and occupied other influential positions. This power-sharing solved Nepal’s violent conflict to a great extent.

As Nepal celebrates the success of its peace process with the fourth consecutive democratic election, the question of whether its power-sharing approach is sufficient to sustain peace has emerged. A few trends observed in the lead-up to these upcoming elections raise strong doubts.

Nearly three decades after the Maoists’ armed rebellion was launched, a new generation of youths who are restless and dissatisfied with the present establishment in Nepal has emerged. They pose a significant challenge to the status quo.

Recently, some youth-led campaigns encouraged people to vote only for independent candidates, not those belonging to traditional political parties. Many potential voters seems to support their initiative. This is evidenced by the victory of independent candidate Balendra Shah in the May 2022 election for the mayor of Kathmandu.

Such a result was unthinkable in past elections. Nepal’s political parties have strong organisational structures across the country. In the past it was difficult for an independent candidate to beat a partisan candidate. The situation has now changed, with the possibility of more independent candidates winning in the upcoming election.

Another social media campaign known as ‘No, Not Again!’ which urged voters not to vote for the top leaders from mainstream parties, including the Maoists, has been trending on Twitter and other social media platforms. On 25 October 2022, Nepal’s Election Commission asked for the campaign to be closed down as such defamation of the candidates violated the election’s code of conduct.

It is still unclear who these campaigners are. This underground campaign is supposedly run by a young Kathmandu resident, who claims to represent the voice of the general voters.

The present political leadership is concerned about these emerging developments in the lead-up to the election. They argue that such targeted attacks against Nepal’s political parties and their leaders will weaken Nepal’s budding peace and democracy. A few leaders — including from the Maoist party — have publicly discredited these campaigns. Surprisingly, they have not been able to recognise that these reactions from the youths have emerged in response to the country’s core economic problems.

Even though there have been notable achievements in Nepal’s efforts to establish an inclusive democracy, the unemployment rate in the country remains high. Even more worrying is the increasing income gap between the rich and poor, which is considered an unavoidable outcome of the neoliberal economic system.

These economic problems, combined with the negative effects of climate change, have worsened the livelihood of millions of youths across the country. Their exposure to widely accessible online media means they are more aware of their plight than the Maoists youths were.

The current political parties have not satisfactorily focussed on the agendas of young people in the upcoming elections. The price of this misguided approach could be high. A growing number of frustrated youths could turn to radical outlets to express their grievances, which could undermine the peaceful democratic framework.

Nepal’s infant democracy could be in danger once again. Nepal’s experience shows that unless core economic problems are addressed, even a durable peace is far from secure.

Shrishti Rana is a researcher affiliated to the University of St Andrews. She works for a Copenhagen-based Institute.