Rep. Rosendale: ‘We Need a Republican Speaker Who Will Challenge The Status Quo’ 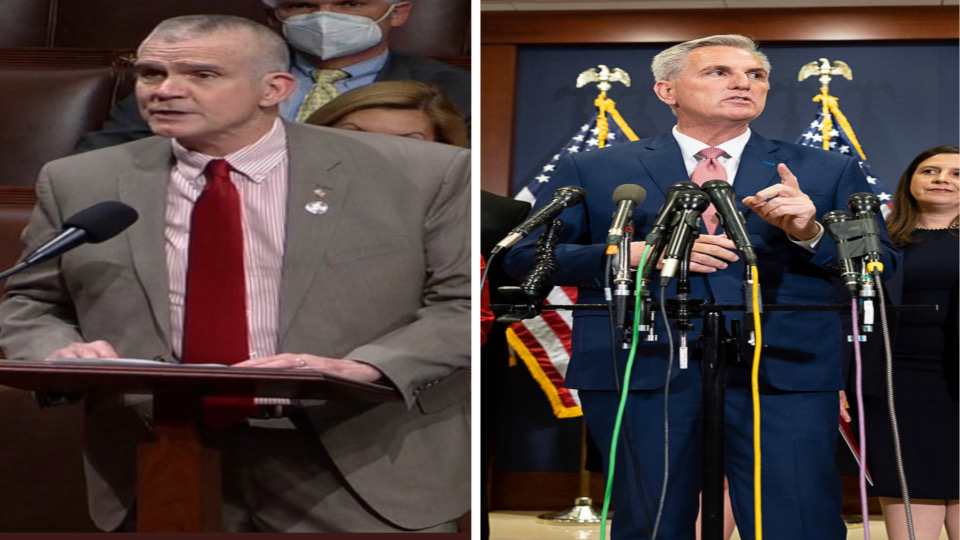 U.S. Rep. Matt Rosendale (R-MT) has repeatedly stated that former House Speaker Kevin McCarthy (R-CA) is unsuited for the role in the upcoming Congress. Rosendale has been one of the more outspoken Republicans in opposition to Kevin McCarthy’s leadership, arguing that the party has failed to stand up to Biden and Congressional Democrats under current GOP establishment leadership. Rosendale is one of five House Republicans who has definitively stated that he will not vote for McCarthy, though U.S. Rep. Andy Biggs (R-AZ) has stated that there are as many as 20 “no” votes.

Rosendale has emerged as one of McCarthy’s biggest detractors following the GOP’s lackluster performance in the 2022 midterm elections. McCarthy, as well as his Senate counterpart in Mitch McConnell (R-KY), have been heavily criticized by the America First wing of the electorate for their funding decisions in the cycle.

Both leaders mounted strong opposition to America First candidates in primary cycles then later failed to provide adequate resources and support in their general election campaigns. Notable examples include U.S. House candidates Anthony Sabatini and Joe Kent, both of whom were on the receiving end of attacks and massive spending from leadership.

Rep. Rosendale has argued that McCarthy has not mounted adequate resistance to Congressional Democrats and President Biden. The Montana Congressman — along with a number of his House Freedom Caucus colleagues — have pressured McCarthy to do away with rules established by Nancy Pelosi.

Rosendale has taken particular issue with McCarthy’s failure to ban earmarks. “Kevin McCarthy ran on curbing wasteful government spending, but he sat back while establishment Republicans voted to keep earmarks,” Rosendale wrote in a tweet on December 2. “We need a Republican Speaker who will challenge the status quo.”

Kevin McCarthy ran on curbing wasteful government spending, but he sat back while establishment Republicans voted to keep earmarks.

We need a Republican Speaker who will challenge the status quo. https://t.co/SjmEnDXxRz

Rosendale has argued that McCarthy would simply be a continuation of the “status quo” on multiple occasions since the election. “Each Member of Congress has earned and deserves equal participation in the legislative process. That will only happen if the House returns to the rules that governed this legislative body before Nancy Pelosi took control,” Rosendale wrote in a tweet on November 14. “Kevin McCarthy isn’t willing to make those changes.”

“He wants to maintain the status quo, which consolidates power into his hands and a small group of individuals he personally selects,” the Montana congressman continued. “We need a leader who can stand up to a Democrat-controlled Senate and President Biden, and unfortunately, that isn’t Kevin McCarthy.”

Rosendale has joined Reps. Matt Gaetz (R-FL), Ralph Norman (R-SC), Bob Good (R-VA) and Andy Biggs (R-AZ) in formally opposing McCarthy’s bid for speaker. Rep. Biggs has stated that the number is much higher, however, with at least 20 “pretty hard no” votes against the current House Minority Leader on January 3.

Biggs, a former House Freedom Caucus chair, ran against McCarthy to be the GOP’s nominee for speaker earlier this month. McCarthy won the vote, 188-31, with five representatives remaining, though McCarthy’s path to the gavel is far from certain.

The longtime House GOP leader will need 218 votes on January 3, the first day of the next session of Congress, in order to become Speaker. As Republicans are set to hold a narrow majority, McCarthy cannot afford to lose many votes.