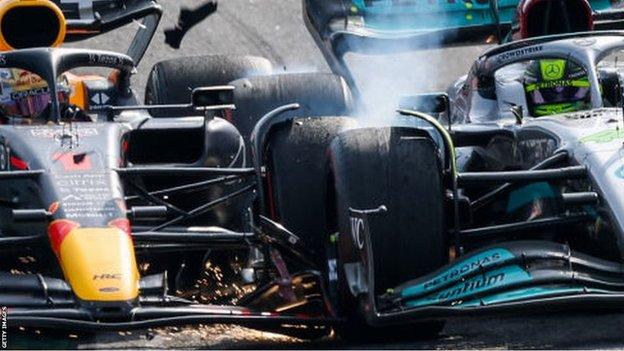 George Russell took a maiden grand prix victory – and a first for Mercedes in 2022 – as Max Verstappen was penalised for a collision with Lewis Hamilton in Sao Paulo.

Russell was in control of the race throughout after Verstappen and Hamilton came together as they disputed second place in the early stages at a safety car restart.

Hamilton dropped to ninth place after the collision with his 2021 title rival but came back to secure a Mercedes one-two and seal the team’s recovery after a difficult season that the eight-time champions started with an uncompetitive car.

Russell’s accomplished drive included him surviving a late safety car that bunched up the field and put Hamilton right behind him heading into the final 10 laps.

The Mercedes drivers were told that they were allowed to race but Russell held the lead at the restart and kept Hamilton at bay until the end.

Behind them, the final 10 laps were a frantic fight as a number of drivers who had had difficult races revived their afternoons.

Among them were Ferrari’s Charles Leclerc – who had been barged off the track by McLaren’s Lando Norris at Turn Five shortly after the Verstappen-Hamilton incident and dropped to the back – and Verstappen himself.

Leclerc was sixth at the restart but moved up to finish fourth behind his Ferrari team-mate Carlos Sainz, as both passed the fading Red Bull of Sergio Perez.

The late caution period also helped Verstappen move up from the bottom of the top 10 to sixth place, just failing to pass Alonso on a race to the line.

Verstappen had been allowed to pass Perez a few laps earlier to chase Alonso, but was told heading into the final lap that he should let his team-mate back ahead if he did not pass Alonso by the final corner. But he did not comply.

Asked what happened, Verstappen said: “I told you already last time, you guys don’t ask that again to me, OK? Are we clear about that? I gave my reasons and I stand by it.”

Perez said over his radio: “It shows who he really is.” 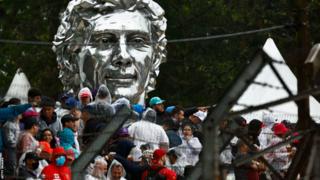 Mercedes went into the race with a front-row lock-out – after Russell’s win in the Sprint race on Saturday and a grid penalty for Sainz, who had finished second ahead of Hamilton – but concerned about the potential pace of Verstappen.

They held their positions at the start only for the safety car to mean they had to do it again a few laps later.

Russell managed the re-start perfectly but Verstappen got a run on Hamilton and dived for the outside into Turn One.

Hamilton fought it out and they collided as they tried to negotiate Turn Two side by side.

Verstappen complained that Hamilton had not left him space but the stewards saw the incident differently and gave Verstappen a five-second penalty, declaring that he had been “predominantly at fault”.

That left Perez as Russell’s only realistic rival for the win, but after managing his pace for the first few laps the Briton obeyed a request from the team to up his pace and build a gap and Perez had no answer.

As Russell took control of the race, the question was how far could Hamilton climb back up the field in his recovery and it soon became apparent he had a chance of second.

Hamilton ran longer on his first set of tyres to give himself a pace off-set. He stopped six laps later than Perez and emerged in fourth place also behind Sainz.

Sainz, whose race was disrupted early on by a forced early pit stop when a visor tear-off got caught in a rear brake duct, pitted out of the way, and Hamilton caught and passed Perez with 26 laps to go.

Eight laps later, more jeopardy was introduced when Norris’ McLaren stopped on track and first the virtual safety car and then the safety car were deployed.

But none of the main runners stopped for tyres and the result then depended on who had the freshest rubber.

Perez, who had made his last stop earlier than others and fitted medium tyres rather than softs, was left vulnerable and he succumbed to Sainz, then Leclerc and then Verstappen, who he was ordered to let by so the world champion could try to take points off those ahead of him.

Verstappen made no further progress, though, leaving the Red Bulls sixth and seventh, ahead of Alpine’s Esteban Ocon, Alfa Romeo’s Valtteri Bottas and Aston Martin’s Lance Stroll and Sebastian Vettel.