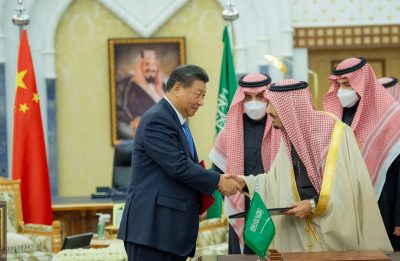 Saudi Arabia’s decision in October to spearhead a two million barrel per day cut in OPEC+ production quotas, and the harsh US response to it, is only the most recent example of the drift in Saudi–US relations. The dispute risks opening up space for China to expand its political influence in the region to the detriment of the United States and its allies.

In December, President Xi Jinping visited Riyadh for the first China-Arab States summit as well as a China-GCC summit and bilateral meetings with the Saudis. Riyadh’s lavish reception for Xi was in stark contrast to the more muted reception of President Biden. Both China and Saudi Arabia used the visit to showcase the importance they attach to their deepening bilateral relationship.

Given the strong security ties between Gulf Cooperation Council countries and the United States — as well as China’s ties to Iran, and its reluctance to act as a security guarantor for the region — China cannot replace the United States in the near term. But amid US concerns about competition with China, expanding Chinese cooperation with the region complicates US security collaboration and risks exacerbating US–Saudi disputes.

Gulf actors have also highlighted concerns about continued US commitment to the region. The rise of US shale oil and gas production led some Americans to talk about energy independence and a declining US interest in the region. Gulf countries were particularly concerned about what they saw as Washington’s support for destabilising revolutions in the US response to the Arab Spring. The 2015 Joint Comprehensive Plan Of Action nuclear deal with Iran, Barack Obama’s ‘Pivot to Asia’ and Donald Trump’s failure to respond aggressively to Iranian attacks on Saudi oil infrastructure only reinforced these concerns.

The mutual drift helps explain Saudi Arabia’s decision to cut OPEC+ production quotas and its own production by over 500,000 barrels per day, despite reported US requests to the contrary. The Saudis argued that they took the decision based on their own economic interests and not as a deliberate decision to support Russia in its war against Ukraine.

Saudi Arabia’s fiscal break-even point for the price of oil is just over US$70 per barrel. Prices had dropped sharply from August until the beginning of September and were projected to ease further by the end of the year. Given Crown Prince Mohammed bin Salman’s reported animosity toward the Biden administration and his extensive control over Saudi decision-making, it would be impossible to rule out that the decision was at least partially politically motivated.

No matter what drove Saudi Arabia’s decision, in the current era of mistrust the impact in Washington would likely have been the same. At the very least, it sends a signal that Riyadh is much less interested in taking US interests into account when making its decisions. The supply cut appears to be a further effort to demonstrate Saudi power and independence.

Looking forward, this dispute would seem to open up further opportunities for Chinese influence in the region. Riyadh and some of its neighbours have already been looking to cooperate with China on technology and security. Beijing is dependent on energy from the Persian Gulf and Iraq and Saudi Arabia have become two of its most important energy engagement partners in China’s Belt and Road Initiative.

Security cooperation is also growing. Chinese defence exports to the region have sharply increased, as have Chinese efforts to help develop military industries in the region. According to press reporting, Saudi Arabia may now be producing ballistic missiles with Chinese assistance. Saudi and Chinese military forces have also held joint exercises in both countries.

The latest US National Security Strategy focusses on competition with China and Russia but recognises the importance of the Persian Gulf. As Washington’s allies, including Japan and South Korea, are still reliant on energy from the region, supply cuts or price spikes will continue to affect US interests.

The region is likely to become even more important over the next few decades. Even if overall production declines because of rapid decarbonisation, the share of global oil produced in the Persian Gulf is likely to increase. The United States and Saudi Arabia still share interests in maintaining a strong relationship, even if the nature of that relationship may be changing. Both sides have a responsibility to help address current misunderstandings and suspicion.

Relationship sceptics rightly point to the fact that Saudi Arabia’s military reliance on the United States and China’s limited power projection capabilities make it impossible for China to replace the United States immediately, even if it wanted to. But they fail to acknowledge that even marginal changes could impact the security interests of the United States and its allies and that increased US–Saudi disputes are only likely to hasten disengagement.

Oliver B John is founder and president of Astrolabe Global Strategy and a non-resident scholar at the Middle East Institute.