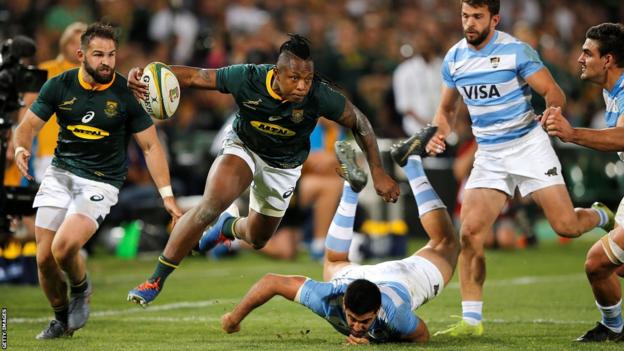 South Africa’s World Cup winner Sbu Nkosi, who was reported missing by his club side the Bulls, has been found “safe and sound”.

A statement by the Pretoria-based outfit said the 26-year-old winger was located just after 14:00 local time on Monday.

The Bulls had opened a missing person case with the police on 17 November, six days after the club last had contact with Nkosi.

“Once it was established that Nkosi was safe, unharmed and in a position to speak, chief executive Edgar Rathbone went into Nkosi’s home (with the permission of the player),” a statement on the Bulls website said.external-link

The club added that Rathbone spent time with the Springbok “to understand how best the company can provide him with the support he needs and what that support is”.

Local media in South Africa reported that Nkosi was found at his father’s house in Emalahleni, just over 100 kilometres east of Pretoria.

Nkosi has scored nine tries in 16 Test appearances and was part of the South Africa squad that won the 2019 World Cup.

However, he missed out on their autumn internationals because of a rib injury.

The Bulls said the club had made “lengthy and extensive efforts” to find Nkosi and thanked sponsors SSG, a business which includes a security company, which it said had “gone beyond their commercial responsibility”.

“We wish to extend a vote of thanks to all the members of the public who shared information that contributed to our search,” the statement added.

“We wish to also express a word of thanks to the international community who also joined the call and efforts in searching for Nkosi.”

Nkosi has faced disciplinary challenges with the Bulls, and was sent home early for breaking team protocol during a trip to Ireland for a United Rugby Championship fixture in October.

The Bulls said the club would not comment further on the matter of Nkosi’s disappearance.