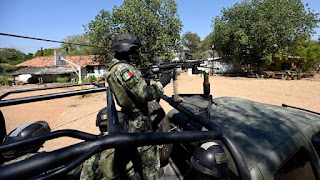 The gunmen apparently belonged to the Pájaros Sierra criminal group, which operates in the states of Michoacán and Jalisco.

Michoacán has become a land of bloody drug wars and constant confrontations, as occurred in the municipality of San José de Gracia, where an exchange of bullets between the military and hired killers left five criminals dead and one injured.

The violent incident occurred when members of the Mexican Army were patrolling the borders of Michoacán and Jalisco and were suddenly attacked by a group of armed men, according to initial reports.

The military repelled the aggression and shot down four armed civilians, presumably linked to the Pájaros Sierra criminal group, leaving two others wounded.

In the same incident, three gunmen were arrested and 10 firearms were seized – nine long guns, one short gun and 44 magazines of various calibers. In addition, a white Mitsubishi double-cab pickup truck used by the criminals was also seized.

After the shooting, the injured assailants received first aid and were detained; one of them died while being transported to the hospital. State police and police from nearby municipalities mobilized to the area to provide support and implement an operation in the region.

San José de Gracia is a border area between Michoacán and Jalisco, which is disputed by at least two criminal cells that have been involved in several clashes in recent months.

Several of these clashes have been documented on video, in which you can hear the shots of high caliber weapons, and even foreign citizens have witnessed these situations. All this has caused the U.S. government to issue an alert recommending its citizens not to transit through the area.