SPEAKER FIGHT! Andy Biggs: “Republicans Must Get Behind Someone Who Will Fight For America First Agenda” 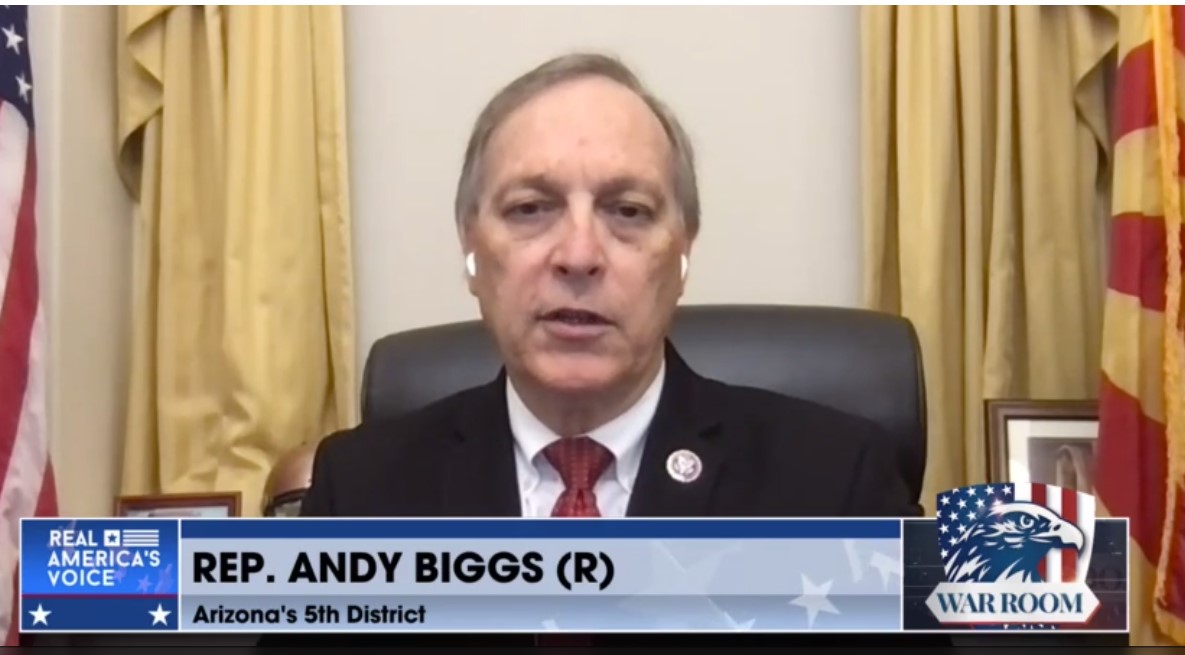 Representative Andy Biggs (R-AZ) appeared on the War Room program with Steve Bannon on Tuesday to send a message to Republicans that he intends to challenge squishy US Rep. Kevin McCarthy for the powerful position of Speaker of the House and that he isn’t afraid to stand up for himself or someone else to take the position away from the vengeful McCarthy.

Biggs made a great point- he reminded people that unity doesn’t have to happen behind McCarthy- unity can happen behind another candidate. Biggs said that Republicans can and should unify behind someone who will defend America First policies-and that is not Kevin McCarthy- period.

When asked why he announced on Monday that he is running for Speaker of the House, Biggs answered: “There’s a lot of reasons Steve, but not the least of which is- it’s time for a change. We have to change the status quo. The status quo is the sub-optimal path for both Republicans and this nation. So we have to make the change and, and I know that you’ve got people that are saying, oh- don’t do it no because the margin is too thin. They would have said if we had a 25-seat majority not to do it now because the large and is so great.”

Biggs had some specific suggestions about how the changes he wanted to see:

“If you want to have good policy, you have to have good procedure. How about if you open up the Appropriations process in such a way that you actually can reduce inflation? You have to fix the internal Structure to do it because it’s not set up to do fix that.”

“The same thing to any kind of conservative idea. Donald Trump actually had this right when he talked about the swamp and the uni-party. And what goes on here? Well, these people all decide all prefer the structure of the way it is because they profit off it. In order for the American people to profit off that you need Constitutional constraints.”

“And so you use that- that is how simple it is, and I mean seriously simple, saying a single subject rule on bills. No more 3000-page bills that are given to people with one hour before you vote and saying you got to vote to know what’s in it. Those things are structural, and they’ve gotten worse under Pelosi, but they were bad under the previous administration. How about you still allowing members of Congress to go to the floor, and I moved to amend? ”

Rep. Biggs continued to talk about the things that need change the most:

“We haven’t had an open Amendment process in six years. Steve, six years. So that’s the structure. How about we find those agreement points that are America First in nature and and put those up in a very simple fashion, not buried under thousands of pages of crap and just say, let’s build up a fence.”

“They want to fence and let’s fund it, build it and go forward. And then the other thing is- and this is what’s key. I think to Steve due to altering the status quo.”

Biggs admitted his candidacy is a long shot:

“If we get a significant number of votes, then Kevin will still be the nominee, but he has to fight it out and we have to have an internal fight and discussion and maybe we can exit the path of this status quo that’s defeating this country.”

The Arizona rep talked about how people can keep track of what is unfolding:

“By December 16th, you’ll have a pretty good idea whether Mr. McCarthy is fit for the job, and I think a lot of people would say they’d already seen his performance and determined he isn’t.”

“I love Marjorie as, you know, we’ve worked together side by side and taking our licks together and fought this battle. But I think she is wrong here. I say that if you don’t make a chance because you have a small majority, you won’t do it because we have a significant majority, or you won’t do it because we’re in the minority. When will you make a change? When will you make a change? Everything is fraught with risk. I don’t think this is a serious risk, though.”

He talked about the idea that it is too risky to displace McCarthy:

“I don’t think even the Republican who said he would go to Democrats wants to see a Democrat leading you. Now when we have a majority I said, I don’t think that’s realistic. I think what’s much more realistic it doesn’t necessarily mean you have to unite behind Kevin McCarthy, for Pete’s sake. You can the United behind me, and if I’m not the guy, then find a different consensus candidate.”

“Let’s unite behind somebody who will actually invoke America First policies and that’s what we need to do Steve, this country is ripe for it. This body is right. For reform and transition and we have to exit the sub-optimal path and build a new path it might have some short-term pain, but will have long-term consequences and rewards that that will make this country a better place. Make this institution of our better, more responsive Institution.”

“And I would just tell you, it’s a secret ballot. Lot of people don’t realize that this ballot days. Secret ballot. And there are people who who Want to vote. No for Kevin but they don’t want him necessarily to know it because he might exact retribution against them, and that’s also a crappy way to lead it this body.”

The fight is just heating up, with a leadership vote happening Tuesday and a final vote to happen sometime in January.